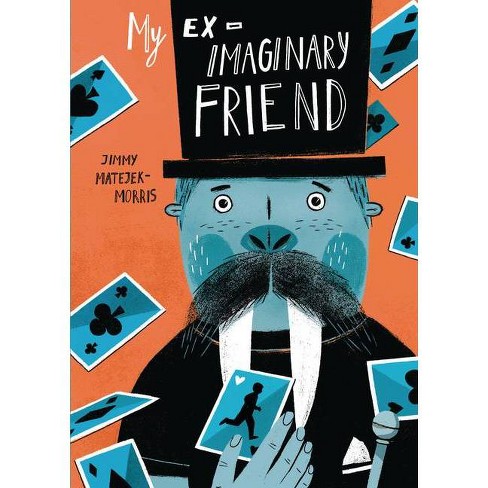 Told in two voices, eleven-year-old Jack and the imaginary friend he thought he'd outgrown, George, find each other again when Jack's family hits a crisis.

Eleven-year-old Jack thought he had outgrown his imaginary friend, George--until his dad also disappears from his life. His mom's bipolar disorder isn't being properly treated, so while in the throes of a manic episode, she ditches Jack with his aunt, uncle, and cousins. Jack decides that only George can help him figure out where people go when others stop believing in them--and how Jack can put his family back together.

Meanwhile, the imaginary George--half-walrus, half-human, all magic--has a problem of his own: with nobody to believe in him, he is slowly disappearing. Rejoining Jack is his only hope for survival. Or is it?

Twin themes of abandonment and belief twine through this somewhat mind-bending debut. Less than a year after 10-year-old Jack's dad moved out, Jack's mom's mistreated bipolar disorder sends her running, too--and suddenly Jack's half-forgotten, part-walrus imaginary friend George is back in his life. George, who shares narrative duties in alternating first-person chapters, is delighted, as ever since Jack outgrew him, he has been disappearing bit by bit. Jack has an aunt and stepuncle to take him in temporarily, and though they make awkward attempts to help him understand that his mom isn't crazy, just sick, it's really through his own efforts that Jack comes to truly believe that, flawed as they both are, his parents still love him. In the process, he discovers that he might not need George as much as he thought. George, meanwhile, may not get older, but he is going through a coming-of-age of his own (shades of The Velveteen Rabbit or maybe Pinocchio). Readers may be left a little dizzy, though happy to watch both protagonists find their feet.--Booklist

Jack's imaginary friend George is quite unique. He is part walrus, part human, and a fabulous magician. He is also disappearing. That is what happens when your human gets older and doesn't have as much time for you. Jack doesn't need an imaginary friend anymore (or so he thinks). Then Jack's life gets turned upside down when his mom, who has bipolar disorder and is experiencing a manic episode, unexpectedly leaves him with his aunt, uncle, and cousins to go find herself. Jack then turns to his faithful friend George for help. Jack and George team up to help the boy figure out how to get his mom to come back, or to find his dad that left their lives months ago. Armed only with an emergency cell phone and a pack of playing cards, the friends run away to find a family that may not want to be found after all. With frank talk surrounding mental illness and what it really means to be a family, this is a story about a boy and his imaginary friend who are desperate to figure out where they belong. VERDICT A poignant, multilayered story that will appeal to those looking for a heartfelt family drama.--School Library Journal

Ten-year-old Jack's father has left the family, and his mother struggles with bipolar disorder; George, his part-human/part-walrus imaginary friend, comes and goes from his life.

One day Jack's mother drops him on the road near his aunt's house, leaving him to be taken in by his aunt, uncle, and cousins. In a story narrated in alternating first-person chapters from Jack's and George's points of view, readers follow along as George and Jack navigate what it means to be seen. As Jack's situation changes, George faces his own challenge: He finds that he is physically disappearing as Jack needs him less. Magic and imagination come into play as George and Jack each realize their strengths and gain a sense of being believed in. This book addresses difficult topics, including mental health crises, family tumult, divorce, and forgiveness. Emphasizing that all people cope in different ways, the story leaves room for a range of strong feelings as readers follow George and Jack on their adventures. For some readers, extremely painful scenes of child abandonment and parents in crisis may need to be mediated by a trusted adult. The writing style, with its repetitive cliffhangers and complex dialogue, could be confusing for some readers. Human characters default to White.

Complicated emotions and difficult family conversations are bracketed with kindness in this unusual book.--Kirkus Reviews