My Fate According to the Butterfly - by Gail D Villanueva (Hardcover) 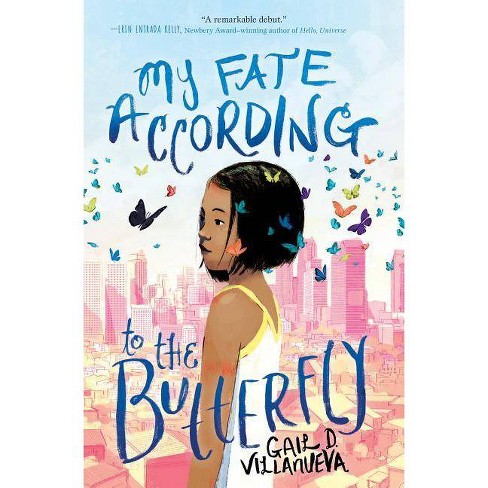 In one week Sabrina will be eleven-years-old and she would really like to get her estranged parents and her older sister Nadine together for the celebration, especially since the black butterfly landing on her locket has convinced her that she is going to die; Sabrina and her friend Pepper come up with a bucket list, and enlist Nadine's help--but aspiring reporter Nadine is working on a story about the Philippines' war on drugs, and she has uncovered something that may endanger them all, and prove the butterfly is indeed a harbinger of death in Manila.

* Villanueva's debut is a beautiful #ownvoices middle-grade novel. Tough topics are addressed, but warmth and humor... bring lightness to Sab's story. This immersive novel bursts with life. -- Kirkus Reviews, starred reviewWhen superstitious Sab sees a giant black butterfly, an omen of death, she knows that she's doomed! According to legend, she has one week before her fate catches up with her -- on her 11th birthday. With her time running out, all she wants is to celebrate her birthday with her entire family. But her sister, Ate Nadine, stopped speaking to their father one year ago, and Sab doesn't even know why.If Sab's going to get Ate Nadine and their father to reconcile, she'll have to overcome her fears -- of her sister's anger, of leaving the bubble of her sheltered community, of her upcoming doom -- and figure out the cause of their rift.So Sab and her best friend Pepper start spying on Nadine and digging into their family's past to determine why, exactly, Nadine won't speak to their father. But Sab's adventures across Manila reveal truths about her family more difficult -- and dangerous -- than she ever anticipated.Was the Butterfly right? Perhaps Sab is doomed after all!

A Kirkus Reviews Best Book of 2019An Amazon Best Book of the Month Editor's Pick NCSS-CBC Notable Social Studies Trade Books for Young PeopleSuperstition, family, and friendship are the hallmarks of this remarkable debut. I adore Sab -- and readers will, too. -- Erin Entrada Kelly, Newbery Award-winning author of Hello, UniverseGail Villanueva's debut novel captures all the richness of the Philippines, the heart-pounding thrills of a great mystery, and the warmth and wonder of growing up. -- Kate Messner, author of The Seventh Wish and BreakoutAt once rich in the vibrant culture of the Philippines and universal in its focus on family and forgiveness, My Fate According to the Butterfly is a soaring tale of hope that will be sure to touch the hearts of all young readers. -- Ruth Behar, Pura Belpré Award-winning author of Lucky Broken Girl* Villanueva's debut is a beautiful #ownvoices middle-grade novel. Tough topics -- the brutal war on drugs in the Philippines, family reconciliation, and recovery -- are addressed, but warmth and humor... bring lightness to Sab's story. This immersive novel bursts with life. -- Kirkus Reviews, starred reviewDebut author Villanueva deftly incorporates a touch of the magical alongside vibrant details about contemporary Filipino life and a universal story about growing up, reconciliation, and family. -- Publishers WeeklyA gentle title that skillfully addresses difficult issues of drug addiction and family tension from the perspective of a young girl. -- School Library Journal

Gail D. Villanueva is a Filipina author born and based in the Philippines. She's also a web designer, an entrepreneur, and a graphic artist. She loves pineapple pizza, seafood, and chocolate, but not in a single dish together (eww). Gail and her husband live in the outskirts of Manila with their dogs, ducks, turtles, cats, and one friendly but lonesome chicken. Her debut novel My Fate According to the Butterfly was named a Best Book of the Year by Kirkus Reviews.
If the item details above aren’t accurate or complete, we want to know about it. Report incorrect product info.