My Little Pony/Transformers: The Magic of Cybertron - by James Asmus & Sam Maggs (Paperback) 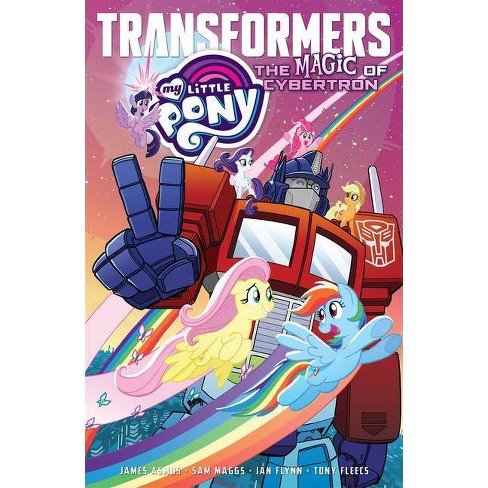 More ponies, more bots, and more magical mayhem as two worlds collide in the return of this hit crossover event! While using a modified Spacebridge to bring magic to Cybertron, the Decepticons end up unleashing a more powerful evil from Equestria than they ever could've imagined--looks like the only way out of this one is to team up! New partnerships will have to be created--the Seekers and the Wonderbolts; Applejack and Wildwheel; Soundwave and Octavia; and many more!--in order to recapture the magic of their first meeting and save the day! All of this and more in the second My Little Pony/Transformers crossover! Brought to you by writers James Asmus, Sam Maggs, Ian Flynn, and Tony Fleecs with artists Jack Lawrence, Casey W. Coller, Priscilla Tramontano, and Trish Forstner.

James Asmus is an award-winning writer originally from Cleveland, OH. He has written comics, theater, TV, animation, and more. His comic book work includes Gambit, Thief of Thieves, Kong of Skull Island, Evolution, The End Times of Bram & Ben, and Quantum & Woody-which earned him five Harvey Award nominations, including Best Writer. He currently lives in Portland, OR with his wife and two awesome kids.

Sam Maggs is a bestselling author of books, comics, and video games. She's been a senior games writer, including work on Marvel's Spider-Man; the author of many YA and middle-grade books like The Unstoppable Wasp, Con Quest!, Tell No Tales, and The Fangirl's Guide to the Galaxy; and a comics writer for beloved titles like Marvel Action: Captain Marvel, My Little Pony, and Transformers. She is also an on-air host for networks like Nerdist. A Canadian in Los Angeles, she misses Coffee Crisp and bagged milk.
If the item details above aren’t accurate or complete, we want to know about it. Report incorrect product info.