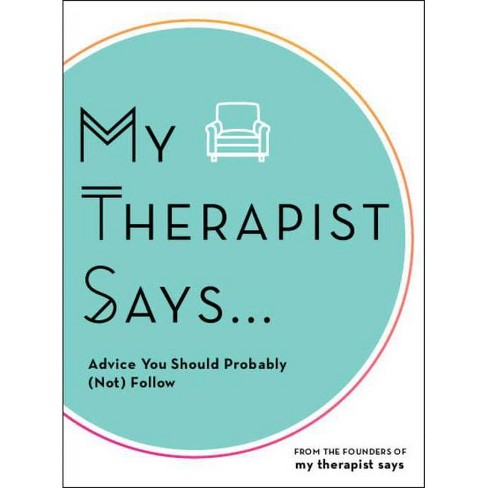 From the team behind the super-popular Instagram @MyTherapistSays comes this humorous guide that chronicles the exhausting task of navigating the daily, anxiety-ridden struggle that we fondly call life. Including hilarious memes MTS is known and loved for, along with checklists, prompts, questions from readers, and more, My Therapist Says is the guide you need to achieve your goals, one wrong turn at a time. Have you ever wanted something, pursued it (albeit not quite as gracefully as you would've hoped), failed, and then genuinely asked yourself the question, "Am I delusional?" Well, that's how I began penning this magnum opus. Like the Buddhist's have their Tripitaka, you have...moi. And my therapist, though it's unlikely she'll admit this in public. On the receiving end of a ghosting session? Needing a way to leave a work function without looking like a buzzkill? Having a hard time developing amnesia about your last relationship? Fear not, as I cover everything from circumstantial etiquette to blissful delusion when necessary. So, grab a pen, a box of tissues, a glass of wine, and your bestie, because sh*t is about to get real. And remember, be yourself, be kind, and all that jazz, unless you're a Susan*. If that's the case, try to be literally anyone else. Ugh, my therapist hates that I wrote that. *Susan: Noun and verb. Unpleasant, annoying, and delusional, the Susan is somebody who is literally awful in every way, is liked by no one, but has no clue, no matter how many open clues you give her. If you roll your eyes at this, you're probably a Susan. Uses: Susaning, Susanism. For even more on navigating the mystical tornado of life, get the companion coloring book: My Therapist Says...to Color: Ignore Reality and Color Over 50 Designs Because You Can't Even.

My Therapist Says is the brainchild of four best friends and sisters, who needed an outlet for both their anxiety and their ridiculous stories, which they felt would be better chronicled anonymously, with the humor their friends have come to expect from them.

All hailing from Canada, the girls used the account to keep in touch with each other's lives by meme-ing about their travels away from home. Within a year, the Instagram became a viral sensation and grew into a business of its own. Their biting sarcasm, keen sense of humor, and general delusion has garnered 5+ million followers, a marketing company, and a mental health initiative. With a goal of destigmatizing mental health, and finding the humor in the mistakes their mental health journeys have led them on, the team behind @mytherapistsays has decided the next outlet for them is a book: My Therapist Says: Advice You Should Probably (Not) Follow, a compilation of what they've learned along the way, with a very exhausted therapist. The team is also the author of the coloring book companion, My Therapist Says...to Color: Ignore Reality and Color Over 50 Designs Because You Can't Even. They now reside in Toronto, Los Angeles, and New York.
If the item details above aren’t accurate or complete, we want to know about it. Report incorrect product info.