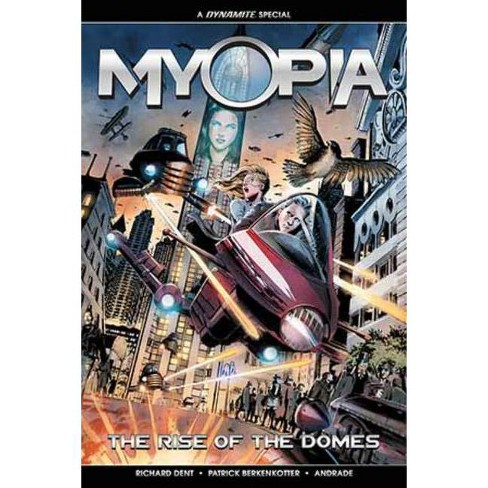 A homeless man is mysteriously abducted. A journal is left on the edge of a subway platform, filled with stories about a world that doesn't exist. Not far from here a scientist is murdered in cold blood. The only clues are his burned down lab. A magnetically propelled motorcycle, and a man walking around New York City with the last living falcon on the planet. Imagine a world where your every thought, your every move, is filtered through The Central Lens Network. Now imagine being a twelve-year old boy and discovering a special pair of lenses that allow you to access this network undetected. This is exactly what happens to Matthew Glen the day his father is murdered then two years later mysteriously appears back in his life. In a style that echoes back to the Dark Age of Comics when graphic novels were coming into an art form of their own, Myopia" merges science fiction with noir steampunk into a thrilling alternative reality, where government and big business use entertainment devices to cover up a new authoritarian landscape.

A virus has been planted in mysterious domes located at the Earth's magnetic poles. The government continues to work to decode the virus, while the main characters, Molly and Matthew, face betrayal and other dangers. -- Publishers Weekly

Myopia is fascinating to follow. Dent leads us along with a Lost-like quality, generating plenty of interest by continuing to develop the story with layers of mysteries. This chapter continues to set the stage for a world that has plenty of story left to give, and the fact that it ends with a suspenseful-- [enter sound effect from the end of each Lost episode] MYOPIA. -- S.T. Lakata, Fanbase Press

As a work of science fiction, here's plenty about Myopia to recommend. It's commentary on social media dependency and global climate change are clear without being preachy or distracting from the larger narrative. The mysteries it sets up are compelling, and the setting feels fully realized. --Mike McNulty, bamsmackpow.com

Tell us if you've got both eyes focused on this fresh-faced steampunk follow-up from Dynamite. -- Jeff Spry, Syfywire.com

Myopia remains an enjoyable and original experience. The character of Chase is a compelling central figure, and his relationship with Matthew is interesting and well-drawn. The supporting characters have personality and well-defined motivations, and the threat of the domes and the already-sinister machinations of Formula Media are intriguing. I don't want to spoil the story, but the reader can feel it building momentum throughout, and the shape of the issue serves to accentuate an increasing sense of foreboding. --Jeremy Radick, Capelesscrusader.org

Myopia is a solid read for those who like their sci-fi hard and wordy. The story is interesting, the characters are well formed, and the art is absolutely gorgeous. I can recommend this to anyone up for this kind of heavy reading. --Joshua Davison, Bleeding Cool
If the item details above aren’t accurate or complete, we want to know about it. Report incorrect product info.