Never Have I Ever ( The Lying Game) (Hardcover) by Sara Shepard 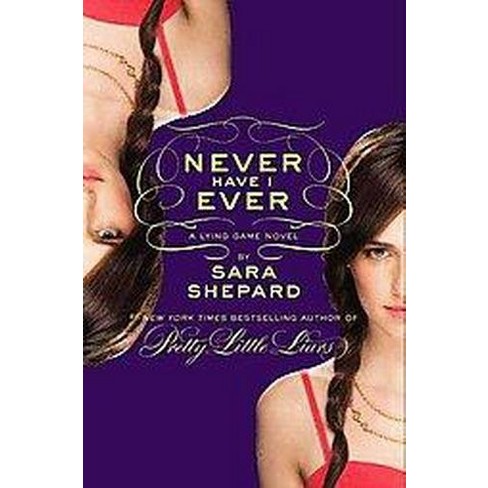 From the "New York Times"-bestselling author of the Pretty Little Liars series comes the second book in her new series. When Emma Paxton takes over her missing twin's life, she discovers that the consequences of lying could be deadly.

Sutton Mercer is dead, but only a few people know it. Her long-lost twin, Emma, has stepped into her shoes--doing her best to flirt with Sutton's boyfriend, hang with her friends, and live with her family all while tracking down Sutton's murderer. But the killer wants Emma to keep playing the part of Sutton--after all, no missing person means no investigation--and will do anything to make sure Emma toes the line...or else.

My perfect life was a lie.

Now I'd do anything to uncover the truth.

Not long ago, I had everything a girl could wish for: amazing friends, an adorable boyfriend, a loving family. But none of them know that I'm gone--that I'm dead. To solve my murder, my long-lost twin sister, Emma, has taken my place. She sleeps in my room, wears my clothes, and calls my parents Mom and Dad.

And my killer is watching her every move.

I remember little from my life, just flashes and flickers, so all I can do is follow along as Emma tries to solve the mystery of my disappearance. But the deeper she digs, the more suspects she uncovers. It turns out my friends and I played a lot of games--games that ruined people's lives. Anyone could want revenge . . . anyone could want me--and now Emma--dead.

"A fun and fast-moving mystery...[readers] will race through the pages as Emma pieces together clues and will have plenty to ponder as they anticipate the next installment."--Publishers Weekly Praise for The Lying Game: "The Lying Game is a stay-up-past-your-bedtime type of thriller...full of amazingly believable plot twists and turns."--Voice of Youth Advocates (VOYA) (starred review) "A thrilling mystery with just the right doses of romance and danger."--School Library Journal
If the item details above aren’t accurate or complete, we want to know about it. Report incorrect product info.