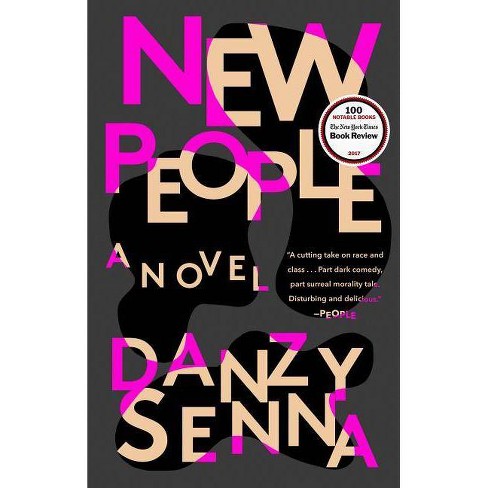 Named a BEST BOOK OF THE YEAR BY THE NEW YORK TIMES BOOK REVIEW, VOGUE, TIME MAGAZINE, NPR and THE ROOT Named A 2017 BEST SUMMER READ BY

Vogue - Elle - Harper's Bazaar - Glamour - Buzzfeed - In Style - Men's Journal - Bustle - Ms. Magazine - Pop Sugar - Newsday - The Millions - Time Out - Bitch - CNN's The Lead - The Fader [A] cutting take on race and class...part dark comedy, part surreal morality tale. Disturbing and delicious. -People You'll gulp Senna's novel in a single sitting--but then mull over it for days." -Entertainment Weekly Everyone should read it. -Vogue From the bestselling author of Caucasia, a subversive and engrossing novel of race, class and manners in contemporary America. As the twentieth century draws to a close, Maria is at the start of a life she never thought possible. She and Khalil, her college sweetheart, are planning their wedding. They are the perfect couple, King and Queen of the Racially Nebulous Prom. Their skin is the same shade of beige. They live together in a black bohemian enclave in Brooklyn, where Khalil is riding the wave of the first dot-com boom and Maria is plugging away at her dissertation, on the Jonestown massacre. They've even landed a starring role in a documentary about new people like them, who are blurring the old boundaries as a brave new era dawns. Everything Maria knows she should want lies before her--yet she can't stop daydreaming about another man, a poet she barely knows. As fantasy escalates to fixation, it dredges up secrets from the past and threatens to unravel not only Maria's perfect new life but her very persona. Heartbreaking and darkly comic, New People is a bold and unfettered page-turner that challenges our every assumption about how we define one another, and ourselves.

[Senna] explore[s] what happens when races and cultures mingle in the home -- and under the skin...Her new novel, the sinister and charming New People, riffs on the themes she's made her own -- with a twist. It's a novel that reads us. It anticipates, and sidesteps, lazy reading and sentimental expectations... The material is hot but the style stays cool... Senna's aim is precise and devastating...There is no easy consolation in New People. But in its insistence on being read on its own terms, its commitment to complexity, it does something better than describe freedom. It enacts it." -New York Times [A] cutting take on race and class...part dark comedy, part surreal morality tale. Disturbing and delicious." -People "An of-the-moment novel [that] tackles identity and infatuation...slender but powerful, as seductive and urgent as a phone call from an old flame. At first blush, the book seems like a straightforward love story...but it's more complicated than that... This is not a book about race disguised as a romance, nor is it a love story saddled with a moral. Senna's achievement is that she interlaces both threads in one ingenious tale." -O, the Oprah Magazine You'll gulp Senna's novel in a single sitting--but then mull over it for days." -Entertainment Weekly

"Slick and highly enjoyable...Thrillingly, blackness is not hallowed in Senna's work, nor is it impervious to pathologies of ego. Senna particularly enjoys lampooning the search for racial authenticity...Identity, far from being a point of solidarity, is a beckoning void, and adroit comedy quickly liquefies into absurd horror." -New Yorker

"Danzy Senna delivers her finest and funniest work yet...[she] writes with a dexterous command of character and language. And she unleashes a razor-sharp sense of humor that take aim at and slices through notions of political correctness, identity politics and hypocrisy...achingly funny...and deeply affecting. -Essence

"A darkly comic novel about race, about false utopias, and about the fine line between seemingly innocuous, everyday groupthink--the kind that's the price of admission for being part of a marriage, or a band of friends, or a tribe of any sort.... Senna writes beautifully about the complexity of identity, the intersection of racial consciousness, and class awareness, and individual perspective." -Vogue "Senna's thriller-like novel is a stirring exploration of race and identity, and, a propulsive look at a fantasy playing out before one's eyes." -Esquire "Compulsively readable." -Buzzfeed Books "It says a great deal for New People -- Danzy Senna's martini-dry, espresso-dark comedy of contemporary manners -- that its compound of caustic observations and shrewd characterizations could only have emerged from a writer as finely tuned to her social milieu as [Jane] Austen was to hers... artfully strewn with excruciating and uproarious misperceptions...[New People] doesn't pour cold water on one's expectations for a better, more tolerant world. In fact, it implies that world has, to a great extent, already arrived." -Newsday "Set in the Rodney King-era '90s, New People is as mesmerizingly fast-paced as it is deeply reflective of monumental truths that resonate perhaps even more powerfully two decades in the future." -Harper's Bazaar "The thorniness of desire is inextricably intertwined here with the fraught history of race in America, and, as in Senna's previous work, she aims to satirize characterizations of racial identity at every turn... Maria's deliberate refusal to embrace a more hopeful future keeps eating away at her, leaving her in a potentially ruinous fix by the end of her unresolved story. And yet that refusal -- and this novel -- is also an antidote to the attempt to dismiss continuing racial inequalities within a narrative of progress. Yes, right now, it's knotty, and uncomfortable, and depressing. And we must not look away." -San Francisco Chronicle "A darkly comic psychological thriller...Senna's antiheroine is winningly vulnerable... and New People is at its best when it delves into the worlds of Maria's construction, or reconstruction... [she] wanders the city in a daze, ricocheting from bad decision to bad decision, barely dreaming at all. Her life seems like it will never make room for the answers she seeks, and Senna enjoys every second she takes to make that clear." -Village Voice "A provocative conversation starter...with bite and brains... invigorating." -Paste Magazine

The frankness with which New People treats race as a kind of public performance is both uncomfortable and strangely cathartic. ... Provocative. -Wall Street Journal

"Agile and ambitious... a wild-hearted romance about secrets and obsessions, a dramedy of manners about educated middle-class blacks - the talented tenth - that is Senna's authorial home ground." -Elle "A paean to the psychosocial complexities of being racially mixed...The novel's ultimate message seems...to be one both true and unsettling, if unsurprising: that color-lines have never left America and likely never will." -Los Angeles Review of Books

"Oooooo, this book! Senna has created an engrossing story of race and class in contemporary America...It's fantastic! You can practically hear it sizzle in your hands." -BookRiot

"A thoughtful, earnest, witty discussion on race." -Marie Claire "A brilliant, thoughtful treatise on race and identity in the 21st century." -Pop Sugar "[A] taut novel about a couple grappling with guilt, race, and desire in the late '90s." -Esquire "Compellingly provocative... [Senna] creat[es] a dense psychological portrait of a black woman nearing the close of the 20th century: inquisitive, obsessive, imaginative, alive. -New Republic "Senna's meditation on 1996 America and its false sense of progress is an eerie picture of society today, too. With a dark sense of humor, Senna builds her story with a horror-like tension that releases with a tongue-in-cheek sigh. Sure to keep readers riding white-knuckled to the end." -Booklist

"Danzy Senna's latest stunner of a novel is both political and bingeable, worthy of a one-sitting read" -Vulture "Provocative...Expertly plotted and full of dark humor, New People is a thoughtful and unforgettable look at race and class at the dawn of the 21st century." -BookPage "Danzy Senna's latest novel is the best of her writing. It's rich, nuanced, and in some respects, scary. The question at its core is: What happens when your perfect life isn't enough?" -Bitch

"New People will challenge your assumptions about how you define yourself and others."
-HelloGiggles

"An achievement in so many ways. It succeeds, to begin with, in capturing the psyche of a woman worn down by expectation. It also convincingly distills the essence of an "intentional community" in bohemian black Brooklyn. And it manages to send up the literary tropes of biracial representation, in particular that of the "tragic mulatto," a mixed-race person who's traumatized by their inability to fit neatly into distinct racial categories and their attendant social schema. Senna plugs that legendary trope into the classic humor machine. ...With New People, Senna appears to have written the book she was waiting for." -The Baffler

"An absolutely brilliant darkly comic wild ride of a novel--it's completely fearless and subversive while at the same time incredibly honest and accurate in how it approaches race and class." --Porochista Khakpour, LitHub

"A darkly comic page-turner." -Los Angeles Daily News "A lively, biting novel about the heavy burdens of racial self-consciousness and the perils of an identity forged by the assumptions of others." -1843 Magazine Senna's latest novel, New People, occupies the uneasy space between horror and humor."
-Vineyard Gazette "One of the very most interesting social writers the 21st century has yet to produce...Senna explodes American conceptions of class and race in ways that will make readers completely uncomfortable." -Seattle Weekly

A great read, both compelling and thoughtful. The narrative has a page-turning urgency, as Maria tumbles toward a disaster of her own making." -Library Journal (starred) "Senna's fearless novel is equal parts beguiling and disturbing... [she] combines the clued-in status details you'd find in a New York magazine article with the narrative invention of big-league fiction.... Every detail and subplot...is resonant. A great book about race and a great book all around." -Kirkus Reviews (starred) "Remarkable. New People plays out like Greek tragedy and social comedy all at once, reminding you that the worst kind of hell is always the one we raise." -Marlon James, author of A Brief History of Seven Killings "New People sparkles with precision, and with antic and merciless hilarity. I was seduced into reading it in one sitting, but will be thinking about it for a long time to come. This book--utterly grave, and yet beautifully light-hearted--is a wonder.
-Rachel Kushner, author of The Flame Throwers I stayed up way later than planned to finish New People, Danzy Senna's riveting, take-no-prisoners, dystopic dream of a novel. More scorcher than satire, New People loads identity, race, despair, and desire into a blender then hits high. Get ready to stay up late, to be propelled, pricked, and haunted.
-Maggie Nelson, author of The Argonauts Danzy Senna detonates the bomb between respectability and desire. In hypnotizing prose, New People kicks you in the gut, then sings you a lullaby. Read this and be haunted. Senna is a master.
-Mat Johnson, author of Loving Day

Danzy Senna's first novel, the bestselling Caucasia, won the Stephen Crane Award for Best New Fiction and the American Library Association's Alex Award, was a finalist for the International IMPAC Dublin Literary Award, and has been translated into nearly a dozen languages. A recipient of the Whiting Writers Award, Senna is also the author of the novel Symptomatic, the memoir Where Did You Sleep Last Night?, and the story collection You Are Free. She lives in Los Angeles with her husband, the novelist Percival Everett, and their sons.
If the item details above aren’t accurate or complete, we want to know about it. Report incorrect product info.