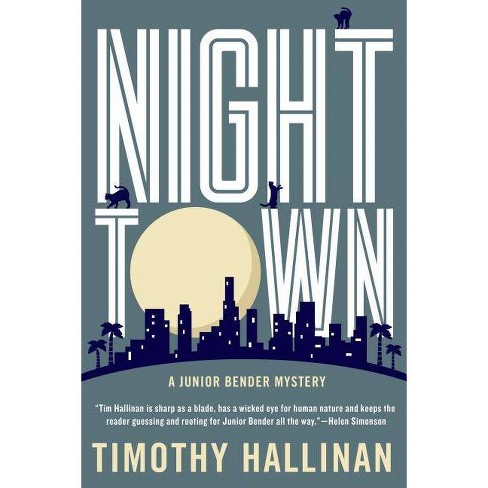 Finalist for the 2019 Nero Award
Finalist for the 2019 Lefty Award for Best Humorous Mystery Novel Praise for Nighttown "Exceedingly funny . . . this one's good for what ails you."
--Marilyn Stasio, New York Times "If you enjoy the ironic wit and criminal adventures of Lawrence Block's Bernie Rhodenbarr, then you'll want to read Timothy Hallinan's Nighttown. Junior Bender is one of my favorite fictional felons and Hallinan is a writer with the kind of heart and healthy cynicism that I admire."
--Carole E. Barrowman, the Milwaukee Journal-Sentinel "Hallinan's top-notch prose and plotting are reminiscent of Lawrence Block and Elmore Leonard."
--Publishers Weekly, Starred Review "Nothing puts a smile on my face or chuckle in my heart like a new Junior Bender book. Always fresh and ever insightful, Hallinan delivers pleasure reading in its purest form."
--Tim Tigner, author of Pushing Brilliance "Everybody's go-to burglar in LA, takes on another job that doesn't smell right--it fairly reeks of talcum powder--and lives to regret it early and often . . . Highly readable."
--Kirkus Reviews "[Nighttown] packs an unexpected wallop, which resonates long after the last (and highly satisfying) sentence is read."
--Bookreporter.com "A not-to-miss mystery . . . Hallinan is easily one of the most entertaining crime writers in the business today."
--New York Journal of Books "Are you a fan of Donald Westlake's caper books, or the first series from Bethany Maines with its side-splitting moments among makeup experts who ride on the wild side? Here's what you've been waiting for: exquisitely plotted action and twists, with conversation and commentary so dryly funny that those pee-proof panties advertised on TV should be sold with the book in some regions."
--Kingdom Books "Tightly plotted and fast-paced . . . Nighttown is the real deal."
--Kittling Books "This novel was extremely intriguing, suspenseful, and mysterious. It is highly recommended reading."
--The Gumshoe Review "Humor is a hallmark of the Junior Bender series, and this latest title is no exception."
--Bookgasm

Praise for Fields Where They Lay

"Burglar Junior Bender may just be our favorite literary PI."
--Entertainment Weekly "West Coast fun for the noir at heart."
--Sunday Times "Slick sleuthing, a touching romance and several good laughs."
--Toronto Star "Comparisons to Raymond Chandler and Donald Westlake are totally deserved and should give you a clue as to whether you'll like this book as much as I did."
--Raleigh News & Observer

"Hallinan deserves to win an Edgar for his ingeniously plotted, often hilarious sixth Junior Bender novel."
--Publishers Weekly, Starred Review "Nobody does comic mystery with an edge better than Hallinan."
--Booklist, Starred Review
If the item details above aren’t accurate or complete, we want to know about it. Report incorrect product info.