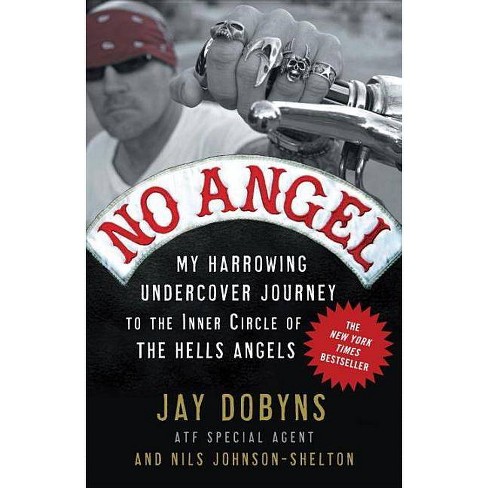 From Dobyns, the first federal agent to infiltrate the inner circle of the outlaw Hells Angels Motorcycle Club, comes the inside story of the 21-month operation that almost cost him his family, his sanity, and his life.

From the first federal agent to infiltrate the inner circle of the outlaw Hells Angels Motorcycle Club comes the inside story of the 21-month operation that almost cost him his family, his sanity, and his life. Getting shot in the chest as a rookie agent, bartering for machine guns, throttling down the highway at 100 mph, and responding to a full-scale, bloody riot between the Hells Angels and their rivals, the Mongols--these are just a few of the high-adrenaline experiences Dobyns recounts in this action-packed, hard-to-imagine-but-true story. Dobyns leaves no stone of his harrowing journey unturned. At runs and clubhouses, between rides and riots, Dobyns befriends bad-ass bikers, meth-fueled "old ladies," gun fetishists, psycho-killer ex-cons, and even some of the "Filthy Few"--the elite of the Hells Angels who've committed extreme violence on behalf of their club. Eventually, at parties staged behind heavily armed security, he meets legendary club members such as Chuck Zito, Johnny Angel, and the godfather of all bikers, Ralph "Sonny" Barger. To blend in with them, he gets full-arm ink; to win their respect, he vows to prove himself a stone-cold killer. Hardest of all is leading a double life, which has him torn between his devotion to his wife and children, and his pledge to become the first federal agent ever to be "fully patched" into the Angels' near-impregnable ranks. His act is so convincing that he comes within a hairsbreadth of losing himself. Eventually, he realizes that just as he's been infiltrating the Hells Angels, they' ve been infiltrating him. And just as they're not all bad, he's not all good. Reminiscent of Donnie Brasco's uncovering of the true Mafia, this is an eye-opening portrait of the world of bikers--the most in-depth since Hunter Thompson's seminal work--one that fully describes the seductive lure criminal camaraderie has for men who would otherwise be powerless outsiders. Here is all the nihilism, hate, and intimidation, but also the freedom--and, yes, brotherhood--of the only truly American form of organized crime.

Compulsively page-turning. The true story of Jay Dobyns, all-American dad and undercover cop running and gunning with the most dangerous outlaws in the USA. A high-velocity trip into a frightening American underworld told in rapid-fire, hard-boiled prose.
--Evan Wright, author of the national bestseller Generation Kill "No Angel pushes narrative nonfiction to new limits...If you wondered whether the bravura writing of Truman Capote and Hunter S. Thompson has a legacy, look no further. Dobyns leads us into the wacky, white world of the Hell's Angels, and with empathy and precision forces us to admit that bikers are all-too human."
--Sudhir Venkatesh, author of Gang Leader for a Day: A Rogue Sociologist Takes to the Streets "Jay Dobyns is a hero. Out of a sense of duty, he closed his eyes and made a journey into Hell. For two years he walked through the valley of the shadow of death, but thankfully, he lived to tell this riveting story. Highly recommended!"
--William "Billy" Queen, Special Agent ATF, Ret. and New York Times bestselling author of Under and Alone "A wild ride to the dark side. Jay Dobyns roars through the gritty underworld of organized crime that you never see in TV cop shows or read in the newspaper. He reveals the true, violent face of outlaw bikers--but also the tortured souls of the undercover cops who dare to infiltrate them."
--Julian Sher, co-author Angels of Death: Inside the Bikers' Global Crime Empire No Angel is an absolutely amazing account of one man's willingness to go above and beyond. Jay Dobyns, his team and those like them live life on the edge in an environment most can only imagine. This book provides a rare opportunity to share in the intensity, feel the adrenaline rush, smell the fear, and admire true courage and dedication."
--Michael Durant, author of the New York Times bestseller In the Company of Heroes "Unprecedented and unputdownable...Most people reading this book would assume that it must be a novel since no human being could possibly be involved in so much action. However, this is the true story of a very special covert ATF agent who over decades immersed himself in the most violent and criminal culture known to law enforcement. Even as a former US Army Special Forces Operator and Police SWAT team leader, I found myself in awe of his death-defying exploits."
--Dr. Richard Carmona, 17th Surgeon General of the United States "Ask yourself this question: would you put your life on the line for a cause? Jay Dobyns did. This book lets you experience some of the most dangerous activities of the best known biker gang in the world. Jay Dobyns brought honor to the ATF and is a true American hero."
--T.J. Leyden, author of Skinhead Confessions

JAY DOBYNS is a highly decorated agent who worked for the Bureau of Alcohol, Tobacco, and Firearms (ATF) for more than twenty years. For his work on Operation Black Biscuit, he was awarded the ATF Distinguished Service Medal and also a prestigious Top Cops award from the National Association of Police Officers. Find him online at JayDobyns.com. NILS JOHNSON-SHELTON, unlike Jay Dobyns, has never been a cop and can't even ride a motorcycle. This is his first book.
If the item details above aren’t accurate or complete, we want to know about it. Report incorrect product info.