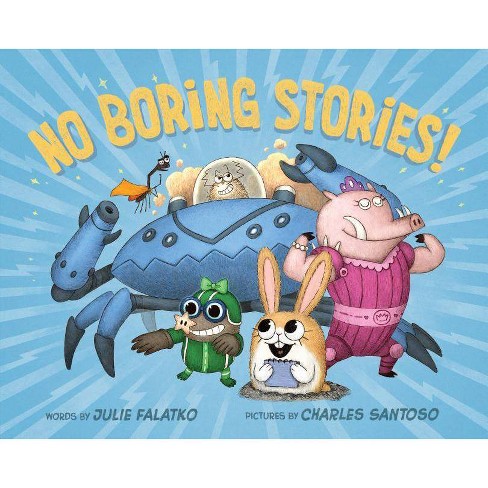 $12.79
MSRP$17.99
0 out of 5 stars with 0 reviews
be the first!be the first! ratings
Shipping
Free standard shipping with RedCard
Help us improve this page

Julie Falatko loves to talk about books. She has a library science degree, is a frequent contributor to the Nerdy Book Club, was a picture book reviewer, and started a Little Free Library in front of her house to share books with neighbors. She is the author of two Snappsy the Alligator titles, as well as the forthcoming The Great Outdoors and the Two Dogs in a Trenchcoat series. Charles Santoso loves drawing little things in his little journal and dreaming about funny, wondrous stories. He has illustrated several picture books, including The Snurtch and I Don't Like Koala (both written by Sean Ferrell); Ida, Always (written by Caron Levis); and Peanut Butter & Brains (written by Joe McGee). Before children's books, Charles worked in animation. His illustrations have been exhibited in Sydney, Australia, and also internationally in North America and France. He currently lives and works in Sydney. Visit him at charlessantoso.com and follow him on Twitter @minitreehouse.
If the item details above aren’t accurate or complete, we want to know about it. Report incorrect product info.