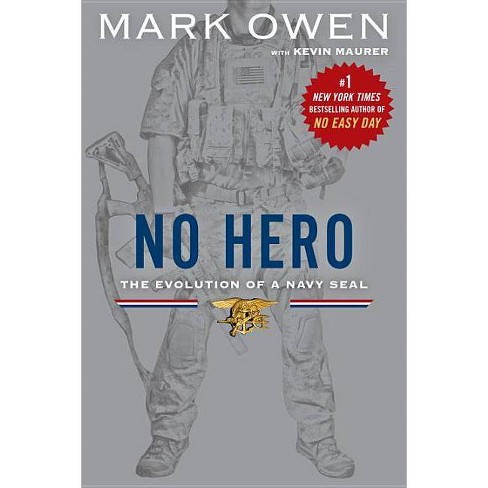 $7.69
MSRP$16.00
no reviews yet
be the first!be the first! ratings
Shipping
Free standard shipping with RedCard
Help us improve this page

"Owen emphasizes the selflessness and service of his fellow SEALs, along with the lessons he learned, in a book that is sure to appeal to the many fans of in-the-trenches special forces memoirs."--Publishers Weekly "Simple, well-told stories that will interest general readers and certainly anyone contemplating a career in special operations."--Kirkus Reviews "Owen's writing is genuine and insightful....No Hero may have been intended for the next generation of SEALs, but the book's lessons can also be useful to civilians."--Associated Press Praise for No Easy Day "This harrowing, minute-by-minute account by one of the highly trained members of Navy SEAL Team Six is narrative nonfiction at its most gripping....No Easy Day puts you right there for every tense moment."--Entertainment Weekly

"Gripping....There is no better illustration in No Easy Day that SEALs are ruthless pragmatists. They think fast. They adapt to whatever faces them. They do what they have to do."--The New York Times "[Mark Owen] has given us a brave retelling of one of the most important events in U.S. military history."--People "Make no mistake: No Easy Day is an important historic document."--Los Angeles Times

"A remarkably intimate glimpse into what motivates men striving to join an elite fighting force like the SEALS--and what keeps them there."--Associated Press
If the item details above aren’t accurate or complete, we want to know about it. Report incorrect product info.