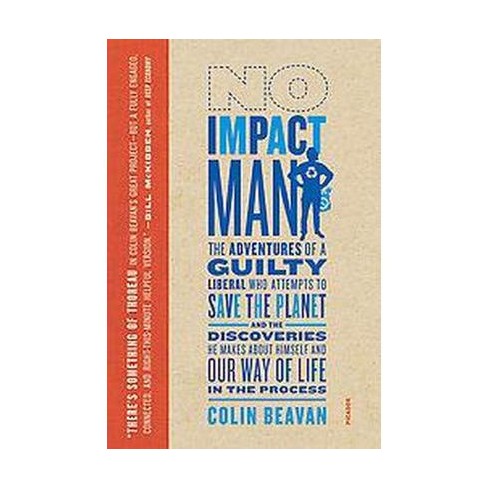 A guilty liberal finally snaps, swears off plastic, goes organic, becomes a bicycle nut, turns off his power, and generally becomes a tree-hugging lunatic who tries to save the polar bears and the rest of the planet from environmental catastrophe.

What does it really take to live eco-effectively? For one year, Colin Beavan swore off plastic and toxins, turned off his electricity, went organic, became a bicycle nut, and tried to save the planet from environmental catastrophe while dragging his young daughter and his Prada-wearing wife along for the ride. Together they attempted to make zero impact on the environment while living right in the heart of Manhattan, and this is the sensational, funny, and consciousness-raising story of how they did it. With No Impact Man, Beavan found that no-impact living is worthwhile--and richer, fuller, and more satisfying in the bargain.

"The No Impact Experiment changed Colin Beavan and reading No Impact Man will change you." --Annie Leonard, creator of The Story of Stuff

"Far from being a movement of self-denial and stern lectures about having too much fun, the 'no impact' mind-set is actually about increasing fulfillment and happiness by asking us to think about what makes us truly happy and what's really important in our lives." --Arianna Huffington "No Impact Man is a deeply honest and riveting account of the year in which Colin Beavan and his wife attempted to do what most of us would consider impossible. What might seem inconvenient to the point of absurdity instead teaches lessons that all of us need to learn. We as individuals can take action to address important social problems. One person can make a difference." --Marion Nestle, author of What to Eat "Profound . . . Beavan's project has significant emotional and ecological heft. No Impact Man works, most of all, because Beavan is intelligent, funny, provocative, and, above all, honest." --The Philadelphia Inquirer "There's something inspiring about a smart, committed person coming to an elegantly simple conclusion." --Los Angeles Times "You have to give Colin Beavan credit; the man put his money where his mouth is. A self-proclaimed 'guilty liberal' tired of the world's general ecological decline, he decided to change his life. And in no small way. Even better, he did it with a sense of humor." --The Boston Globe "There's something of Thoreau in Colin Beavan's great project--but a fully engaged, connected, and right-this-minute helpful version. It's a moment when we need to have as little impact in our own lives as possible--and as much impact in our political lives as we can possibly muster. Beavan shows how!" --Bill McKibben, author of Deep Economy "From their first baby steps (no takeout) to their giant leap (no toilet paper), the Beavans' experiment in ecological responsibility was a daunting escapade in going green . . . So fervent as to make Al Gore look like a profligate wastrel, Beavan's commitment to the cause is, nonetheless, infectiously inspiring and uproariously entertaining." --Booklist "With thorough research, Beavan updates his blog (noimpactman.com) with convincing statistical evidence, while discovering new ways to reduce consumption and his family's environmental footprint . . . An inspiring, persuasive argument that individuals are not helpless in the battle against environmental degradation and global warming." --Kirkus Reviews "Beavan captures his own shortcomings with candor and wit and offers surprising revelations . . . [Readers] will mull over his thought-provoking reflections and hopefully reconsider their own lifestyles." --Publishers Weekly "Colin Beavan has the disarming and uniquely remedial ability to make you laugh while he's making you feel like a swine, and what's more, to make you not only want to, but to actually do something, about it. --Norah Vincent, author of Voluntary MadnessNo Impact Man is a subversive book--not because it preaches a radical environmental agenda, but because it gives the secret to personal rebellion against the bitterness of a man's own compromises." --Arthur Brooks, author of Gross National Happiness

Colin Beavan is the author of No Impact Man as well as two previous books that have absolutely nothing to do with the environment: Fingerprints: The Murder Case That Launched Forensic Science and Operation Jedburgh: D-Day and America's First Shadow War. His writing has appeared in Esquire, The Atlantic, and the New York Times, and he posts regularly at No Impact Man. He lives in New York City.
If the item details above aren’t accurate or complete, we want to know about it. Report incorrect product info.