Not a Bean - by Claudia Guadalupe Martinez (Hardcover) 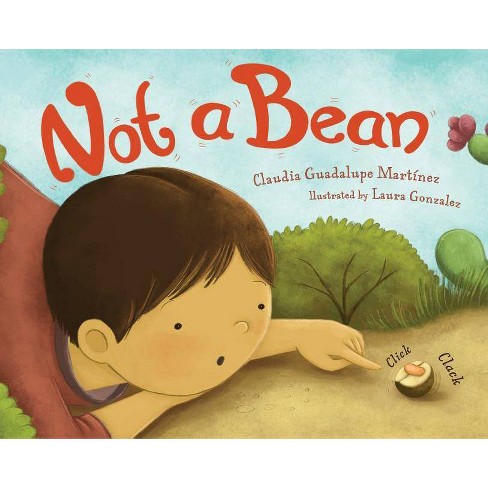 "With Spanish vocabulary and a clever counting concept, this poetic story shares the life cycle of a Mexican jumping bean. This curious jumping insect is actually a seedpod from a shrub called yerba de la flecha, into which a caterpillar burrows, living inside the pod until it builds a cocoon and breaks out as a moth. Perfect for preschoolers and prereaders, this creative picture book explores the Mexican jumping bean's daily life and eventual transformation and escape from the pod"--

A Mexican jumping bean isn't a bean at all. It's a fascinating home and food source for a special kind of caterpillar! With Spanish vocabulary and a clever counting concept, this poetic story shares the life cycle of a Mexican jumping bean. This curious jumping insect is actually a seedpod from a shrub called yerba de la flecha, into which a caterpillar burrows, living inside the pod until it builds a cocoon and breaks out as a moth. Perfect for preschoolers and prereaders, this creative picture book explores the Mexican jumping bean's daily life and eventual transformation and escape from the pod.

♦ Martínez reveals the hidden secrets of the legendary Mexican jumping beans in her picture-book debut. As the title asserts, the jumping bean is not a bean but the seed pod of a desert plant known as the yerba de la flecha, which hides a secret stowaway. A female moth has laid her eggs near the seed pods of the yerba plant, and when they hatch, the caterpillars crawl inside, using the seed pod for protection and sustenance before pupating and emerging as adult moths. As a seed-encased caterpillar jumps around the desert floor seeking shelter and safety, readers count along in Spanish while learning vocabulary related to the desert ecosystem: cascabeles (rattlesnakes) and arroyos (streams), for example. González's bright, friendly illustrations depict a vibrant desert teeming with life--far from the desolation often associated with its dry climate. Siete amigos also join the proceedings, depicted in varying shades of tan and peach, appearing to represent some of the diversity in skin tone among Mesoamerican peoples. Much like the seed pods' concealed cargo, this informational picture book packs plenty of facts and learning moments into a thoroughly entertaining package. Engaging and fun, as all learning should be.
--Kirkus Reviews, starred review ♦ In the desert of Mexico, something special is happening inside of a yerba de la flecha plant. A caterpillar larva burrows its way into the seedpod of the shrub, where it grows by drinking the water that seeps into it. When the seedpod falls to the ground, the caterpillar is tucked inside, jumping when necessary to escape the heat of the desert or get to safety. A group of children come upon the "jumping bean" and add it to their game, hoping it will "jump" to a specific spot as they observe it. Soon, though, the bean goes still to become something entirely new. This impeccably designed book tells the story of the Mexican jumping bean. Though not a bean at all, this plant has nonetheless made a memorable name for itself through its unusual nature. Thoughtful, detailed illustrations transport readers through the Mexican desert as the caterpillar completes its journey. The text introduces Spanish words while counting from one to 10 throughout the story. VERDICT This is an excellent read-aloud for elementary school children, especially those who are looking for a gentle introduction to the Spanish language and some accompanying cultural connections. Fans of Roseanne Greenfield Thong's Green Is a Chili Pepper will appreciate the design similarities.
--School Library Journal, starred review ♦ "Jumping beans" are not in fact beans but moth larvae that have burrowed into the seedpods of the yerba de la flecha shrubs found alongside arroyos in the northern desert mountains of Mexico. In this accessible life-cycle/counting book that organically interweaves Spanish and English, Martínez traces the metamorphosis of "una oruga -- a wiggly caterpillar" as it embarks on a pupation journey, that, with the aid of many desert helpers, ends with transformation and a spreading of wings as "a majestic polilla...soars into the sky." Martínez takes readers inside the seedpod, spotlighting its daily interactions -- from the sun that warms it; to cacti ("dos saguaros") that provide shade; to the predators ("cuatro coyotes," "cinco cuervos") its clicking and clacking scares away; to children ("siete amigos") who come upon it while exploring the desert and use it to play a game. González's digital illustrations harmonize subdued desert hues, mixing greens, russets, and blues. Capacious double-page spreads capture intricate goings-on inside the seedpod while simultaneously conveying wide-open desert expanses. Martínez (from El Paso) attends to the complexity of this desert landscape--a region politically and environmentally fraught--by tenderly centering its beautifully complex life in an engagingly child-friendly way. An appended author's note provides additional information about jumping bean moths; a glossary and bilingual "Count to Ten" list are also included. --The Horn Book, starred review After burrowing its way into a desert shrub's seedpod, a caterpillar lives there even after the pod hardens and falls to the ground. Still inside, the caterpillar rolls its home, referred to here as "Not a Bean," into the shade and occasionally makes it jump. "Siete amigos" find the Not a Bean. They draw a circle of "ocho óvalos" (eight ovals) on the ground and play a game with the jumping beans but leave them in the desert. Later, the caterpillar spins its cocoon inside the pod. Time passes until, one day, it emerges as a moth and flies away. An author's note discusses the jumping bean moth, its life cycle, and its unique relationship with the Mexican plant producing the pods it needs. Illustrated with attractive digital art, the book demonstrates how a particular caterpillar becomes a moth, offers practice in Spanish numbers, and incorporates Spanish words (translated in the appended glossary) within an English text. While this picture book has a lot going on, it also has a lot to offer.
--Booklist

Claudia Guadalupe Martínez learned that letters form words from reading subtitles of old westerns with her father. Her debut novel, The Smell of Old Lady Perfume, received the 2009 Paterson Prize for Books for Young People, the 2008 Texas Institute of Letters Best Young Adult Book Award, and a 2009 Americas Award Commendation. Pig Park won the 2015 Texas Institute of Letters Best Young Adult Book and the 2015 NACCS Tejas Foco Young Adult Fiction Award. Not a Bean is her first picture book. Laura Gonzalez has a degree in graphic design from Universidad Autónoma de Nuevo León in Mexico, where she also studied illustration. She is a member of the Mexican Association of Illustrators (AMDI) and has illustrated several books for children. www.laugonzalez.com
If the item details above aren’t accurate or complete, we want to know about it.

God's Wisdom for a Mother's Heart - by Bobbie Wolgemuth (Paperback)

Our Lady of Guadalupe - by Natalie Muglia & Sam Estrada (Hardcover)

Jesus in Red - by A Living Waters Film (Leather Bound)