Notes on a Banana - by David Leite (Paperback) 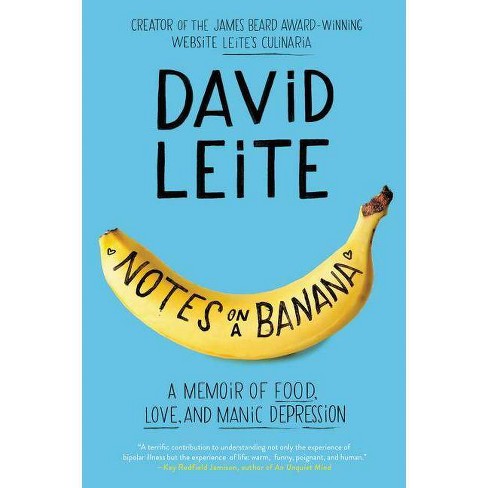 $12.99
MSRP$16.99
no reviews yet
be the first!be the first! ratings
Shipping
Free standard shipping with RedCard
Loading, please wait...
Help us improve this page

A FINALIST FOR THE NEW ENGLAND BOOK AWARD FOR NON FICTION

A PASTE BEST BOOK OF THE YEAR

ONE OF TIMEOUT NEW YORK'S BEST SUMMER BEACH READS OF 2017

The stunning and long-awaited memoir from the beloved founder of the James Beard Award-winning website Leite's Culinaria--a candid, courageous, and at times laugh-out-loud funny story of family, food, mental illness, and sexual identity.

Born into a family of Azorean immigrants, David Leite grew up in the 1960s in a devoutly Catholic, blue-collar, food-crazed Portuguese home in Fall River, Massachusetts. A clever and determined dreamer with a vivid imagination and a flair for the dramatic, "Banana" as his mother endearingly called him, yearned to live in a middle-class house with a swinging kitchen door just like the ones on television, and fell in love with everything French, thanks to his Portuguese and French-Canadian godmother. But David also struggled with the emotional devastation of manic depression. Until he was diagnosed in his mid-thirties, David found relief from his wild mood swings in learning about food, watching Julia Child, and cooking for others.

Notes on a Banana is his heartfelt, unflinchingly honest, yet tender memoir of growing up, accepting himself, and turning his love of food into an award-winning career. Reminiscing about the people and events that shaped him, David looks back at the highs and lows of his life: from his rejection of being gay and his attempt to "turn straight" through Aesthetic Realism, a cult in downtown Manhattan, to becoming a writer, cookbook author, and web publisher, to his twenty-four-year relationship with Alan, known to millions of David's readers as "The One," which began with (what else?) food. Throughout the journey, David returns to his stoves and tables, and those of his family, as a way of grounding himself.

A blend of Kay Redfield Jamison's An Unquiet Mind, the food memoirs by Ruth Reichl, Anthony Bourdain, and Gabrielle Hamilton, and the character-rich storytelling of Augusten Burroughs, David Sedaris, and Jenny Lawson, Notes on a Banana is a feast that dazzles, delights, and, ultimately, heals.