Once There Were Giants - by Jerry Izenberg (Hardcover) 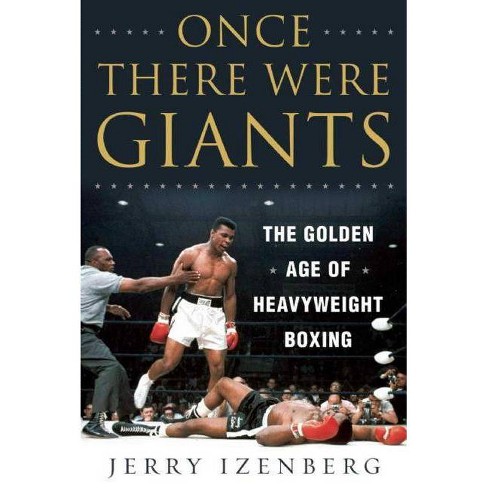 "I was there. So was Jerry Izenberg. This is the way it was."
--Larry Holmes, former heavyweight champion "I have yet to find someone with as much knowledge of boxing as Jerry Izenberg."
--Joe Cortez, referee and International Boxing Hall of Famer "An extraordinary, historically accurate chronicle of the golden era of heavyweight boxing in the U.S. . . . one of those gems you can't put down once you start reading."
--USA Today "Once There Were Giants is a history lesson that dances the way Ali did and packs the wallop of Frazier's left hook. Only Jerry Izenberg, with sixty-plus years of no-BS reporting and bristling prose behind him, could have brought back to life the greatest era boxing's heavyweights ever saw. He knew the fighters from Liston and Foreman to Holmes and Tyson, and he had a pipeline to the mob guys, corner men, TV executives, and flimflamming promoters. There isn't another sports writer in America who's been at ringside so long or tells the stories he found there so memorably."
--John Schulian, editor (with George Kimball), At the Fights: American Writers on Boxing "Jerry Izenberg has written the most accurate and entertaining boxing book I have ever read.
--Freddie Roach, seven-time Boxing Writers Association of America Trainer of the Year "The way it was from the most prolific boxing writer I know."
--Marc Ratner, former executive director of the Nevada State Athletic Commission "The facts are a revelation. . . . the emotions of the characters involved were a great insight."
--Bill Parcells, former head coach of the New York Giants, New England Patriots, New York Jets, and Dallas Cowboys "Izenberg knows more about boxing than almost everybody has forgotten about everything else. It's that magical memory, along with his perspective, that makes this more than a sociological treatise. . . . [Izenberg's] jabs are precise and intentional and his right crosses are thunderous. In Once There Were Giants, Izenberg floats like a butterfly, and stings like a bee."
--NJ.com / The Star-Ledger "Most useful as an introduction to the era between 1962 and 1997 for the uninitiated, or a trip down memory lane for hard-core fans."
--Library Journal "A vivid tribute to the heavyweight division, from Floyd Patterson's time through Mike Tyson's. . . . a requiem for the days when everybody knew the name of the champ."
--LA Daily News "Izenberg argues [that this was the most competitive period in the history of boxing among the big men], and he is standing on solid ground when he says so. . . . In a lively narrative, [Izenberg] brings us to ringside and into the backrooms to visit with the fighters to relive many great moments. "
--Boston Post Gazette "A masterful tome from a master of his craft, the book takes the reader past the headlines and wins and losses and reveals a time in the sport (and history) that will never be seen again. . . . If anyone is a nine-inning writer, it's Jerry Izenberg."
--BoxingScene.com "Jerry Izenberg's latest treatise on the fight game . . . contains as many subtle hints of venerated guitar pickers Hank Williams and Woody Guthrie as of iconic sports writers A J Liebling and Paul Gallico. Then again, no comparison of Izenberg to anyone else is valid . . . [he is] an original, a master wordsmith and observer of the human condition who can take familiar source material and wring from it small gems of fresh insight."
--The Sweet Science
If the item details above aren’t accurate or complete, we want to know about it. Report incorrect product info.