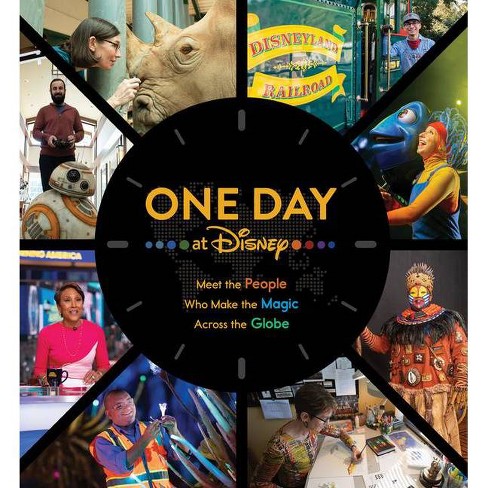 On a Thursday in 2019, photographers and videographers in locations across the globe captured what goes on in the Disney empire. All the photos in the book were taken on that one day, beginning early in Tokyo and following the sun around the world through Shanghai, Hong Kong, Paris, Madrid, the Bahamas, Costa Rica, and dozens of places throughout the United States, ending in Hawaii. The photographs and text in this large volume cover actors, anchors, designers, hosts, artists, theme park employees, executives and more.

Discover what it's like to report to work every day for The Walt Disney Company. Step behind the scenes to immerse yourself in one ordinary day at Disney. In addition to the book, the Disney+ team was on hand to capture stories. A documentary and 52 short-form episodes expand the profiles and delve deeper into the essence of what it's like to be a Disney cast member. On a Thursday in 2019, a small army of photographers and videographers scattered across the globe to capture what goes on beyond those tantalizing Cast Members Only doors - whether eavesdropping on historic endeavors or typical tasks. All the photos in this book were taken on that single Thursday, beginning early in Tokyo and following the sun around the world through Shanghai, Hong Kong, Paris, Madrid, the Bahamas, Costa Rica, and dozens of places throughout the United States. More than 40 hours after it began, the day ended as the sun set on the Aulani resort in Hawaii. On that day, some 80 Cast Members agreed to open up their workshops, dressing rooms, kitchens, cubicles, TV studios, labs, locomotive engines - and some even more surprising and diverse work spaces. They also shared their stories: childhood dreams and chapters, career pivots and triumphs, workaday hurdles and joys. It was just a day in the life, as extraordinary as any other day at Disney. As any Cast Member can tell you, a Disney job is less a destination than a limitless journey. And for just One Day at Disney, we can all tag along for the ride. Searching for that perfect gift for the Disney theme park fan in your life? Explore more archival-quality books from Disney Editions:

One of 10 Books to read this month . . . A poignant, inspiring look into working for the Mouse.--PATCH

One of 20 Books Every True Disney Fan Should Have in Their Collection.--POPSUGAR

Bruce C. Steele is a journalist and Disney fan with a long career of profiling the famous and the unheralded, from the pastry chefs at the Biltmore Estate to the stars of Disney's Mary Poppins Returns. A Pennsylvania native and University of Alabama graduate, he started his career at a daily newspaper in Louisiana and most recently worked at the paper in his current home of Asheville, North Carolina. In between he was the executive editor of Out magazine and the editor in chief of The Advocate newsmagazine and also took time to get an MFA in film studies from Columbia University. He has lived in New York City and Los Angeles, where his husband was a Disney animator. He's now a freelance writer and regular contributor to Disney's twenty-three magazine. Apart from this book, some of his favorite past interviews have been Emma Watson, Sir Ian McKellen, Episcopal Bishop Gene Robinson and crawfish farmers in the Louisiana bayou.