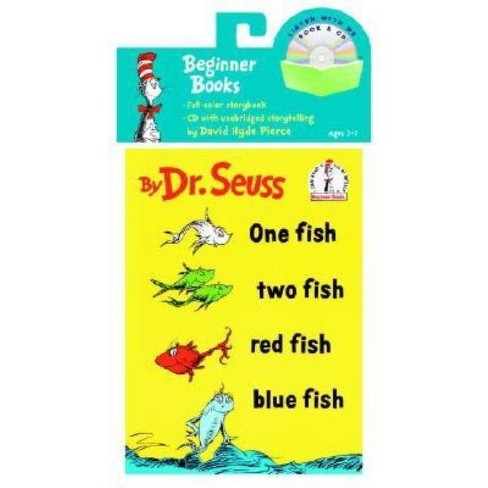 A crazy story in verse in which a series of unusually-named creatures (some of which are fish)--Nook, Womp, Yink, Yap, Gack and the Zeds--run into equally-zany situations.

Pulitzer Prize-winning Dr. Seuss's classic Beginner Book is now part of a book and audio CD package, with word-for-word storytelling by David Hyde Pierce. "From there to here, from here to there, funny things are everywhere." Beginning with just five fish and continuing into flights of fancy, One Fish Two Fish Red Fish Blue Fish celebrates how much fun imagination can be. From the can-opening Zans to the boxing Gox to the winking Yink who drinks pink ink, the silly rhymes and colorful cast of characters create an entertaining approach to reading that will have every child giggling from morning to night: "Today is gone. Today was fun. Tomorrow is another one." Originally created by Dr. Seuss, Beginner Books encourage children to read all by themselves, with simple words and illustrations that give clues to their meanings.

THEODOR SEUSS GEISEL--aka Dr. Seuss--is one of the most beloved children's book authors of all time. From The Cat in the Hat to Oh, the Places You'll Go!, his iconic characters, stories, and art style have been a lasting influence on generations of children and adults. The books he wrote and illustrated under the name Dr. Seuss (and others that he wrote but did not illustrate, including some under the pseudonyms Theo. LeSieg and Rosetta Stone) have been translated into thirty languages. Hundreds of millions of copies have found their way into homes and hearts around the world. Dr. Seuss's long list of awards includes Caldecott Honors for McElligot's Pool, If I Ran the Zoo, and Bartholomew and the Oobleck, the Pulitzer Prize, and eight honorary doctorates. Works based on his original stories have won three Oscars, three Emmys, three Grammys, and a Peabody.
If the item details above aren’t accurate or complete, we want to know about it. Report incorrect product info.