One for All - by Lillie Lainoff (Hardcover) 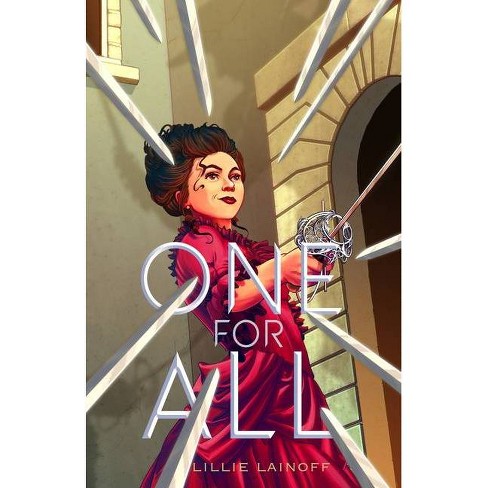 In 1655 sixteen-year-old Tania is the daughter of a retired musketeer, but she is afflicted with extreme vertigo and subject to frequent falls; when her father is murdered she finds that he has arranged for her to attend Madame de Treville's newly formed Acadâemie des Mariâees in Paris, which, it turns out, is less a school for would-be wives, than a fencing academy for girls--and so Tania begins her training to be a new kind of musketeer, and to get revenge for her father.

"There are no limits to the will--and the strength--of this unique female hero." --Tamora Pierce, writer of the Song of the Lioness and the Protector of the Small quartets

One for All is a gender-bent retelling of The Three Musketeers, in which a girl with a chronic illness trains as a Musketeer and uncovers secrets, sisterhood, and self-love.

Tania de Batz is most herself with a sword in her hand. Everyone thinks her near-constant dizziness makes her weak, nothing but "a sick girl." But Tania wants to be strong, independent, a fencer like her father--a former Musketeer and her greatest champion. Then Papa is brutally, mysteriously murdered. His dying wish? For Tania to attend finishing school. But L'Académie des Mariées, Tania realizes, is no finishing school. It's a secret training ground for new Musketeers: women who are socialites on the surface, but strap daggers under their skirts, seduce men into giving up dangerous secrets, and protect France from downfall. And they don't shy away from a sword fight. With her newfound sisters at her side, Tania feels that she has a purpose, that she belongs. But then she meets Étienne, her target in uncovering a potential assassination plot. He's kind, charming--and might have information about what really happened to her father. Torn between duty and dizzying emotion, Tania will have to decide where her loyalties lie...or risk losing everything she's ever wanted. Lillie Lainoff's debut novel is a fierce, whirlwind adventure about the depth of found family, the strength that goes beyond the body, and the determination it takes to fight for what you love. Includes an author's note about her personal experience with Postural Orthostatic Tachycardia Syndrome.

"A dashing tale full of heart, courage, and friendship, with an unforgettable disabled heroine. One for All is revolutionary in more ways than one." --Marieke Nijkamp, #1 New York Times-bestselling author of This is Where it Ends

"There are no limits to the will--and the strength--of this unique female hero." --Tamora Pierce, writer of the Song of the Lioness and the Protector of the Small quartets "A thrilling mystery from start to finish. Lainoff masterfully created a feminist retelling of the Three Musketeers with a strong, determined heroine. Chronically ill readers will delight in seeing themselves starring in their own adventure. Lainoff is a fierce new talent to watch out for." --Kerri Maniscalco, #1 New York Times-bestselling author of Kingdom of the Wicked "One For All is a reimagining that is both poignant and fiery--and like no other Musketeer story you have ever read. Just like the blade her teen protagonist Tania wields, Lainoff's prose is effortlessly precise, fluid, and sharp . . . a breathtaking adventure story set in the past that also speaks to our present and future--the best type of historical fiction. Tania's story is for anyone who has wondered how to carve a path through a world that does not accommodate your whole self." --Tracy Deonn, New York Times-bestselling author of Legendborn "A rousing tale of lady spies, swordplay, with a dash of romance. Tania is a formidable heroine, driven to carve out a place for herself among the musketeers. Lillie Lainoff has crafted a story as thrilling and compelling as any fencing match." --Emily Lloyd-Jones, author of The Bone Houses "The fierce, disabled heroine of One for All discovers her strengths and defies expectations in this swashbuckling tale of girls who have each other's backs. A delightful, empowering adventure!" --Joy McCullough, National Book Award-nominated author of Blood Water Paint "A captivating, stereotype-shattering, OwnVoices fantasy about defying the odds and finding your place in the world. A heartfelt, gender-bending read featuring a disabled heroine whose differences give her the strength and courage to fight for her dreams." -- Kami Garcia, #1 New York Times bestselling coauthor of Beautiful Creatures "A story brimming with strength. One for All will whirl you away to a 17th century France of pulse-pounding duels in beautiful ball gowns, following a sisterhood knitted together by duty and an indomitable heroine to cheer for." --Chloe Gong, New York Times-bestselling author of These Violent Delights "Fierce, breathtaking, and absolutely unputdownable. One for All is an adventure-packed historical retelling that you won't want to miss!" --June Hur, author of The Forest of Stolen Girls "A thrilling, big-hearted novel that is sure to become a classic in the canon of YA historical fiction, One for All is everything readers could want in a feminist adventure . . . A stunning debut that hits all the right notes." --Carly Heath, author of The Reckless Kind "Lainoff's female Musketeers beguile and swashbuckle their way into the ornate citadel of power that was Louis XIV's court with wit, tenacity, and stirring sisterhood. You will cheer for them to carry the day in this sweeping story about becoming your best self in the midst of a society trying to relegate you to a specific category." --Jennieke Cohen, author of Dangerous Alliance and My Fine Fellow

Lillie Lainoff received her B.A. in English from Yale University, where she was a varsity fencer and one of the first physically disabled athletes to individually qualify for any NCAA Championship event. She has also won the 2019 LA Review Literary Award for Short Fiction, was a featured Rooted in Rights disability activist, and is the founder of Disabled Kidlit Writers on Facebook. She is currently an MA candidate in Creative Writing Prose Fiction at the University of East Anglia, and lives in Washington, D.C. One for All is her first novel.
If the item details above aren’t accurate or complete, we want to know about it. Report incorrect product info.