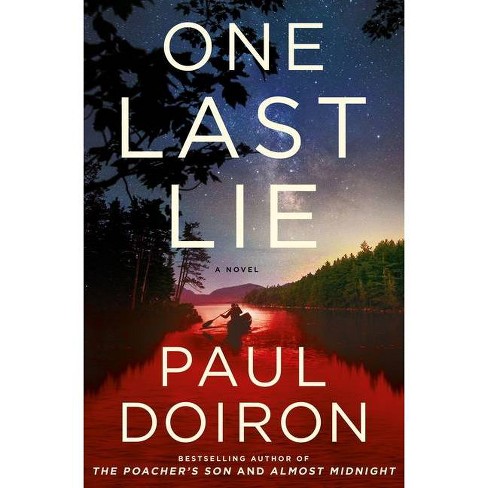 A sudden disappearance reveals a startling connection to a 15-year-old cold case in the new thriller from bestselling Edgar Award finalist Paul Doiron.

The disappearance of Mike Bowditch's beloved mentor reveals an ominous connection to a 15-year-old cold case in One Last Lie, the new thriller from bestselling Edgar Award finalist Paul Doiron.

"Never trust a man without secrets." These are the last words retired game warden Charley Stevens speaks to his surrogate son, Warden Investigator Mike Bowditch, before the old man vanishes without explanation. Mike suspects his friend's mysterious departure has to do with an antique warden badge that recently resurfaced at a flea market -- a badge connected to a cold case from Charley's past that the Maine Warden Service would rather forget. Fifteen years ago, a young warden was sent on an undercover mission to infiltrate a notorious poaching ring and never returned. He was presumed dead, but his body was never recovered. Mike is desperate to find Charley before he meets a similar fate. His investigation brings him to the miles of forest and riverside towns along the Canadian border--but he soon learns that even his fellow wardens have secrets to keep. And Charley's past isn't the only one coming to light; his daughter, Stacey, has resurfaced to search for her missing father, and Mike must grapple with the return of the woman he once thought was gone forever. Forced to question his faith in the man he sees as a father, Mike must reopen a cold case that powerful people--one of whom may be a killer--will do anything to keep closed.

Praise for One Last Lie:

"Edgar finalist Doiron artfully blends a whodunit plot with superior characterizations in his top-notch 11th mystery...vividly portrays the Maine woods setting while maintaining taut suspense." --Publishers Weekly (starred) This novel is something of a departure for Doiron... the suspenseful, fast-paced plot has more twists and turns than usual. --Associated Press Before you read this book, clear your schedule. It's the kind of story best read in one gulp...[Doiron] keeps getting better. --New York Journal of Books "One Last Lie is a triumph for aficionados and newcomers alike. The secrets, old and new, are compelling, and Doiron's landscape imagery is perfectly balanced (as is the literary history)...Trust, friendship, love, faith and how the family we choose holds powerful sway is at the heart of this impressive series entry." --Shelf Awareness "Doiron's masterful plotting pulls it all together, and the reader gets to meet an odd assortment of extraordinarily well-defined characters--good guys and bad--while learning more about both the natural and the political history of the Pine Tree State." --Booklist Praise for Paul Doiron and the Mike Bowditch mysteries:

"Doiron captures the stark beauty of his setting." --New York Times Book Review for Stay Hidden The characters are well drawn, the Maine landscape is vividly portrayed, and Bowditch pursues his passion to protect the innocent and bring evil doers to justice regardless of personal cost. --Associated Press for Almost Midnight Doiron...[ramps] up the tension slowly until the story reaches can't-put-it-down velocity. --Library Journal for Almost Midnight "Breathless pacing, dark humor, wildlife, and vivid characters." --Boston Globe for Widowmaker

"As always with a Doiron novel, the characters are so well-drawn you can almost reach out and shake their hands, and the rural landscape is so vividly portrayed that the reader can smell wildflowers, marvel at the swarms of fireflies and feel the sting of the blood-thirsty insects. But the author's finest achievement is the evolution of Mike Bowditch himself." --Bruce DeSilva, Associated Press for Knife Creek "Outstanding...Doiron balances nuanced characterizations and intelligent plotting perfectly." --Publishers Weekly (starred review) for Stay Hidden The extraordinary sense of place makes this Doiron's strongest novel yet. --Booklist (starred review) for Stay Hidden
If the item details above aren’t accurate or complete, we want to know about it. Report incorrect product info.