One Man Against the World - by Tim Weiner (Paperback) 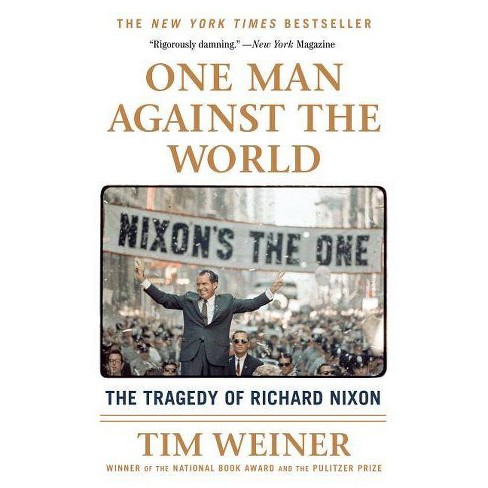 $9.99
MSRP$17.99
undefined out of 5 stars with 0 reviews
be the first!be the first! ratings
Help us improve this page

A shocking and riveting look at one of the most dramatic and disastrous presidencies in US history, from Pulitzer Prize and National Book Award winner Tim Weiner.

Based largely on documents declassified only in the last few years, One Man Against the World paints a devastating portrait of a tortured yet brilliant man who led the country largely according to a deep-seated insecurity and distrust of not only his cabinet and congress, but the American population at large. In riveting, tick-tock prose, Weiner illuminates how the Vietnam War and the Watergate controversy that brought about Nixon's demise were inextricably linked. From the hail of garbage and curses that awaited Nixon upon his arrival at the White House, when he became the president of a nation as deeply divided as it had been since the end of the Civil War, to the unprecedented action Nixon took against American citizens, who he considered as traitorous as the army of North Vietnam, to the infamous break-in and the tapes that bear remarkable record of the most intimate and damning conversations between the president and his confidantes, Weiner narrates the history of Nixon's anguished presidency in fascinating and fresh detail.

A crucial new look at the greatest political suicide in history, One Man Against the World leaves us not only with new insight into this tumultuous period, but also into the motivations and demons of an American president who saw enemies everywhere, and, thinking the world was against him, undermined the foundations of the country he had hoped to lead.

"[An] eye-opening study of Richard Nixon's booze-soaked, paranoid White House years and the endless tragedies they wrought....It speaks volumes about Nixon that there is still more to learn about him, 40-plus years after Watergate. It speaks further volumes that what we are learning is even worse than what we knew." --The Kirkus Review (Starred Review)

"[A] devastating account of Nixon's presidency... This is powerful raw material, but Weiner's brilliant turns of phrase transform it into something extraordinary." --Publishers Weekly (Starred Review)

"Weiner writes so well that his book is not only authoritative but a riveting read." --BookPage

"Thorough, devastating, and brilliantly convincing, perhaps the best profile of that complex man and his era we have had.... Those seeking to understand America in the second half of the twentieth century and, distressingly, beyond would do well to begin here. The tragedy was not Nixon's alone, but his role in it has never been portrayed more vividly." --Booklist (Starred Review)

"Weiner's judgments are harsh but meticulously researched. With earlier books on the CIA and FBI and reporting on secret government programs, the veteran New York Times reporter has the experience to analyze reams of primary-source records." --Miami Herald

"The most compelling and comprehensive indictment of Richard Nixon to date, fleshing out in merciless detail the self-deceptions, lies and crimes of the 37th president." --The Dallas Morning News

"Weiner's Nixon emerges as a man who sought peace but who never was at peace, a president who tried to create order but who sowed disorder, a political figure who spoke of the public trust but who won the distrust of the public." --Boston Globe

"A history of Nixon's paranoid White House that draws connections between his handling of the Vietnam War and the illegal domestic spying that brought down his presidency... an eye-opener." --Chicago Tribune

"One Man Against the World is studded with gems. But perhaps its best part is the accounting of what Nixon has wrought in this country." --Pittsburgh Post-Gazette

Tim Weiner is the author of five books. Legacy of Ashes, his history of the CIA, won the National Book Award. His journalism on secret government programs received the Pulitzer Prize for national reporting. As a correspondent for The New York Times, he covered war and terrorism in Afghanistan, Pakistan, the Sudan, and other nations. He directs the Carey Institute's nonfiction residency program in upstate New York and teaches as an Anschutz Distinguished Fellow in American Studies at Princeton.
If the item details above aren’t accurate or complete, we want to know about it. Report incorrect product info.