One Nation Under Drones - by John E Jackson (Hardcover) 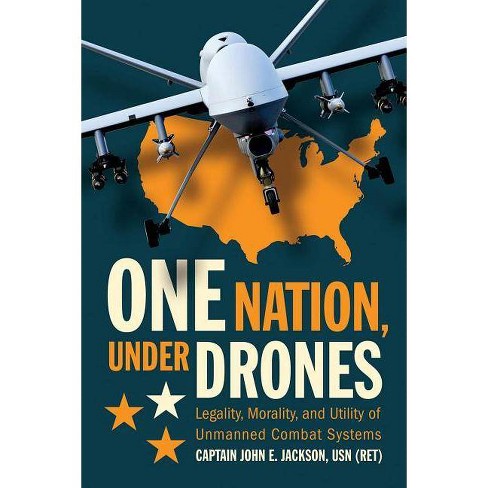 One Nation Under Drones is an interesting and informative review of how robotic and unmanned systems are impacting every aspect of American life, from how we fight our wars to how we play to how we grow our food. Edited by John Jackson, this highly readable book features chapters from a dozen experts, researchers, and operators of the sophisticated systems that have become ubiquitous across the nation and around the world. Press reports have focused primarily on unmanned aerial vehicles, officially designated as UAVs, but more often referred to as "drones."

This work takes you behind the scenes and describes how Predators, Reapers, Scan Eagles, and dozens of other pilotless aircraft have been used to fight the Global War on Terrorism. Although these systems seemed to emerge fully-developed into the skies above America's distant battlefields following the attacks of September 11, 2001, readers will discover that they actually trace their lineage to World War I, when the "automatic airplane/aerial torpedo," designed and built by the Sperry Gyroscope Company, made its first flight just over a century ago. Unmanned aircraft were used by various combatants in World War II and took many forms: from converted manned bombers to intercontinental attacks on the American homeland by rice-paper balloons. Technology developed in the latter decades of the 20th century enabled crews stationed thousands of miles away to attack targets on remote battlefields. Such long-range and remote-controlled weapons have been extensively used but are controversial from both legal and ethical standpoints.

Chapters written by international law specialists and drone pilots with advanced education in ethics address these issues from both sides of the argument. The book also details how robotic systems are being used on land, in and below the seas, and in civilian applications such as driverless cars. Three dozen photographs display drones as small as an insect up to those as large as a 737 airliner. One Nation Under Drones covers such a wide array of topics that it will be of interest to everyone from the casual reader seeking to know more about these systems to national security professionals, both in and out of uniform, who will be making decisions about their procurement and use in decades to come.