One Person, No Vote - by Carol Anderson 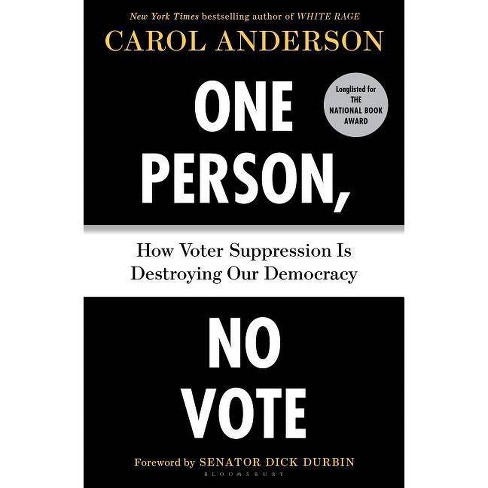 As featured in the documentary All In: The Fight for Democracy

From the award-winning, New York Times bestselling author of White Rage, the startling--and timely--history of voter suppression in America, with a foreword by Senator Dick Durbin.

As featured in the documentary All In: The Fight for Democracy

Finalist for the PEN/John Kenneth Galbraith Award for Nonfiction
Longlisted for the National Book Award in Nonfiction
Named one of the Best Books of the Year by:
Washington Post * Boston Globe * NPR* Bustle * BookRiot * New York Public Library From the award-winning, New York Times bestselling author of White Rage, the startling--and timely--history of voter suppression in America, with a foreword by Senator Dick Durbin. In her New York Times bestseller White Rage, Carol Anderson laid bare an insidious history of policies that have systematically impeded black progress in America, from 1865 to our combustible present. With One Person, No Vote, she chronicles a related history: the rollbacks to African American participation in the vote since the 2013 Supreme Court decision that eviscerated the Voting Rights Act of 1965. Known as the Shelby ruling, this decision effectively allowed districts with a demonstrated history of racial discrimination to change voting requirements without approval from the Department of Justice. Focusing on the aftermath of Shelby, Anderson follows the astonishing story of government-dictated racial discrimination unfolding before our very eyes as more and more states adopt voter suppression laws. In gripping, enlightening detail she explains how voter suppression works, from photo ID requirements to gerrymandering to poll closures. And with vivid characters, she explores the resistance: the organizing, activism, and court battles to restore the basic right to vote to all Americans.

One Person, No Vote reads like a speedy sequel of sorts to her previous book, the elegant and illuminating best-seller White Rage . . . Her new book seems to have been written from a state of emergency, in an adrenaline-fueled sprint. Anderson is a stinging polemicist; her book rolls through a condensed history of voting rights and disenfranchisement, without getting bogged down in legislative minutiae. This is harder than it looks . . . This trenchant little book will push you to think not just about the vote count but about who counts, too. - Jennifer Szalai, New York Times

Carol Anderson is the Charles Howard Candler Professor and Chair of African American Studies at Emory University. She is the author of White Rage, which won the National Book Critics Circle Award, Bourgeois Radicals, and Eyes off the Prize. She was named a Guggenheim Fellow for Constitutional Studies. She lives in Atlanta, Georgia.
If the item details above aren’t accurate or complete, we want to know about it. Report incorrect product info.