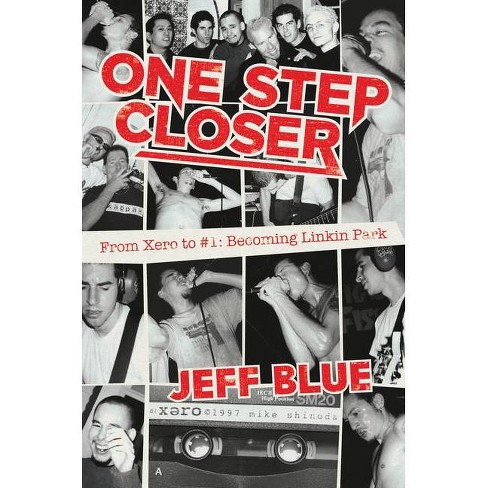 The dramatic story of the unlikely partnership that led to Hybrid Theory, the biggest-selling debut album of the 21st Century. From the unique perspective of the executive who discovered them, One Step Closer reveals how Brad Delson's college internship was a catalyst for a group of young musical visionaries, led by Mike Shinoda, which gave rise to a band that survived countless rejections, exceeded everyone's expectations but their own, and became the voice of a generation. This against-all-odds story chronicles the early days of Linkin Park, from their first demo and Whisky a Go Go performance as Xero, through their tireless efforts to perfect their iconic sound and the discovery of Chester Bennington. Jeff Blue was there when no one else believed--first as their publisher, then as their A&R guy. This is his memoir of that incredible journey. Riveting and inspiring, One Step Closer is a testament to perseverance, as well as a detailed behind-the-scenes account of the building of a dream and what it takes to make it. "Resilience, drive and the ability to overcome adversity are the qualities that create stars. Adversity may make or break you. But adversity primarily reveals you. In the case of Blue and Linkin Park, it revealed greatness." --Forbes

Jeff Blue is a multi-platinum A&R executive, producer, songwriter, music publisher, attorney, journalist, and manager whose acts have collectively sold over one-hundred million albums. He has been A&R at Warner Bros., RCA, Interscope, Atlantic, Virgin, Jive Records, and Zomba Music. He received a BMI Songwriter Award in 2008, a Hollywood Lifetime Achievement Award in 2018, and a Music Influencer of the Year Award 2017. As a songwriter, he has been signed to Universal Music, Warner Chappell, Zomba, and BMG Music Publishing. His articles have been published in Billboard and HITS, and he has lectured internationally. In addition to Linkin Park, he's worked with Macy Gray, Limp Bizkit, Korn, Daniel Powter, the Last Goodnight, Hoobastank, Better Than Ezra, DJ Ashba, and co-music supervised Aaliyah's Queen of the Damned soundtrack. He lives in Los Angeles where he received his undergraduate degree at UCLA, and law degree from Loyola Law School.
If the item details above aren’t accurate or complete, we want to know about it.

Kind Is the New Classy - by Candace Cameron Bure (Hardcover)

Sittin' in - by Jeff Gold (Hardcover)

Make it a movie!

5 out of 5 stars
soldier100 - 7 months ago
I feel inspired, empowered, & a renewed fire to get my priorities straight & follow my heart & dreams. We have the power to make our lives purposeful is the take I got from this roller coaster ride of a book, in addition to in depth look at one of the most prolific bands of the last 25 years. A no holds barred look into how to shut out the. haters & follow your dreams. I learned a ton about the music biz & what it takes to become a star, or an exec in the industry. I also learned a lot about publishing, record deals etc. I can’t say enough good things about the writing & the integrity. I thought that there would be some of the usual shade here, but it was all super authentic, objective look into every step, every roadblock, all the stress drama and perseverance it took to make this band happen. It is a lot of dialog so it seems like this is a no brainer for a film or tv series. Very fast paced. Loved it. Kudos! and Thanks for making this band happen!!!!
1 guest found this review helpful. Did you?

5 out of 5 stars
Monnize Wolff - 11 months ago
This book was such an easy and fun read filled with dialogue and detailed memories. Jeff did a great job allowing us into his world and giving us a glimpse of the music industry from his side of fame. I finished the book wanting more, and being so inspired by the characters I fell in love with throughout. Whether or not you are a Linkin Park fan, this book is a clear and direct testament to perseverance, friendship, love, hard work, and passion. Whatever industry you're in, and especially if you're passionate about the entertainment industry. This story depicts countless rejections in an industry most don't get a glimpse of. The reader gains an appreciation and understanding of everyone working behind the scenes, giving it their all, for all of their dreams to come true. Jeff will make you feel like you're right there with him and the band through the humble beginnings. This book details everything it took for Linkin Park to make it. The book paints such a clear image of the characters since Jeff was so close with them. I was inspired to go back and really dig into EVERY word in their songs. This book really shed a lot of light into feelings behind the lyrics and into the souls behind all the fame. This book travelled with me to parks, on planes, and everywhere I had some free time to read until I was done. You won't want to put it down, and you may just want to pick it back up a second time! Truly such an inspiring story. Get yourself a copy!
2 guests found this review helpful. Did you?

5 out of 5 stars
Cynthia E - 2 years ago
Wow, I just finished reading & I can honestly say I have a renewed energy. It's written like a movie (which it should become) and details the period of time as well as the passion and belief in people and ideals that are so sorely lacking in today's society. The band was rejected so many times but the band and Jeff Blue kept pushing ahead. I won't spoil it, but there are non-stop rollercoaster up and down moments, that seriously kept me reading through the night. I finished the entire book in two days. So excited. Linkin Park was a band that no one believed in and they made a historical impact. Read this book! Its lessons are valuable no matter what you do. RIP Chester
3 guests found this review helpful. Did you?

One of the best books I’ve ever read!

5 out of 5 stars
Jen - 2 years ago
This book literally changed my life. The inspiration and faith it instilled in myself motivated me through a really hard time in my life. This is the story of how hard work and perseverance separate talented people from the mega stars. I’m 22, so I was just an infant when this band came out but their story and music and the way the author risked everything for something he believed in reigns true today and forever. Totally recommend!
2 guests found this review helpful. Did you?