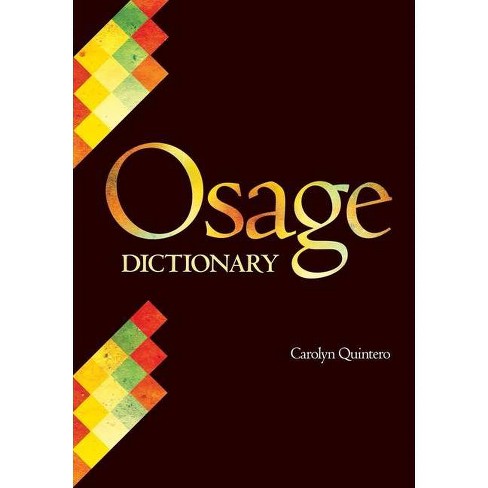 $55.99
0 out of 5 stars with 0 reviews
be the first!be the first! ratings
Shipping
Free standard shipping with RedCard
Help us improve this page

Osage, a language of the Dhegiha branch of the Siouan family, was spoken until recently by tribal members in northeastern Oklahoma. No longer in daily use, it was in danger of extinction. Carolyn Quintero, a linguist raised in Osage County, worked with the last few fluent speakers of the language to preserve the sounds and textures of their complex speech. Compiled after painstaking work with these tribal elders, her Osage Dictionary is the definitive lexicon for that tongue, enhanced with thousands of phrases and sentences that illustrate fine points of usage.

Drawing on a collaboration with the late Robert Bristow, an amateur linguist who had compiled copious notes toward an Osage dictionary, Quintero interviewed more than a dozen Osage speakers to explore crucial aspects of their language. She has also integrated into the dictionary explications of relevant material from Francis La Flesche's 1932 dictionary of Osage and from James Owen Dorsey's nineteenth-century research.

The dictionary includes over three thousand main entries, each of which gives full grammatical information and notes variant pronunciations. The entries also provide English translations of copious examples of usage. The book's introductory sections provide a description of syntax, morphology, and phonology. Employing a simple Siouan adaptation of the International Phonetic Alphabet, Quintero's transcription of Osage sounds is more precise and accurate than that in any previous work on the language. An index provides Osage equivalents for more than five thousand English words and expressions, facilitating quick reference.

As the most comprehensive lexical record of the Osage language--the only one that will ever be possible, given the loss of fluent speakers--Quintero's dictionary is indispensable not only for linguists but also for Osage students seeking to relearn their language. It is a living monument to the elegance and complexity of a language nearly lost to time and stands as a major contribution to the study of North American Indians.