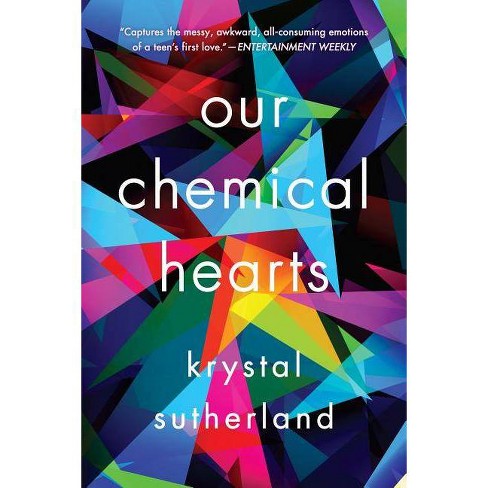 $9.59
MSRP$10.99
no reviews yet
be the first!be the first! ratings
Shipping
Not available
Help us improve this page

Praise for Our Chemical Hearts

"The most romantic read of the season is an arguably anti-YA story... It's the complex chemistry between Henry and Grace that touches the heart and doesn't let go."--USA Today "The author pulls no punches... emotionally engaging."--Kirkus Reviews

"This much-buzzed-about debut captures the messy, awkward, all-consuming emotions of a teen's first love."--Entertainment Weekly, Fall Books Preview "Emotionally complex, funny, filled with well-realized and diverse characters and realistic motivations, Sutherland's debut will stick with readers."--Booklist "This magnificent debut from 26-year-old Australian author Krystal Sutherland tracks the unlikely romance of Henry Page and Grace Town, two very different teens chosen to edit their high school paper together...You could probably learn a thing or two from [Henry's] and Grace's emotional odyssey."--Teen Vogue, "October's Best New YA Books" "This book delves far deeper than the typical high school romance, and its savvy wordplay and Henry's self-deprecating charm will win over fans of Stephen Chbosky's The Perks of Being a Wallflower and John Green's The Fault in Our Stars."--School Library Journal

"Henry is surrounded by well-drawn friends and family, and Grace is a fascinating cipher, in a book that's anything but a predictable romance."--B&N Teen, "Most Anticipated October YA Books" "I'm sorry to have to do this to you, but the love story of Henry and Grace is going to kick you in the emotional gut."--Bustle, "Best New YA Novels Coming in October" "Perhaps one of the most entertaining features of the novel is the irreverent and funny teen banter that masks their deeper feelings. Best of all, though, is the engaging story that unfolds at just the right pace, drawing the reader in as the stakes get higher and decisions must be made."--VOYA "Henry's first language is clever, angst-driven wit, and this pair is as sharp and quippy as John Green's Hazel and Gus ... Fans of romance driven by stylized narration are the audience for this."--BCCB
If the item details above aren’t accurate or complete, we want to know about it. Report incorrect product info.