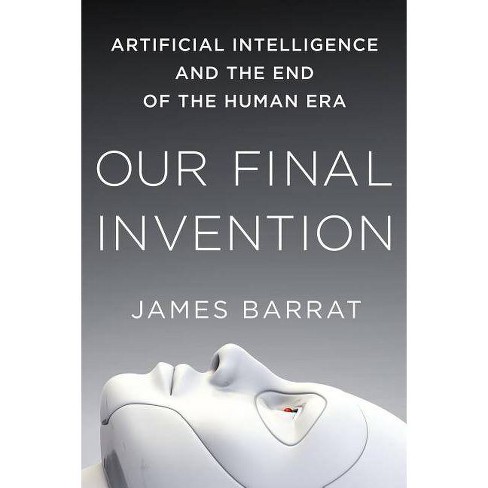 "The Internet is usually considered a breakthrough in technological--and even social--progress. The promises that it holds for our future are discussed in terms of an utopian vision--intelligent, helpful robots, enhanced brain function, disease-and-famine ridding nanotechnology, and other positive benefits. But there's another, rarely discussed and far darker possibility. As [this book] argues, we may be racing towards our own annihilation, as the military, academia, and corporate advances in artificial intelligence may lead to an uncontrollable new lifeform far smarter and more powerful than we can imagine"--

In as little as a decade, artificial intelligence could match and then surpass human intelligence. Corporations and government agencies around the world are pouring billions into achieving AI's Holy Grail--human-level intelligence. Once AI has attained it, scientists argue, it will have survival drives much like our own. We may be forced to compete with a rival more cunning, more powerful, and more alien than we can imagine. Through profiles of tech visionaries, industry watchdogs, and groundbreaking AI systems, James Barrat's Our Final Invention explores the perils of the heedless pursuit of advanced AI. Until now, human intelligence has had no rival. Can we coexist with beings whose intelligence dwarfs our own? And will they allow us to?

"A hard-hitting book about the most important topic of this century and possibly beyond -- the issue of whether our species can survive. I wish it was science fiction but I know it's not." --Jaan Tallinn, co-founder of Skype

"The compelling story of humanity's most critical challenge. A Silent Spring for the twenty-first century." --Michael Vassar, former President, Singularity Institute "Barrat's book is excellently written and deeply researched. It does a great job of communicating to general readers the danger of mistakes in AI design and implementation." --Bill Hibbard, author of Super-Intelligent Machines "An important and disturbing book." --Huw Price, co-founder, Cambridge University Center for the Study of Existential Risk "Our Final Invention is a thrilling detective story, and also the best book yet written on the most important problem of the twenty-first century." --Luke Muehlhauser, Executive Director, Machine Intelligence Research Institute "Enthusiasts dominate observers of progress in artificial intelligence; the minority who disagree are alarmed, articulate and perhaps growing in numbers, and Barrat delivers a thoughtful account of their worries." --Kirkus Reviews "Science fiction has long explored the implications of humanlike machines (think of Asimov's I, Robot), but Barrat's thoughtful treatment adds a dose of reality." --Science News "This book makes an important case that without extraordinary care in our planning, powerful 'thinking' machines present at least as many risks as benefits. ... Our Final Invention makes an excellent read for technophiles as well as readers wishing to get a glimpse of the near future as colored by rapidly improving technological competence." --New York Journal of Books "A dark new book by James Barrat, Our Final Invention: Artificial Intelligence and the End of the Human Era, lays out a strong case for why we should be at least a little worried." --NewYorker.com "You can skip coffee this week -- Our Final Invention will keep you wide-awake." --Singularity Hub "Barrat has talked to all the significant American players in the effort to create recursively self-improving artificial general intelligence in machines. He makes a strong case that AGI with human-level intelligence will be developed in the next couple of decades. ... His thoughtful case about the dangers of ASI gives even the most cheerful technological optimist much to think about." --Reason "If you read just one book that makes you confront scary high-tech realities that we'll soon have no choice but to address, make it this one." --The Washington Post

James Barrat is a documentary filmmaker who's written and produced films for National Geographic, Discovery, PBS, and many other broadcasters in the United States and Europe. He lives in Annapolis, Maryland, with his wife and two children.
If the item details above aren’t accurate or complete, we want to know about it. Report incorrect product info.