Out There - by Kate Folk (Hardcover) 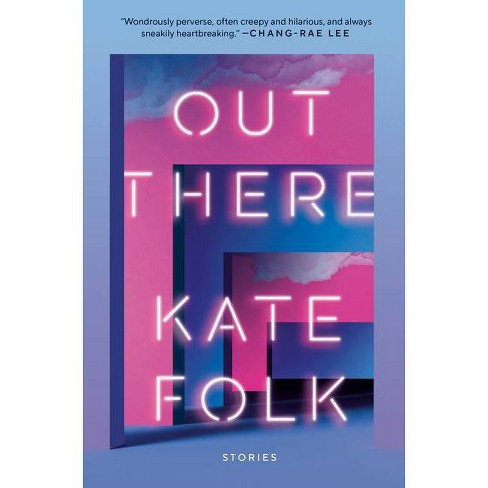 "Full of indelible characters and darkly comic twists, the stories in [this] collection are perfectly pitched for the madness of our modern moment. A ward for a mysterious bone-melting disorder is the scene of a perilous love triangle. A curtain of void obliterates the globe at a steady pace, leaving one woman to decide whom she wants to spend eternity with. A woman navigates finding a partner while beautiful humanoid robots called "blots" have infiltrated the dating apps of San Francisco, dispatched by Russian hackers to steal data. And in a companion piece, a woman and a blot find connection in an unexpected yet tender love story. As this debut collection explores what it means to face the void, human beings try to find their way in bizarre and dystopic settings, whether their own body, their relationships, their home, or the world at large. Imaginative, genre-bending, and oddly prescient, Out There depicts a landscape that is eminently of-the-moment, terrifying but ultimately hopeful"--

A thrilling new voice in fiction injects the absurd into the everyday to present a startling vision of modern life, "[as] if Kafka and Camus and Bradbury were penning episodes of Black Mirror" (Chang-Rae Lee, author of My Year Abroad).

"Stories so sharp and ingenious you may cut yourself on them while reading."--Kelly Link, author of Get In Trouble

With a focus on the weird and eerie forces that lurk beneath the surface of ordinary experience, Kate Folk's debut collection is perfectly pitched to the madness of our current moment. A medical ward for a mysterious bone-melting disorder is the setting of a perilous love triangle. A curtain of void obliterates the globe at a steady pace, forcing Earth's remaining inhabitants to decide with whom they want to spend eternity. A man fleeing personal scandal enters a codependent relationship with a house that requires a particularly demanding level of care. And in the title story, originally published in The New Yorker, a woman in San Francisco uses dating apps to find a partner despite the threat posed by "blots," preternaturally handsome artificial men dispatched by Russian hackers to steal data. Meanwhile, in a poignant companion piece, a woman and a blot forge a genuine, albeit doomed, connection. Prescient and wildly imaginative, Out There depicts an uncanny landscape that holds a mirror to our subconscious fears and desires. Each story beats with its own fierce heart, and together they herald an exciting new arrival in the tradition of speculative literary fiction.

"Out There is for readers who consider body horror to be a love language. True romantics will swoon either despite or because of the gore that accompanies these sharp, affable stories . . . Folk's stories have been compared to Shirley Jackson's, and this is most apparent in the way Folk balances her horror with humor."--The New York Times Book Review

"[The short story] Out There originally ran in the New Yorker and was something of a viral sensation. Fans of the story won't be disappointed by the collection, which also explores a gendered territory somewhere in the borderlands of magical realism, weird horror, sci-fi and literary fiction about jaded relationships."--Los Angeles Times

"Folk's ample imagination ably . . . offer[s] a perfect encapsulation of our modern madnesses, like an Alice's looking glass for our social media-obsessed age."--Chicago Review of Books "[Folk] writes witty, cinematic fiction that merges familiar scenarios with uncanny menace [and] capably captures the lunacy of the moment we're living through."--San Francisco Chronicle "Peppered with laugh-out-loud cringy yet relatable observations . . . it's hard to pinpoint the exact equation that makes each story so funny, poignant, and memorable."--Catapult "[Folk] builds worlds that hover chillingly between ours and unfettered imagination. Her writing is uncanny and unsentimental and comic, a funhouse mirror showing us how strange we truly are."--Electric Lit "A perfect blend of sci-fi, realism, and tinges of Kafka-esque horror . . . It'll break your brain in the best possible way."--Debutiful "Audacious . . . Folk's debut collection contain[s] Black Mirror-esque meditations on intimacy and connection in a mad world."--Literary Hub "[These] stories dig even deeper into the eerie and weird . . . but most uncanny of all is Folk's own voice, imaginative, sharp, and unsettling, human and alien together."--The Millions "Kate Folk's stories inhabit otherworldly realms where exquisite language and beguiling characters excavate the very nature of love and existence."--Adam Johnson

"Wonderfully weird and weirdly wonderful, Kate Folk is a dazzling talent."--Karen Joy Fowler "Wry, riveting, and ambitious, Out There manages to be both brilliantly inventive and emotionally resonant."--Kimberly King Parsons

"Kate Folk is a literary swordsmith of feline dexterity."--Lisa Locascio

"The stories in this stunning debut are funny, fearless, and moving portraits of life shaped by the ever-widening shadow of technological progress."--Isle McElroy

"This collection of internet gothic fiction delighted, unsettled, and moved me in the best possible way."--Mary South

Kate Folk has written for publications including The New Yorker, The New York Times Magazine, Granta, McSweeney's Quarterly Concern, and Zyzzyva. She's received support from the Headlands Center for the Arts, MacDowell, the Vermont Studio Center, and the Virginia Center for the Creative Arts. Recently, she was a Wallace Stegner Fellow in fiction at Stanford University. She lives in San Francisco. Out There is her first book.
If the item details above aren’t accurate or complete, we want to know about it. Report incorrect product info.