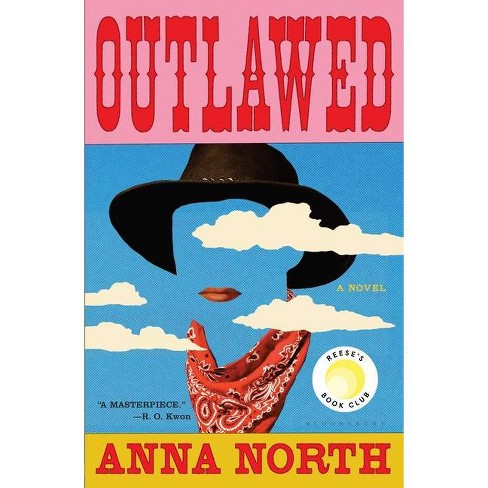 The Crucible meets True Grit in this riveting adventure story of a fugitive girl, a mysterious gang of robbers, and their dangerous mission to transform the Wild West.

A masterpiece. - R.O. Kwon The Crucible meets True Grit in this riveting adventure story of a fugitive girl, a mysterious gang of robbers, and their dangerous mission to transform the Wild West. In the year of our Lord 1894, I became an outlaw. The day of her wedding, 17 year old Ada's life looks good; she loves her husband, and she loves working as an apprentice to her mother, a respected midwife. But after a year of marriage and no pregnancy, in a town where barren women are routinely hanged as witches, her survival depends on leaving behind everything she knows. She joins up with the notorious Hole in the Wall Gang, a band of outlaws led by a preacher-turned-robber known to all as the Kid. Charismatic, grandiose, and mercurial, the Kid is determined to create a safe haven for outcast women. But to make this dream a reality, the Gang hatches a treacherous plan that may get them all killed. And Ada must decide whether she's willing to risk her life for the possibility of a new kind of future for them all. Featuring an irresistibly no-nonsense, courageous, and determined heroine, Outlawed dusts off the myth of the old West and reignites the glimmering promise of the frontier with an entirely new set of feminist stakes. Anna North has crafted a pulse-racing, page-turning saga about the search for hope in the wake of death, and for truth in a climate of small-mindedness and fear.

Outlawed stirs up the western with a provocative blend of alt-history and feminist consciousness. The result is a thrilling tale eerily familiar but utterly transformed . . . In North's galloping prose, it's a fantastically cinematic adventure that turns the sexual politics of the Old West inside out. - Ron Charles, Washington Post

Anna North presents a far different perspective on the [Western] genre, one forged by women, Black and nonbinary people looking for the freedom, space and right to exist in a world that largely doesn't want them . . . The vividness with which she writes this world is one that's captivating and hard to put down. - USA Today "Best New Books" Fans of Margaret Atwood's The Handmaid's Tale are in for a stellar ride where gender roles, sexuality, agency, and self-discovery come together, making North's story as experimental and novel as it is classic. - Boston Globe The heroes of the traditional Western were always sure about what made them the way they were; what made a man a man. For Ada and the other 'outlaws' of this spirited novel, the frontiers of gender and sexuality beckon to be explored. - Maureen Corrigan, NPR Virtuosic. - The New Yorker A thoroughly gripping, genre-subverting and -defining marvel of a novel. - Refinery29 "Most Anticipated Books of 2021" From the author of the Lambda Literary Award-winning The Life and Death of Sophie Stark comes an alt-history feminist western . . . Think Foxfire by way of Maddie from True Grit, yet North's swashbuckling saga is wholly her own. - O, the Oprah Magazine (Best LGBTQ Books of 2021) North's knockout latest chronicles the travails of a midwife's daughter who joins a group of female and nonbinary outlaws near the end of the 19th century . . . The characters' struggles for gender nonconformity and LGBTQ rights are tenderly and beautifully conveyed. This feminist western parable is impossible to put down. - Publishers Weekly (starred review) 2021 is already a year that could use a little joy. Here to provide some is the scrappy new feminist Western novel Outlawed . . . It's an absolute romp and contains basically everything I want in a book: witchy nuns, heists, a marriage of convenience, and a midwife trying to build a bomb out of horse dung. - Vox There is something both thrilling and intimidating about the first book of the year to receive rave reviews, and we didn't have to wait long for it in 2021. Published during the first week of the New Year, Anna North's Outlawed sets a high bar for the 12 months of publishing still to come . . . It upends the tropes of the traditionally macho and heteronormative genre while also being a rip-snortin' good read, too. - The Week (Most Anticipated Books of the Year) A western unlike any other, Outlawed features queer cowgirls, gender nonconforming robbers and a band of feminists that fight against the grain for autonomy, agency and the power to define their own worth. - Ms. Earns its place in the growing canon of fiction that subverts the Western genre by giving voice to the true complexity of gender and sexual expression, as well as race relations, that has previously been pushed to the margins of traditional cowboy or westward expansion tales. A genre- (and gender-) bending take on the classic Western. - Kirkus A lovely slow draw in the world of the Old West, a story about the people who don't belong, portraying a realistic, close-minded world that only accepts women willing to fit into a specific mold . . . It's exciting to read a Western tale that features such a range of women and queer characters, and Ada herself is a bold protagonist whose desire to learn more about the female reproductive system and how it actually functions runs fiercely in her veins. Perfect for fans of Sarah Gailey's Upright Women Wanted. - Booklist This book has me, and you should have this book. - Glamour (Best of the Month) A gender-bending, genre-hopping yarn that's part frontier novel, part Handmaid's Tale and all ripsnorting fun . . . North easily subverts expectations as her characters struggle to find their identities in a patriarchal world. - Bookpage Anna North has written a captivating Western unlike any other, with unique rhythms, dusty lands, and characters like new friends brought in on high winds. A grand, unforgettable tale. - Esmé Weijun Wang, author of THE COLLECTED SCHIZOPHRENIAS I'm dazzled by this feminist Western about a world in which women's worth and right to live are determined by the vagaries of fertility. Set in an alternate past, one all too similar to our today, Outlawed is terrifying, wise, tender, and thrilling. A masterpiece. - R.O. Kwon, author of THE INCENDIARIES Outlawed flips the script on the beloved Western genre and gives us the iconic heroine-on-the-run we deserve. Anna North is a riveting storyteller . . . Reader, you are in for a real treat. - Jenny Zhang, author of SOUR HEART A moving and invigorating complication of the Western, highlighting chosen family, love, and survival among outcasts in another American timeline. As she mines the genre for vital new stories, North beautifully shines a light on our real past and conveys a warning for the future. - Lydia Kiesling, author of THE GOLDEN STATE Fans of Margaret Atwood and Cormac McCarthy finally get the Western they deserve in Outlawed, but Anna North doesn't just reimagine a damsel-in-distress as her own savior. She plays with the promise and danger of the frontier, introducing us to an America we never knew--and one we know all too well. - Alexis Coe, New York Times bestselling author of YOU NEVER FORGET YOUR FIRST and ALICE+FREDA FOREVER This ain't your grandpa's Western. Yes, there's gun slinging, hosses, banks to rob, and a no-good Sheriff. But then no, this novel is as if The Handmaiden's Tale had a baby with the real Butch Cassidy... It's rough, and soft. Profanely sweet with wide-eyed openness, and an exciting culmination that ricochets off the bulk of the tale...Start Outlawed and just try to put it down. - Sidney Herald

Anna North is a graduate of the Iowa Writers' Workshop and the author of two previous novels, America Pacifica and The Life and Death of Sophie Stark, which received a Lambda Literary Award in 2016. She has been a writer and editor at Jezebel, BuzzFeed, Salon, and the New York Times, and she is now a senior reporter at Vox. She grew up in Los Angeles and lives in Brooklyn.
If the item details above aren’t accurate or complete, we want to know about it.

The Lamplighters - by Emma Stonex (Paperback)

Woman of Light - by Kali Fajardo-Anstine

The Falling - by Anna Todd

After: The Graphic Novel (Volume One) - by Anna Todd

4 out of 5 stars
LissyG13 - 11 months ago
It was a quick read, cool story… I was expecting more towards the ending though.
Did you find this review helpful?

Wanted to Love it

3 out of 5 stars
Bridgette - 1 year ago, Verified purchaser
I desperately wanted to love this. Sadly, I just didn't. It was a good enough story, written in a somewhat naïve perspective. I just wanted more out of it. I had high expectations for a female western and this just fell a little short!
1 guest found this review helpful. Did you?

4 out of 5 stars
Would recommend
Dlowe31 - 2 years ago
I always look forward to books that are part of Reese’s Book Club. This one is a super quick read. I was hoping for different outcomes through out the book / or closure on events that occurred in the book, but it’s left up to the reader’s imagination. I would recommend for a quick read. Not the best book I have read - but did enjoy.
Did you find this review helpful?

5 out of 5 stars
Would recommend
easalerno - 2 years ago, Verified purchaser
Interesting story and colorful characters! A quirky, fun, & quick read!!
Did you find this review helpful?

1 out of 5 stars
Would not recommend
SL - 2 years ago
It was poorly written. The story is choppy, predictable, and full of pandering language. It reads like juvenile fiction or a lazy class assignment quickly drawn up just before it's due. I don't recommend it.
1 guest found this review helpful. Did you?

Not for me but it might be a good for you

3 out of 5 stars
Would not recommend
ShanKL - 2 years ago
The year is 1894 and barren women are thought to be witches. Religion states in the west that a women’s fate is tied to her ability to bear children for Baby Jesus. To escape persecution, these women often had to seek refuge away from everything they’ve ever known - their family, friends and communities that loved them until they couldn’t fulfill their duty. Ada, newly married, finds herself unable to have children at the age of seventeen. With limited choices for survival, she is sent away to a convent where she obsesses over the medical reasons for such an aliment. She is then led to join an outlaw gang of women exiled as they also couldn’t perform their duties as a wife. The story chronicles Ada’s journey from wife to outlaw to finally finding her destiny. This alternate history take has a crazy cast of characters in the gang from Kid, the ring leader, who is coping with mental illness. The Hole in the Wall Gang also encounter racism and homophobia throughout the pages. This book tried to hard for me, and had to much happening after Ada’s banishment losing what it set out to showcase. It was calamity after calamity for the gang. And, I was heartbroken as I thought Ada finally found a man who would love her and that is ripped away. Why is she destined to be a spinster?
Did you find this review helpful?