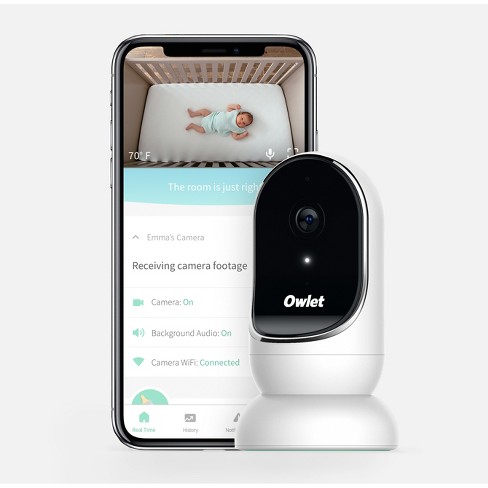 Hear and see your child from anywhere with the Owlet Cam.

The Owlet Cam streams HD 1080p video with night vision and two-way audio directly to your smartphone over a secure, encrypted Wi-Fi connection. An expansive 130-degree wide angle lens gives you a complete view of your baby’s sleep environment, and the innovative cable guard covers keeps baby safe from loose wires. Enable the background audio function to stay connected to your baby while using your phone for other browsing. The Owlet Cam also works as a nanny cam, and includes a magnetic base and wall mounting kit to ensure parents can safely mount the camera at the perfect angle.

The Owlet Cam integrates seamlessly with the Owlet Smart Sock* in the Owlet app for detailed wellness insights.

*Smartphone not included
If the item details above aren’t accurate or complete, we want to know about it. Report incorrect product info.

1 out of 5 stars
Would not recommend
CatMarie - 6 days ago
I so regret buying this monitor. It consistently says that the internet connection is only "fair" but multiple speed tests prove that there is a better connection than that. The camera randomly goes out and says "disconnected" even though the internet is up and working as normal. Not sure if this is an issue with the device or with the app, but either way it is totally unacceptable for it's purpose. At first I thought the cord cover was a genius idea, but then when we ended up having to remove it to replace with a new monitor, we get paint ripped off the walls. This is after the baby has come so we can't exactly repaint his room, so now we are stuck with messed up walls in his nursery. Very upsetting!! We ended up getting a much more reliable and clear picture monitor for less money.
1.0
quality
out of 5
quality: 1 out of 5
1.0
value
out of 5
value: 1 out of 5
Did you find this review helpful?
Report review

I wish I would have never wasted my money

We bought the Owlet Camera for our son who was born 4 months ago. Before we bought it, we did a lot of research, and we saw the reviews for the camera were not very good. We bought it thinking that it was better than the reviews said, and it was not. The app only works 20% of the time, and when it does, the sound doesn’t work. If my baby is sleeping, most of the time I can’t even see him because the app won’t turn on. It really upsets me because if something happens, I wouldn’t be able to prevent it because I cannot see him. I absolutely HATE this camera. I’m not usually one to leave bad reviews, but Owlet, please do better. If the app would just work, this would be a great product. To be honest, I wish we would have never bought it.

Did you find this review helpful?
Report review

Not what I expected

3 out of 5 stars
Kyky - 18 days ago
originally posted on owletcare.com

For the convenience of using this camera to watch baby and sock readings at the same time it’s nice, Also the temp reading on camera is nice,but that’s about it. The camera is constantly losing connection. When it is connected. The sound only works maybe 10% of the time. It like to cut out. I had to get a separate sound monitor just in case it goes out. Which is all the time. I have a second camera for when this one stops working. I know it’s not my WiFi because my other camera is just fine when the owlet one isn’t working. Not worth the price for sure.
Did you find this review helpful?
Report review

Works great could use improvement on app

4 out of 5 stars
Would recommend
pureCheri - 28 days ago
We have our cam set up to watch our 2 yr old during naps and eventually our newborn when they are born. Currently the cam works great! Its connected to our 2.4 GHz wifi connection, even though we do have a 5 GHz connection as well. It connects easily with my smartphone and tells us the temperature in the room perfectly. I'm really a big fan of the two way talk because my last monitor did not have that feature. The clarity is really nice both day and night. I would like a notification to alert me on the app that sound is being detected when I have it muted. That's why I'm giving it 4 stars. I have read somewhere that they are working on that update to the app. I'm overall impressed by the system and plan to buy another cam when we move. This is my experience with the Owlet Camera and I know this device is blessed to work for us and to not have any issues. Power of obedience to God and prayer over your devices works!
5.0
value
out of 5
value: 5 out of 5
5.0
quality
out of 5
quality: 5 out of 5
2 guests found this review helpful. Did you?
Report review

2 out of 5 stars
Would not recommend
Anonymous - 1 month ago, Verified purchaser
great quality but the camera is junk. I used for a few months and the camera was constantly disconnecting, the sound never stayed on, and now I’m in the process of trying to get my baby to sleep in her room and the camera isn’t working at all. I called owlet customer service and they acted like I was a moron and told me my camera was defective. I will be returning the camera to target. I do have the sock and I LOVE it! But would not recommend the camera.

1 out of 5 stars
Would not recommend
AC - 1 month ago
We love our owlet sock. This camera is total garbage! It constantly turns off and disconnects from wifi or will not connect at all, we have great wifi and the sock works well using the same app. We have tried every troubleshooting scenario with no improvement.
1.0
quality
out of 5
quality: 1 out of 5
1.0
value
out of 5
value: 1 out of 5
1 guest found this review helpful. Did you?
Report review

Extremely Disappointed, Audio goes out, Was sent two new ones to try and neither worked

1 out of 5 stars
Would not recommend
CoopEarl - 1 month ago, Verified purchaser
I took my time researching monitors and bought the camera end of May 2019, along with the Lollipop brand monitor. I set them both up and periodically would check the feed on my phone for picture quality and features over a week. Note: my son was not yet napping or sleeping in his nursery, so I put stuffed animals in his crib. Owlet has less features, but the picture quality and especially the night vision was better. At the time I was not concerned about being able to download videos. So we choose Owlet and returned the other. Months later when the time came and we started having him nap in his crib and we were continuously streaming video on our phones (Apple) the audio would cut in and out and then just shut off. The lag time was about 3 seconds. We would hard re-start the app and get the audio to work again but it would stop again. When rotating the phone for full screen viewing the screen would go black, and would have to re-start the app. After several weeks later, beginning of December, I reached out via e-mail to Owlet customer service about the audio issues, and did everything they suggested: remove device from app, logout of app, deleted and reinstall app, unplug camera, plug in and pair again with the app. We had improvement for about a week and the issues came back. Also it took about 4 days to get a response via e-mail. They sent out a new camera right after Christmas, and installed it, new cables and plug in adapter and the audio was worse! It was transmitting a very faint white noise. Not white noise from the sound machine in his room, you couldn’t hear anything from the room. And by faint I mean I had the volume full blast on my phone and you could barely hear it. At this point in time we were sleep training and my son was now sleeping in his room, and set up a simple $20 audio monitor so we could hear him. I emailed immediately what the issue was and that we were using a backup monitor now. I did some more research deep in the FAQ on the website, and it is a known problem that there is audio issues with Apple devices. I tried the app on my sister’s Android phone and no luck. 4 days later… the reply I received was “What exact audio issues are you having now?” Not even I’m sorry you are still having issues! At that point I was done, I said I want to return it and get my money back, and return the smart sock! I went and ordered the Lollipop monitor again. The next day when I did not get a response to the request to return the items I called into customer service. The gal I talked was a lot nicer and helpful, and seemed to think the new camera they sent was defective since it was not the same audio issue as before. Also said they had just done an update to the app, and asked if I would be willing to try a new camera. I was also told I could not return the camera and sock to them since I did not purchase it through their website. I received the new camera two days after calling customer service and immediately set it up. While I was setting it up, had just connected it and was attaching it to the wall mount when the audio went out. I restarted the app and it worked again. We continued to use it that night, with the backup audio monitor, and in the middle of the night the audio went out again. I’ll be returning the two they sent and setting up the Lollipop monitor. Hopefully Target will at least give us store credit for the original one we bought back in May.
1.0
quality
out of 5
quality: 1 out of 5
1.0
value
out of 5
value: 1 out of 5
1 guest found this review helpful. Did you?
Report review

1 out of 5 stars
FrontlinesParent - 1 month ago
originally posted on owletcare.com

We constantly have connectivity issues with the camera. We had a nest camera in our daughters room for years without any issues and got the owlet for our newborn and nothing but problems. It’ll work for a few night and then you have to reset it and remove it from the app and reinstall and it’s always right when you’re trying to put your little one to bed. OBNOXIOUS. Once owlet figures out how WiFi works, it’ll have a nice product.
Did you find this review helpful?
Report review