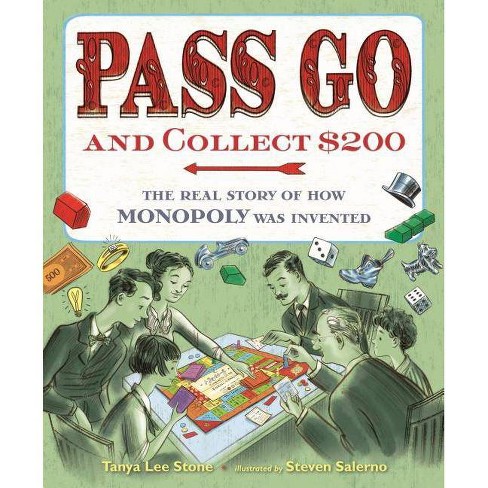 Boldness, imagination, and ruthless competition combine in this riveting story that sets the record straight on the history of Monopoly's origins--the board game was in fact created by a woman. Full color.x 11.

Boldness, imagination, and ruthless competition combine in Tanya Lee Stone and Steven Salerno's Pass Go and Collect $200, a riveting picture book history of Monopoly, one of the world's most famous games.

In the late 1800s lived Lizzie Magie, a clever and charismatic woman with a strong sense of justice. Waves of urban migration drew Lizzie's attention to rising financial inequality. One day she had an idea: create a game that shows the unfairness of the landlord-tenant relationship. But game players seemed to have the most fun pretending to be wealthy landowners. Enter Charles Darrow, a marketer and salesman with a vision for transforming Lizzie's game into an exciting staple of American family entertainment. Features back matter that includes Monopoly Math word problems and equations. Excellent STEM connections and resources. This title has Common Core connections. Christy Ottaviano Books

A real winner.--The Horn Book Salerno's soft, dynamic full-bleed illustrations reflect yet move beyond the aesthetics of the game and time period, making every page compelling and fresh . . . Stone delivers a winner.--Kirkus Reviews, starred review Readers are treated to a colorful historical account of a well-known board game, and the socioeconomic factors that affected its development. Salerno's vivid illustrations are kinetic and play upon the most exciting elements of the story. Highly recommended for nonfiction collections .--School Library Journal, starred review A brisk narrative pace propels the story . . . Salerno's lively, mixed-media illustrations carry the action forward.--Publishers Weekly

Stone personalizes this story by asking readers to consider instances when they've made changes to a game's original rules. . . Salerno's bold illustrations heighten the drama surrounding Monopoly's development and include glimpses of early versions of the game.--Booklist Stone is a deft hand at balancing historical absurdities with important social themes, and here her picture book format invites middle-grade readers to benefit from a lesson in entrepreneurship, even as they enjoy amassing trivia surrounding a familiar game. Salerno's retro illustrations recreate the milieu.--The Bulletin
If the item details above aren’t accurate or complete, we want to know about it. Report incorrect product info.