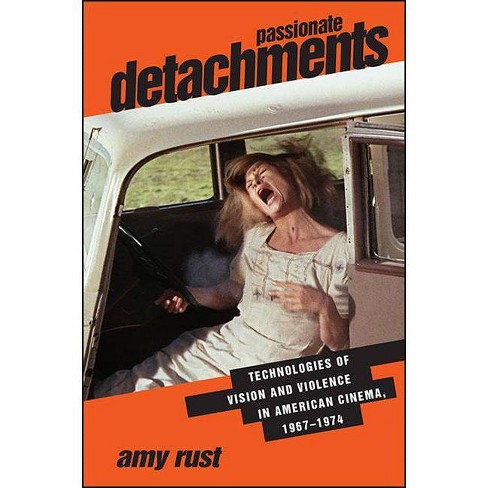 $19.99
no reviews yet
be the first!be the first! ratings
Shipping
Not available
Help us improve this page

Passionate Detachments investigates the rise of graphic violence in American films of the late 1960s and early 1970s and the popular aesthetics and critical responses this violence inspired. Amy Rust examines four technologies adopted by commercial American cinema after the fall of the Hollywood Production Code: multiple-camera montage, squibs (small explosive devices) and artificial blood, freeze-frames, and zooms. Approaching these technologies as figures, as opposed to mere tools, Rust traces the encounters they mediate between perception (what one sees, hears, and feels) and representation (how those sights, sounds, and feelings make meaning). These technologies, she argues, lend shape to film violence while organizing viewers' on- and off-screen relationships to it. The result proves meaningful for an era self-consciously and perilously preoccupied with bloodshed. The post-Code period found Americans across the political spectrum demanding visual--and increasingly violent--demonstrations of presumably "authentic" realities. Corroborating fantasies of authenticity from military to counterculture, these technologies challenge them as well, pointing, however unwittingly, to the violently classed, gendered, and racialized blind spots such fantasies harbor. More broadly, the technologies answer concerns that films control violence too much or too little. Offering neither mere discourse nor mere thrills, they recover sense and sensation for all, not some, or even most, depictions of bloodshed. As figures, the devices also remediate vision and violence for film theory, which exhibits distrust for each in spite of the complexities phenomenology and psychoanalysis have brought to cinematic perception and pleasure.
If the item details above aren’t accurate or complete, we want to know about it. Report incorrect product info.