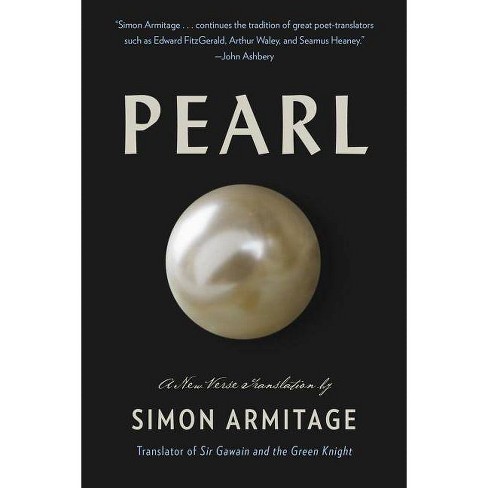 $23.49
0 out of 5 stars with 0 reviews
be the first!be the first! ratings
Shipping
Free standard shipping with RedCard
Help us improve this page

Simon Armitage, the acclaimed poet who brought Sir Gawain and the Green Knight to vivid life in "an energetic, free-flowing, high-spirited translation" (New York Times Book Review), turns his attention to another beloved medieval English masterpiece, the soulful Pearl. Believed to have been penned by the same author who wrote Sir Gawain and housed in the same original fourteenth-century manuscript, Pearl is here reanimated with Armitage's characteristic flair in the alliterative music of the original text.

Pearl describes a bereft father mourning the loss of his precious "Perle." Returning to the garden where she first disappeared, he observes the verdant shades of late summer--a cruel reminder of the grief that shadows his every waking thought. Succumbing to the afternoon heat, he falls into a trancelike sleep and dreams of a radiant apparition that closely resembles his Pearl. Standing before him across an unfordable stretch of water, the maiden reassures her father that she has been granted a home in heaven alongside Christ. At first overjoyed, then incredulous at the maiden's exalted stature, the dreamer is ultimately convinced of her providence by a series of tense, sorrowful arguments as she--much like Dante's Beatrice--leads him through the throes of grief toward a vision of paradise and divine redemption. At the brief, teasing glimpse of the kingdom of heaven, the dreamer rushes forward to join the maiden--only to be struck awake, his dream shattered and his irreplaceable Pearl lost once more.

Presented alongside the original text, and overseen by renowned medievalist James Simpson, Pearl is a spellbinding new translation of a classic medieval work. Remaining faithful to the intricate structure of the original, Armitage's virtuosic rendering of the lyrical dialogue between father and daughter arrives at the end only to echo the beginning; the poem emerges as a circular and perfected whole, much like the pearl itself. One of our most ingenious interpreters of Middle English, Armitage transforms this allegory of grief and consolation into a story that feels hauntingly immediate.