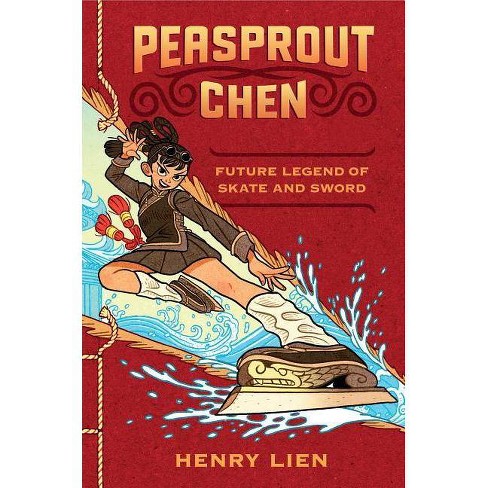 "The School for Good and Evil" meets "Crouching Tiger, Hidden Dragon" in this debut fantasy series about a young girl's quest to become a champion of wu liu, an art form that blends figure skating with martial arts.

"It's Hermione Granger meets 'Crouching Tiger, Hidden Dragon' meets the Ice Capades meets 'Mean Girls.'" For all its disparate ingredients, though, PEASPROUT CHEN: FUTURE LEGEND OF SKATE AND SWORD speaks in a single, strong voice, thanks to its spirited heroine. --The New York Times

Massively entertaining...Peasprout Chen is a future legend, indeed. --Publishers Weekly, Starred Review Welcome to Pearl Famous Academy of Skate and Sword, where the blades are sharp and the competition is fierce. Peasprout Chen dreams of becoming a legend of wu liu, the deadly and beautiful art of martial arts figure skating. As the first students from the rural country of Shin to attend Pearl Famous Academy of Skate and Sword, Peasprout and her little brother Cricket have some pretty big skates to fill. They soon find themselves in a heated competition for top ranking. Tensions rise when the dazzling pearl buildings of the Academy are vandalized and outsider Peasprout is blamed for the attacks by her rivals ... and even some friends. Now, she must uncover the true vandal to ensure peace between Shin and Pearl - all while becoming a champion.

"It's Hermione Granger meets 'Crouching Tiger, Hidden Dragon' meets the Ice Capades meets 'Mean Girls.'" For all its disparate ingredients, though, PEASPROUT CHEN: FUTURE LEGEND OF SKATE AND SWORD speaks in a single, strong voice, thanks to its spirited heroine. --The New York Times

For a rewarding and well-constructed plot in an uncommon setting--plus some effective genderqueer subversion at the end--this story can't be beat. --The Horn Book

The fictional wu liu that flourishes there--acrobatic fighting conducted on springy ice skates--stands a good chance of elbowing aside quidditch as the next big novel-inspired sport... luring fans of martial arts, well-built worlds, and romance back for ensuing adventure.--Bulletin of the Center for Children's Books Lien's exciting debut is a story of acceptance and bravery, friendship and hope. Peasprout dreams of becoming the best in wu liu, a mix of martial arts and figure skating...A riveting and complex read about new beginnings, family, and choices. --Booklist

Book Riot Top 25 Best Family Audiobooks of 2018 The narrator, Nancy Wu, finds just the right blade edge between girlish naïveté and brashness for our protagonist, who isn't about to be cowed by teenage queen bees or distracted by romance, and who registers her near-constant displeasure with epithets like "Ten thousand years of stomach gas!" -New York Times [Nancy] Wu glides deftly through the narration with distinct characterizations. ...Wu's pacing is flawless, slow and thoughtful or tense and fast when the story's action calls for it. In competition scenes, especially, Wu shines, imparting a breathlessness listeners can feel. ...By turns funny and serious, Peasprout Chen tackles tough subjects: immigration, family, and hard choices. This unique heroine will skate into the hearts of middle-grade listeners. -Booklist, Starred Review With dazzling versatility, narrator Nancy Wu immerses listeners in this complex East Asian-inspired fantasy about a martial arts legend in the making. ...Wu's narration captures Peasprout's every nuance--hubristic yet vulnerable, snarky yet sincere--alongside character voices that range from subtly accented to all-out caricature. Peppered with breathless wu liu action and bookended by original music, this memorable performance will leave listeners hoping for a sequel. -AudioFile, Earphones Award Winner

Henry Lien is a 2012 graduate of Clarion West. His short fiction has appeared in publications like Asimov's, earning several Nebula Award nominations. Born in Taiwan, Henry currently lives in Hollywood, California. Peasprout Chen is his debut novel.
If the item details above aren’t accurate or complete, we want to know about it. Report incorrect product info.