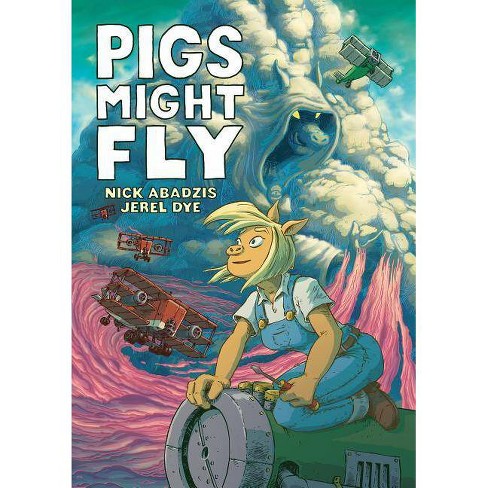 Magic and science clash in a world where highly evolved pigs fight their mortal enemies, the warthogs, for dominion of the skies in the new graphic novel from the author of the smash hit "Laika."

All the sensible hogfolk in Pigdom Plains know that if pigs were meant to fly, they'd have been born with wings--but there's no convincing Lily Leanchops. The daughter of renowned inventor Hercules Fatchops, Lily has watched her father's flying machines fail time and time again. Working in secret, Lily is trying to build what her father couldn't: an aircraft that actually works. And of course, she's following his example and employing scientific principals alone--not magic. (Well, a protection spell or two doesn't count, right?)

Lily's secret project takes on a new sense of urgency when a mysterious enemy emerges from beyond the mountains. The Warthogs are coming, and they're piloting flying machines powered by dangerous magic spells. To save Pigdom Plains, Lily must take to the skies in her own experimental aircraft--and there's no time for a test run.

Pigs Might Fly chronicles the adventures of a team of airplane-flying pigs, from knockout duo Nick Abadzis and Jerel Dye.

"Abadzis (Laika) packs his story with porcine wordplay....but it's the rapid pacing, intense action sequences, and wealth of skilled female characters that will stick with readers." --Publishers Weekly

" This graphic novel is a visual feast, with vivid world-building details drawn into the vibrant illustrations...and effective use of panel formatting to speed or slow pace according to dramatic needs." --Bulletin of the Center for Children's Books

"Follows in the trotters of fantasy comics past, which means it also acts as a nice primer for middle graders just starting out in the genre." --Kirkus

Nick Abadzis has been creating stories for both adults and children for nearly thirty years. In 2008 he was honored with an Eisner award for his graphic novel Laika. He currently writes the ongoing monthly series Doctor Who: The Tenth Doctor. He is British but lives in the New York City area with his wife and daughter.

Jerel Dye is a cartoonist living and working in the Boston area. He has produced several self-published comics and has contributed to anthologies such as Inbound, Minimum Paige, and the award-winning Winsor McCay tribute, Dream Another Dream. In 2012, he received the MICE comics grant for his minicomic From the Clouds.