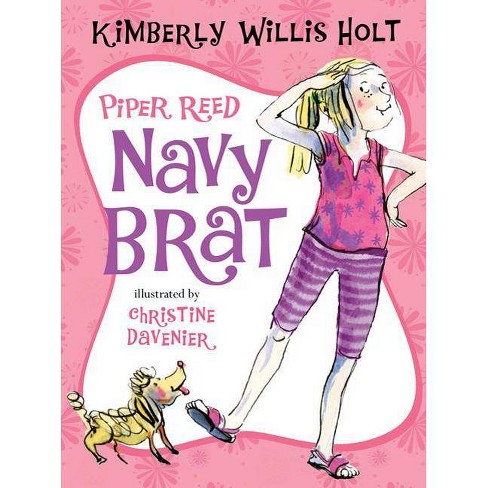 National Book Award winner Holt begins a brand-new series based on her own childhood experience as a member of a Navy family. Nine-year-old Piper Reed loves being part of a Navy family, and wherever she goes, adventure is sure to follow. Illustrations.

Based on her own childhood experience, Kimberly Willis Holt's Piper Reed, Navy Brat portrays the life of a Navy family with warmth and humor.

It's not easy being the middle child, especially when your dad is a Navy Chief. Meet Piper Reed, a spunky nine-year-old who has moved more times than she can count on one hand. From Texas to Guam, wherever Piper goes, adventure follows, inspired by her active imagination, free-wheeling spirit, and a bit of sister magic. Unlike her older sister, Piper loves being part of a Navy family, and unlike her little sister, Piper is no prodigy genius. Piper is Piper--fearless and full of life.

"This entertaining read will appeal to fans of Judy Moody and Ramona Quimby." --School Library Journal "...award-winning author Holt tells a lively family story that draws on her experiences of growing up a Navy brat." --Booklist "Crisp writing from a National Book Award winner..." --Publishers Weekly "Piper's lively imagination, wholesomeness and moments of 'sister magic' are likable and believable. This easy chapter book, based on Holt's own experiences, is spot on with the details of roving family life. Davenier's fluid black-and-white drawings fit the mood and characters . . . Launching a new series, Piper's foray sets sail with verve, fun and spunk." --Kirkus Reviews

Kimberly Willis Holt is the author of the Piper Reed series, including Piper Reed, Navy Brat, Piper Reed, Clubhouse Queen, and Piper Reed, Rodeo Star. She has written many award-winning novels, including The Water Seeker and My Louisiana Sky, as well as the picture books Waiting for Gregory and Skinny Brown Dog. A former Navy brat herself, Holt was born in Pensacola, Florida, and lived all over the U.S. and the world--from Paris to Norfolk to Guam to New Orleans. Holt long dreamed of being a writer, but first worked as a radio news director, marketed a water park, and was an interior decorator, among other jobs. A few years after she started writing, her third book, When Zachary Beaver Came to Town, won a National Book Award for Young People's Literature. She resides in West Texas with her family.

Christine Davenier has illustrated numerous children's books, and won a New York Times-Best Illustrated Award for The First Thing My Mama Told Me. She lives in Paris, France.
If the item details above aren’t accurate or complete, we want to know about it. Report incorrect product info.