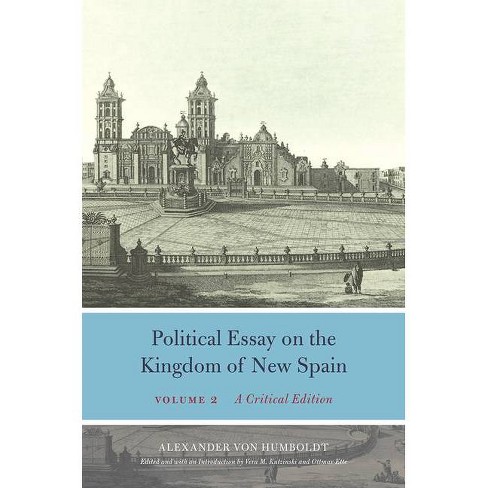 $65.99
0 out of 5 stars with 0 reviews
be the first!be the first! ratings
Shipping
Free standard shipping with RedCard
Help us improve this page

Volume 2 of this critical edition includes the translation of Volumes 3 and 4 of the second, revised French edition of Alexander von Humboldt's Essai politique sur le royaume de de Nouvelle Espagne from 1825 to 1827 as well as notes, supplements, indexes, and more. Alexander von Humboldt was the most celebrated modern chronicler of North and South America and the Caribbean, and this translation of his essay on New Spain--the first modern regional economic and political geography--covers his travels across today's Mexico in 1803-1804. The work canvases natural-scientific and cultural-scientific objects alike, combining the results of fieldwork with archival research and expert testimony. To show how people, plants, animals, goods, and ideas moved across the globe, Humboldt wrote in a variety of styles, bending and reshaping familiar writerly conventions to keep readers attentive to new inputs. Above all, he wanted his readers to be open-minded when confronted with cultural and other differences in the Americas. Fueled by his comparative global perspective on politics, economics, and science, he used his writing to support Latin American independence and condemn slavery and other forms of colonial exploitation. It is these voluminous and innovative writings on the New World that made Humboldt the undisputed father of modern geography, early American studies, transatlantic cultural history, and environmental studies. This two-volume critical edition--the third installment in the Alexander von Humboldt in English series--is based on the full text, including all footnotes, tables, and maps, of the second, revised French edition of Essai politique sur le royaume de de Nouvelle Espagne from 1825 to 1827, which has never been translated into English before. Extensive annotations and full-color atlases are available on the series website.
If the item details above aren’t accurate or complete, we want to know about it. Report incorrect product info.