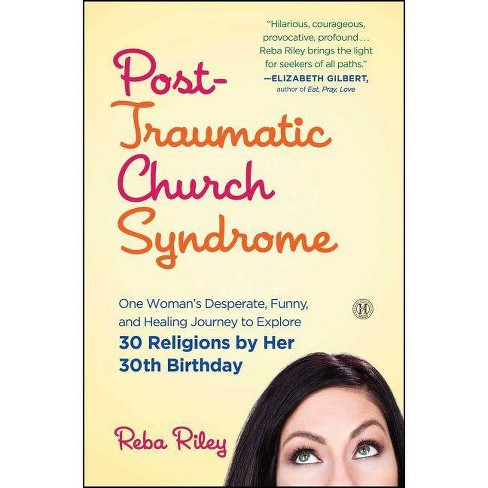 $11.89
MSRP$16.99
0 out of 5 stars with 0 reviews
be the first!be the first! ratings
Shipping
Free standard shipping with RedCard
Help us improve this page

Written with humor and personality, this debut memoir recounts a woman's spiritual quest of experiencing thirty religions before her thirtieth birthday. Post-Traumatic Church Syndrome is for questioners, doubters, misfits, and seekers of all faiths, and tackles the universal struggle to heal what life has broken. On her twenty-ninth birthday, while guests were arriving downstairs, Reba Riley was supposedly upstairs getting dressed. In actuality, she was slumped on the floor sobbing about everything from the meaning of life to the pile of dirty laundry on the floor. Life without God was crashing in on her. And she was sick and tired of feeling sick and tired. She uttered a desperate prayer, and then the idea came to her--thirty by thirty. And thus she embarked on a year-long quest to experience thirty religions by her thirtieth birthday. During her spiritual sojourn, Riley: -Was interrogated about her sex life by Amish grandmothers -Disco danced in a Buddhist temple -Fasted for thirty days without food--or wine -Washed her lady parts in a mosque bathroom -Was audited by Scientologists -Learned to meditate with an urban monk -Snuck into a Yom Kippur service with a fake grandpa in tow -And finally discovered she didn't have to choose a religion to choose God In a debut memoir that is funny and earnest, Riley invites questioners, doubters, misfits, and curious believers to participate in the universal search to heal what life has broken. Post-Traumatic Church Syndrome takes you by the hand and reminds you that sometimes you first have to be lost in order to be found.
If the item details above aren’t accurate or complete, we want to know about it. Report incorrect product info.