Power of Sprinkles : A Cake Book by the Founder of Flour Shop - by Amirah Kassem (Hardcover) 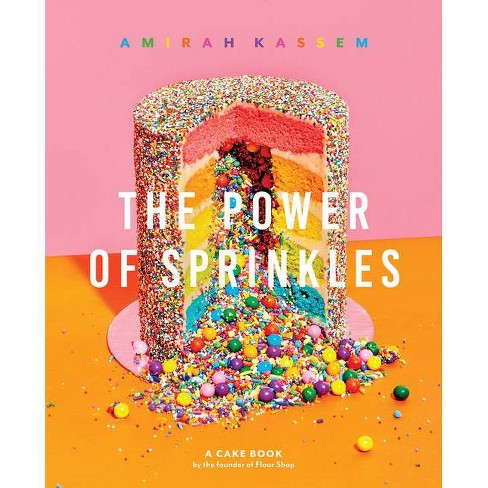 Flour Shop's rainbow explosion cakes have become an international sensation! And now, with The Power of Sprinkles, Flour Shop Founder Amirah Kassem reveals the secrets to making her magical cakes at home.

Amirah Kassem preaches the power of sprinkles in her wildly creative first book. A modern-day Willy Wonka, Kassem reminds readers that joy can be found in creating something delightful and delicious, that baking a cake for someone is the best thing in the world, and that, when it comes to cake decorating, any mistake can be covered in sprinkles (and everyone will love it anyway!).

With twenty-nine different cakes--from unicorn cakes and donut cakes to cakes that look like reindeer, popcorn, spaghetti, and avocado toast--and packed with photographs, illustrations, and infinite ideas, The Power of Sprinkles is a book for bakers and cake decorators at every age and level.

"Kassem's first cookbook is stylish and incredibly colorful, with cake recipes practically made for Instagram."--Food & Wine Magazine "Amirah Kassem is one of the few figures in the food industry who can get the fashion set to eat their carbs."--Vogue "The Power of Sprinkles is a decadent, delicious, gorgeous, sparkly delight . . . just like Amirah herself!"--Kelly Ripa "Amirah is fun and amazing and makes the best cakes that always put smiles on people's faces!"--Eloise Eisner "nine years old " "I prefer buying to baking but if you rock with butter, flour and sugar Amirah will show you how to rock with unicorns and rainbows! She's full of sweet surprises."--Rachael Ray "The cakes at Flour Shop in Soho, which was founded by baker Amirah Kassem, are known to be a little audacious. Kassem's cakes are pure rainbow joy. The outside is covered in rainbow sprinkles, each layer of the cake is a color of the rainbow, and the "explosion" cake gushes with rainbow sprinkles when you cut into it. These treats are reserved for those dessert fanatics among us who lead double lives as unicorns."--Food & Wine

Inspired by the piñatas of her childhood, Amirah Kassem sought to create a cake that burst with sprinkles and candy when she cut into it. Her food-based installations have been exhibited everywhere from private settings at the Whitney Museum to 64-foot edible hallways at the Brooklyn Museum, while her fondant-free creations have also caught the attention of Vogue, Harper's Bazaar, and her Cara the Unicorn creation was named Instagram's "2017 Trend of the Year." She opened her first brick-and-mortar store in 2017, and has appeared on the Food Network, the Rachael Ray Show, and Late Night with Seth Meyers.
If the item details above aren’t accurate or complete, we want to know about it.

How It Works: Rocket - by Amelia Hepworth (Board Book)

Bake a Rainbow Cake! - by Amirah Kassem (Board Book)

Suee and the Shadow - by Ginger Ly

1 out of 5 stars
Would not recommend
C Diaz - 2 years ago
I was excited to get this book once I received it I was disappointed it doesn’t have that many recipes and the ones it has I feel like they talk about the same thing it’s really basic for me . The recipes that it has it only talks about Colorful cake buns with sprinkles and sprinkles on the inside and it only has one frosting recipe it’s a cream cheese frosting  .
5 guests found this review helpful. Did you?