Praying with the Enemy - by Steven T Collis (Hardcover) 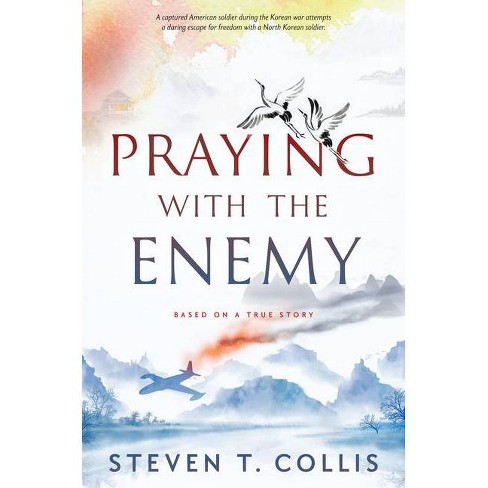 Based on the true story of an American POW during the Korean War and a North Korean soldier who become unlikely allies united in their shared faith in God during a daring escape to freedom.


When his jet malfunctions, Captain Ward Millar makes a last-second decision to eject over enemy territory in North Korea before his plane explodes. His parachute barely opens before impact, saving his life, but the hard landing snaps both of his ankles. Unable to walk, Captain Millar is easily captured by North Korean and Chinese soldiers. His captors interrogate, threaten, and starve him in an attempt to extract strategic wartime information.

He stalls the inevitable by feeding the enemy false information, but it's only a matter of time before they discover his lies. Millar plots a bold, seemingly impossible plan to escape. He knows it will take a miracle to pull it off, but he's not sure if praying to a higher power would even work. He wishes he had faith like his wife, whose firm belief in God can move mountains.

When Barbara Millar receives a telegram informing her that her husband is missing in action behind enemy lines, her family and friends accept the grim reality that Ward is almost certainly dead. Yet Barbara, a woman of deep and sustaining faith, refuses to believe it. She still feels his presence and their connection as strongly as ever. She is certain her husband will return, but she doesn't know how the war and his ordeal might have changed him.

North Korean soldier Kim Jae Pil was raised to believe in the power of prayer, but because the Communist Party kills or imprisons any religious group they perceive as a threat to their power and influence, Kim and his family must keep their Christian faith secret. He has been anxious to return to his family and then escape across the border to South Korea.

With Millar still imprisoned and unable to walk, and the North Korean army becoming increasingly suspicious of Kim's actions, it seems impossible that either man will find the freedom they so desperately desire. But when these wartime foes cross paths, they find in each other an unlikely ally. Despite speaking different languages, Millar and Kim find common ground in their fragile faith and must rely on each other to undertake a daring escape.

Praying with the Enemy is a story of courage, determination, unlikely friendship, and enduring faith.

"In his first novel, nonfiction writer Collis (The Immortals, 2021) triumphantly delivers a mesmerizing story of faith and survival during the Korean War, instantly establishing himself as a literary force in historical fiction. His compassion and gritty realism bring a remarkably fresh voice to wartime inspiration as his characters grapple with the notion of God's purpose amid gripping and sometimes graphic horrors of war. Based on true events, Praying with the Enemy features a sensitive and nuanced range of emotions, granting this well-researched historical and tactical novel satisfying depth."-- "Booklist, starred review"

Steven T. Collis a law professor at the University of Texas at Austin, founding director of the school's religious freedom clinic, and founding faculty director of Texas's Bech-Laughlin First Amendment Center. He received an MFA in creative writing from Virginia Commonwealth University, and graduated from the University of Michigan Law School. He is the author of the nonfiction titles Deep Conviction: True Stories of Ordinary Americans Fighting for the Freedom to Live Their Beliefs and The Immortals: The World War II Story of Five Fearless Heroes, the Sinking of the Dorchester, and an Awe-Inspiring Rescue. He and his wife are parents to four children.
If the item details above aren’t accurate or complete, we want to know about it. Report incorrect product info.