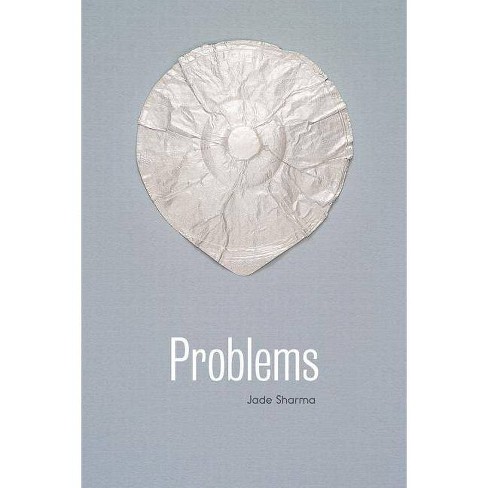 "Maya is not polite, and although I found her captivating and charming, Sharma's goal is not to make her likable. Maya is as horrible, and as fully human, as men in literature have always been allowed to be." --New York Times Sunday Book Review

"Sharma's lucid intelligence makes this story of the death throes of a marriage between a junkie and an alcoholic impossible to get out of your mind." --Vulture

"Debut novelist Jade Sharma writes in a voice that is equal parts irreverent and hilarious, depressive and hopeful, and Problems was by far one of the most interesting and uncommon books I read this year." --Bustle

"With searing honesty and an unflinching gaze, Sharma brilliantly dismantles the brittle structures that so many young women today have built around themselves in the hopes that eventually the interior will match what's on the outside." --Nylon

"Sharma's debut is an uncompromising and unforgettable depiction of the corrosive loop of addiction, and with Maya, she has crafted a momentous and painfully honest voice."--Publishers Weekly, Best Books of 2016

"Sharma's debut novel is an uncompromising and unforgettable depiction of the corrosive loop of addiction. . . . there is a propulsive energy in Maya's story, guided by her askew yet precise perspective . . . in Maya's voice, Sharma has crafted a momentous force that never flags and feels painfully honest." --Publishers Weekly, starred review

"The novel is written so well that the relentless and destructive rhythm of heroin abuse seems calming, metaphysical, and occasionally even funny. Sharma's descriptions are vivid and sage . . . lulling readers into a similarly opiate state to which they will readily succumb and from which, like the protagonist, it will take some time to recover. An absorbing novel carried by a seemingly hopeless protagonist you will want to befriend and save." --Kirkus

"Sharma laces her prose with a particularly strong strain of dark humor, leaving elegant signatures on every page with the abandon of a drunk hostess who's been handed a blank prescription pad, granted immunity, and charged with a divine imperative to make sure everyone has a good time."--The Rumpus
"Maya's inner world is raw and repulsive, but astutely rendered by Sharma. The book is simultaneously hard to read and hard to put down." --Publishers Weekly

"[Maya's] problems could fill a book -- and in fact, they do, in a brisk, mordantly funny, fragmented narrative that is refreshingly honest, despite the fact that Maya is a liar." --Los Angeles Times

"[Maya is] by turns raunchy, clever, spunky, sage, funny and forlorn as she barrels through the vicissitudes of a life of addiction grasping for an escape hatch--such a fresh voice that we can't help but hope she finds one. . . . Jade Sharma's debut novel of a young New York City junkie is on the money, harrowing, perspicacious, funny and somehow still uplifting." --Shelf Awareness

"Problems, told in fragments of Maya's thoughts, avoids the clichï¿½s of addition and recovery narratives to speak to something dark, hilarious and deeply real."--Autostraddle

"Jade Sharma's debut is a darkly funny character study of an unhappy yet witty-as-hell woman whose self-destructive streak is as appalling as it is somehow understandable. Problems challenges readers to forget traditional redemption stories and yet to still find empathy for the messiest of heroines."--Esquire

"Problems tells Maya's story of heroin abuse, personal flailing and recovery in raw, razor-sharp prose, painting an unromanticized yet witty and profound portrait of addiction."--Huffington Post ." . . a rather tender novel in places, without being sentimental . . ." --Spectator "Maya's complex blend of vulnerability and ennui is enthralling, and her abiding fascination with bodies--sex, sensations, shortcomings--keeps her commentary lively even as her life careens out of control. Given such diversions, it's perhaps easy to miss the big picture: the invitation that Sharma is extending to readers to reimagine the possibilities for what a 'heroin novel' can be." --Critical Mass

"The end of Problems presents a glimmer of hope that she may finally be able to crawl out of it and evolve into the person she wants to be." --Star Tribune

"Raw, unrepentant, and biting with dark humor, Problems turns the addiction-redemption narrative inside out, as Sharma follows heroin hobbyist Maya through her increasingly chaotic life after both the end of her marriage and an affair." --Poets and Writers

"The problem with Jade Sharma's novel, Problems, is that it ends. The narrator, Maya, is a hot mess with zero percent of her shit together, and yet as I got to know her through the Sharma's inventive narrative voice, I saw her as--or perhaps wanted her to be--my friend." --The Rumpus

"Maya's reflections on being Indian American when 'the whole world wants young white girls' do more to show the damage of internalized white supremacy than many of today's internet-published hot takes." --Bitch Magazine

"Problems is a book that wrestles with you; you will try to put it down but you'll be unsuccessful. And when you finish reading, it will feel like a masochistic act. But like any great character, Maya will linger with you, so you can struggle together."--Bust

"Maya, with her bodily neuroses and impulses and lusts and bolts of cleverly crafted philosophical insight, is the novel. And she's hard to stop watching and caring about and even, optimistically, rooting for. . . . A psychologically astute portrait of a woman's cycle of addiction, the ebb and flow of her life around it, and her own hilarious, bittersweet and brilliant inner monologue through it all." --Huffington Post

"Problems unnerves in its facility to careen between acidic humor and frank depictions of desperation, as well as in its refusal to disavow completely the allure of the high."--Literary Hub "Problems is a book that demands to be read in a gulp from its first sentence..."--The Bookends Review "It's simultaneously hilarious, sexy, and heartbreaking." --Bustle

"I love how raw this book is. It's very stream of consciousness, and it's told with a mordant sense of humor too." --Word of Mouth

"[Problems is] complex and unflinching, but it's among those messy ruins of her self-made life that I found myself feeling oddly and genuinely uplifted." --Guernica

"Jade Sharma's great gift is in how she makes the reader addicted to the addict." --Independent "Problems is, indeed, a funny book, but it's hardly a comedy. It is brutal, sarcastic, often startling in its depictions of sex, sex work, drug use, and disordered eating habits - but these highlight rather than distract from the deep vulnerability at its core." --New Statesman "Problems is filled with sharp dialogue, perfectly crafted one-liners and succinct observations..." --The Guardian "There's very little ease to start in Problems, a debut novel about addiction from the deceptively sober perspective of a bona fide anti-heroine." --Bookforum

"Jade Sharma's Problems is one of the year's strongest debut novels, a powerful book that deals with addiction and gender politics through the eyes of its unforgettable and vividly drawn protagonist." --Largehearted Boy

"First out of the gate for the new venture is the utterly ambitious and unique Problems, a debut novel from Jade Sharma that offers a disturbing, but also humorous, glimpse into heroin addiction and the end of a crumbling marriage. . . . Thanks to Sharma's quick, episodic style, Maya's fall from grace blisters off the page. It's electric writing." --Brooklyn Magazine,

"Bold and honest, Problems is a fresh look at recovery, redemption, and one woman's increasing nest of problems." --Buzzfeed

"Few debuts manage to be as forceful and commanding as this one." --Rain Taxi

"Believe it or not, it is possible to infuse a bit of wit into a novel about heroin addiction." --StyleCaster

"Unsettling, aware, self-conscious, vivid, honest, gorgeous - Problems does it all, all while eschewing traditional expectations of story, plot, and character." --Vol. 1 Brooklyn

"Problems isn't your typical addiction story, because it isn't your typical narrator, written by someone who blows the usual heroin narratives out of the water. Sentence by sentence, it coils around you, then tightens. It's a compulsively readable trap." --The Fanzine

"Sharma gives us Maya, a fresh voice. She's vulgar, she's funny, she's bold, bawdy, insightful, and she has the voice of a woman, a twist to the usual heroin-narrative with thoughts and worries that are unique to women and to a woman's experience with addiction." --NewPages

"It's a darkly funny tale of addiction, recovery, and redemption for every person, whether they're "likeable" or not. . . . Problems drags its readers so deep into Maya's psyche that you can't help but feel her self-consciousness, addiction, and pain." --Fusion

"Jade Sharma's Problems is one of the year's strongest debut novels, a powerful book that deals with addiction and gender politics through the eyes of its unforgettable and vividly drawn protagonist." --Largehearted Boy

"Problems is a book that wrestles with you; you will try to put it down but you'll be unsuccessful. And when you finish reading, it will feel like a masochistic act. But like any great character, Maya will linger with you, so you can struggle together." -- Bust

"'Somewhere along the way, there stopped being new days, ' reads the first sentence, and the book's structure echoes this repetitive flow of time, largely eschewing chapters and page breaks and instead allowing its narrative to develop through a series of short paragraphs. The result is a novel that carries the reader along with its protagonist on her uneven journey, making every descent along the way seem even more avoidable in hindsight." --Google Play

"Jade Sharma is the appalling, hilarious love child of Denis Johnson and Maggie Estep, and Problems is as unrepentant and transgressive a novel as they come. Every coming-of-age story except this one is a lie."--Elisa Albert

"The self-degrading, self-knowing narrator of Jade Sharma's Problems dares to recount her beyond messy life in clean, lucid--and often funny--prose. She'd never be so glib as to call herself a survivor, but even at this dark novel's darkest moments her voice itself makes the case for her resilience and her humanity." --David Gates

"Problems unnerves in its facility to careen between acidic humor and frank depictions of desperation, as well as in its refusal to disavow completely the allure of the high." --Literary Hub
If the item details above aren’t accurate or complete, we want to know about it. Report incorrect product info.