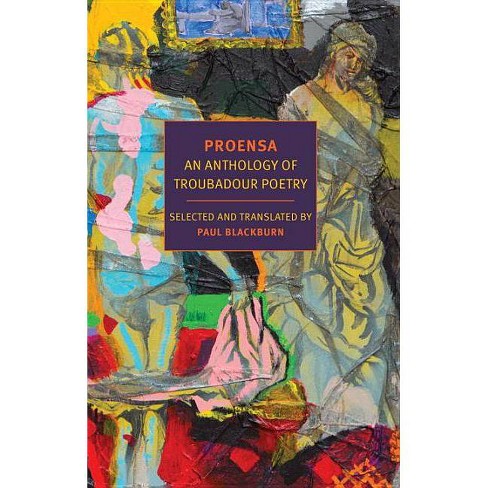 "The poetry of the ProvenCal troubadours has had a profound influence on the development of the lyric, from Dante and Petrarch to Ezra Pound and the Black Mountain poets, despite the difficulty of Old ProvenCal, or Occitan, the original language of the troubadours. The renewed interest of the English-speaking world in troubadour poetry was initiated in the early twentieth century by Pound's criticism and translations of the troubadours. Yet no poet writing in English has done more for this body of work than the American poet and translator Paul Blackburn, who devoted more than twenty years to the study and translation of occitan ancien. Proensa is the result of that long commitment, an anthology of thirty troubadour poets of the eleventh through thirteenth centuries. It is a dexterous and spirited work of translation, which, as George Economou writes in his introduction, "will take its place among Gavin Douglas' Aeneid, Golding's Metamorphoses, the Homer of Chapman, Pope, and Lattimore, Waley's Japanese, and Pound's Chinese, Italian, and Old English.""--

It was out of medieval Provence--Proensa--that the ethos of courtly love emerged, and it was in the poetry of the Provençal troubadours that it found its perfect expression. Their poetry was also a central inspiration for Dante and his Italian contemporaries, propagators of the modern vernacular lyric, and seven centuries later it was no less important to the modernist Ezra Pound. These poems, a source to which poetry has returned again and again in search of renewal, are subtle, startling, earthy, erotic, and supremely musical. The poet Paul Blackburn studied and translated the troubadours for twenty years, and the result of that long commitment is Proensa, an anthology of thirty poets of the eleventh through thirteenth centuries, which has since established itself not only as a powerful and faithful work of translation but as a work of poetry in its own right. Blackburn's Proensa, George Economou writes, "will take its place among Gavin Douglas' Aeneid, Golding's Metamorphoses, the Homer of Chapman, Pope, and Lattimore, Waley's Japanese, and Pound's Chinese, Italian, and Old English."

"Shortly after Proensa was first published by Robert Creeley in Mallorca in 1953, Paul Blackburn wrote his own best definition of these songs: 'To give / and man enough to receive, LOVE, / when he finds it offered. / To take the sun and the goods of earth, while it lasts.' Over sixty years later his voicings of the troubadours still ring fresh--leaping with joy, sorrowing with duende." --Richard Sieburth "Blackburn's forgotten translation of Troubadour poets, Proensa, is a testament to translation as a test of truth...never did strings plucked at such a distance reverberate so closely."--Paul Pines, Big Bridge "Blackburn has skillfully incorporated musical elements and also 'high' diction and syntax...a great translation."--Stephen Fredman, Chicago Review "Spare, modern, and abstract without violating the artistic intricacy of the original...Proensa is a boon to those who will never experience the pleasure of studying the troubadours in their original accents but who now can appreciate their complex beauty in Paul Blackburn's dense dynamic re-creations."--Patricia Harris, Romance Philology

Paul Blackburn (1926-1971) was born in St. Albans, Vermont, the son of the poet and children's book author Frances Frost. When he was fourteen he moved from Vermont to Greenwich Village, later spending a year at New York University before enlisting in the army. After his military service he transferred to the University of Wisconsin at Madison, where he studied Old Provençal and began a correspondence with Ezra Pound. Through Pound he became friends with Robert Creeley and was introduced to many in Creeley's circle. In 1954 Blackburn received a Fulbright to study Provençal literature in the south of France and it was there he embarked on the project that would become Proensa. Back in New York, he continued to write and publish poetry while working various jobs, including printing-house clerk and encyclopedia-entry writer, and running a reading series that would become the legendary Poetry Project at St. Mark's in the Bowery. He was known for encouraging the work of the young poets who later rose to prominence as members of the New York School and the Beats. By the mid-1960s, Blackburn had become recognized enough to take on traditional teaching jobs, and in 1967 received a Guggenheim Fellowship, which allowed him to live in Europe and concentrate on his own work. In all he published thirteen books of poetry and five translations, including works by El Cid, Pablo Picasso, Federico García Lorca, and Julio Cortázar. The final version of Proensa was published in 1978 seven years after Blackburn's death from esophageal cancer. George Economou taught English and comparative literature at Long Island University and the University of Oklahoma for forty-one years. He has published twenty-one books of poetry, translations, and criticism.
If the item details above aren’t accurate or complete, we want to know about it. Report incorrect product info.