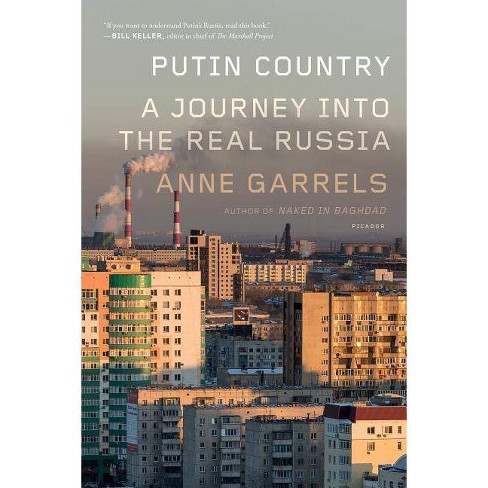 "A revealing look into the lives of ordinary Russians. More than twenty years ago, the longtime NPR correspondent Anne Garrels began to visit the region of Chelyabinsk, an aging military-industrial center a thousand miles east of Moscow that is home to the Russian nuclear program. Her goal was to chart the social and political aftershocks of the USSR's collapse. On her trips to an area once closed to the West, Garrels discovered a populace for whom the new democratic freedoms were as traumatic as they were delightful. The region suffered a severe economic crisis in the early 1990s, and the next twenty years would only bring more turmoil as well as a growing identity crisis and antagonism toward foreigners. The city of Chelyabinsk became richer and more cosmopolitan, even as corruption and intolerance grew more entrenched. In Putin Country, Garrels crafts a necessary portrait of the nation's heartland. We meet upwardly mobile professionals, impassioned activists, and ostentatious mafiosi. We discover surprising subcultures, such as a vibrant underground gay community and a group of determined evangelicals. And we watch doctors and teachers try to cope with a corrupt system. Drawing on these encounters, Garrels explains why Vladimir Putin commands the loyalty of so many Russians, even those who decry the abuses of power they encounter from day to day. Her portrait of Russia's silent majority is both essential and engaging reading at a time when Cold War tensions are resurgent"--Publisher's online catalog.

More than twenty years ago, the NPR correspondent Anne Garrels first visited Chelyabinsk, a gritty military-industrial center a thousand miles east of Moscow. The longtime home of the Soviet nuclear program, the Chelyabinsk region contained beautiful lakes, shuttered factories, mysterious closed cities, and some of the most polluted places on earth. Garrels's goal was to chart the aftershocks of the U.S.S.R.'s collapse by traveling to Russia's heartland.
Returning again and again, Garrels found that the area's new freedoms and opportunities were exciting but also traumatic. As the economic collapse of the early 1990s abated, the city of Chelyabinsk became richer and more cosmopolitan, even as official corruption and intolerance for minorities grew more entrenched. Sushi restaurants proliferated; so did shakedowns. In the neighboring countryside, villages crumbled into the ground. Far from the glitz of Moscow, the people of Chelyabinsk were working out their country's destiny, person by person.
In Putin Country, Garrels crafts an intimate portrait of Middle Russia. We meet upwardly mobile professionals, impassioned activists who champion the rights of orphans and disabled children, and ostentatious mafiosi. We discover surprising subcultures, such as a vibrant underground gay community and a circle of determined Protestant evangelicals. And we watch doctors and teachers trying to cope with inescapable payoffs and institutionalized negligence. As Vladimir Putin tightens his grip on power and war in Ukraine leads to Western sanctions and a lower standard of living, the local population mingles belligerent nationalism with a deep ambivalence about their country's direction. Through it all, Garrels sympathetically charts an ongoing identity crisis. In the aftermath of the Soviet Union, what is Russia? What kind of pride and cohesion can it offer? Drawing on close friendships sustained over many years, Garrels explains why Putin commands the loyalty of so many Russians, even those who decry the abuses of power they regularly encounter.
Correcting the misconceptions of Putin's supporters and critics alike, Garrels's portrait of Russia's silent majority is both essential and engaging reading at a time when cold war tensions are resurgent.

Quiet but excellent . . . [Garrels's] clear, patient, sympathetic portraits of teachers, children, prostitutes, doctors--the whole raft of Russian humanity--provide a pointillist landscape and an understanding of the country, and its mentalities, that eludes many more overtly political books. --The New Yorker

A quiet masterwork . . . [Garrels] seems to have talked to everyone . . . She marshals her reporting, character after character, to build the evidence. --Andrew Meier, Bookforum Although the nominal subject of Putin Country is Chelyabinsk . . . the book's deeper and more revelatory theme is that of the Russian wily man . . . There is little remarkable about the place, though that is also what makes the book worthwhile . . . The search for a post-Soviet ideology has, in Chelyabinsk and across Russia, led to a strange mishmash, at once faithful and mystical, distrustful and fatalistic. --Joshua Yaffa, The Wall Street Journal Deeply informative . . . [Garrels] directs her considerable energy to people, not policy, and her readers are the better for it . . . With the clear eye of a good reporter, she could sometimes see dramatic improvements--and at other times, disappointing setbacks. She made many friends and, through her, so do we. --Marvin Kalb, Democracy: A Journal of Ideas Fluent in Russian, Garrels has needed no translator and developed over the years many connections in the region. She tries to be hopeful, but for her fellow Russophiles (I count myself one), Putin Country is devastating . . . Garrels keeps her cool and listens quietly as she gathers locals' narratives and opinions, no matter how disturbing . . . Two of the best chapters, "The Taxi Driver" and "The Forensic Expert," are like nonfictional short stories, wherein we become familiar with the long arcs of the protagonists' tumultuous lives. --Bob Blaisdell, The Christian Science Monitor If you want to understand Putin's Russia, read this book. Anne Garrels burrows deep into the heartland and enlists a diverse cast of authentic Russians to show why Putin happened, how he remains popular, and what might threaten his hold on power. --Bill Keller, editor in chief of The Marshall Project More than twenty years ago, Anne Garrels began visiting the formerly 'secret' city of Chelyabinsk, closed to foreigners because of its military and industrial installations. Like the miners in that long-suffering city, she dug deep into the lives of the people and she kept going back to talk with them, charting their evolution from Soviet citizens to citizens of a new Russia. With great journalistic skill, Garrels helps us understand the complex emotions of people still in transition, trying to define what it means to be Russian. --Jill Dougherty, former CNN foreign affairs correspondent Putin Country is brilliant storytelling. Save yourself a trip to Chelyabinsk--Anne Garrels gives you the grime and glitz, the hangovers and heartbreak, of today's Russia, and all without a visa! --Stephen Sestanovich, author of Maximalist: America in the World from Truman to Obama and U.S. ambassador-at-large to the former Soviet Union, 1997-2001 Anne Garrels's gripping account of people in Russia's heartland is a fascinating book. It shows us a different Russia from the one most observers see in Moscow and St. Petersburg. It is essential reading for those who wish to understand Putin's Russia. --Jack F. Matlock, Jr., author of Reagan and Gorbachev: How the Cold War Ended and U.S. ambassador to the Soviet Union, 1987-1991 A critical and crucial study of a country with which America has always had a volatile connection, Garrels's essays cover vital ground and are essential reading for anyone who wishes to understand the myriad issues that inform U.S.-Russian relations. --Carol Haggas, Booklist (starred) Former NPR foreign correspondent Garrels offers finely delineated, meticulously researched dispatches from a region in Russia that seemed to her both typical of a certain Russian provincialism and arbitrarily chosen: Chelyabinsk, on the southern edge of the Ural Mountains . . . In essence, Garrels shows how the gloomy sense of 'Russian fatalism' poisons all aspects of society. A collection of scrupulous, timely journalistic portraits. --Kirkus Reviews While Garrels takes pain to include voices willing to condemn Putin's administration in her exposé, most of the interviewees are either unaware of, or willfully blind to, the worst of their government. This book persuasively asserts that too little has changed in Russia since the days of the Soviet Union. --Publishers Weekly

Anne Garrels is a former foreign correspondent for NPR and the author of Naked in Baghdad. She was awarded the Courage in Journalism Award by the International Women's Media Foundation in 2003 and the George Polk Award for Radio Reporting in 2004.
If the item details above aren’t accurate or complete, we want to know about it. Report incorrect product info.