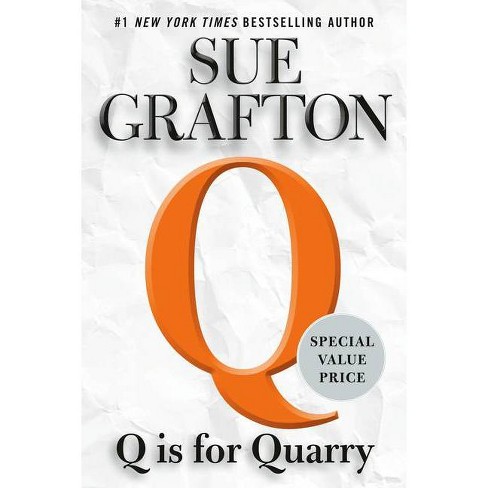 Our #1 New York Times bestselling series. Back in 1969, young people were hitting the road. More than one of them wound up dead-including the girl in daisy-patterned pants who was found in a quarry off Highway 1, the victim of multiple stab wounds. Eighteen years later, she's still a Jane Doe-and the cops who found her are still haunted by the case. Anxious to solve it, but no longer in their prime, they turn to Kinsey Millhone for help. But this ice-cold case heats up more quickly than they expected.

Q Is for Quarry provides more insight into the detective's convoluted family relationships than any of Grafton's previous novels, and it's a cracking good story, as well. --Bookpage

Grafton weaves an intriguing story, convincing in detail and satisfying in development. Still, what lifts this above the crowd is the character of her protagonist, Kinsey Millhone, who rings true both as a detective and as a woman. --The San Diego Tribune

Starring affable private eye Kinsey Milhone, Q is quintessential Grafton. It is so well-written that many readers might consider it one of her best. --USA Today

Sue Grafton first introduced Kinsey Millhone in the Alphabet Series in 1982 and since then, both writer and heroine have become icons and international bestsellers. Ms. Grafton was a writer who consistently broke the bonds of genre while never writing the same book twice. Named a Grand Master by the Mystery Writers of America, her awards and honors include the Lifetime Achievement Award from the Private Eye Writers of America, the Ross Macdonald Literary Award, the Cartier Diamond Dagger Award from Britain's Crime Writers' Association, the Lifetime Achievement Award from Malice Domestic, three Shamus Awards, three Anthony Awards, a Lifetime Achievement Award from Bouchercon, and the Ross Macdonald Literary Award. She died in 2017.
If the item details above aren’t accurate or complete, we want to know about it. Report incorrect product info.