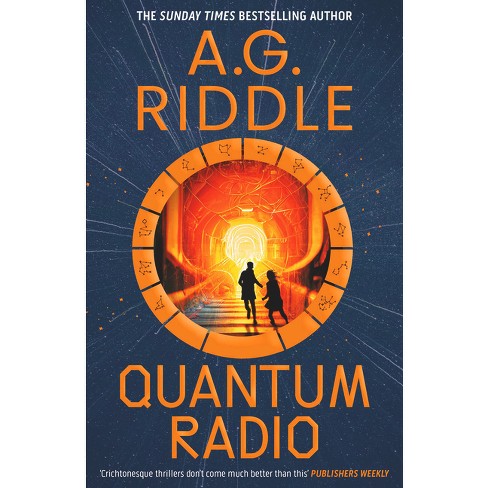 FROM THE SUNDAY TIMES BESTSELLING AUTHOR OF LOST IN TIME At CERN, a scientist has just made an incredible discovery - a breakthrough that may answer the deepest questions about human existence. But what he's found is far more dangerous than he ever imagined. Dr. Tyson Klein is a quantum physicist who has dedicated his entire life to his research. At CERN, he analyses data generated by the Large Hadron Collider, the world's biggest and most powerful particle accelerator. Now, Ty believes he's found a pattern in its output. It looks like an organised data stream, being broadcast over what he calls a quantum radio. Could it be a signal from another universe? A message sent from the future? Or something else entirely? As Ty peels back the layers of his discovery, he learns that what he's found isn't what he thought it was. The encoded message is far more profound. It may alter our understanding of human existence and the universe. But Ty is not the only one looking for it. Someone has been following his research for a long time. And they'll do anything to prevent him from unravelling what is being broadcast by the quantum radio... Because the first one to discover the truth may well control the future.

"Thoughtful explorations of alternate history, especially surrounding WWII, take center stage." --Publishers Weekly "Clever historical twists are used to imagine how an Axis victory might have brought World War II to a very different conclusion. . . . A tense novel in which scientists race against time to help humanity determine its own destiny." --Foreword Reviews "Love, murder, betrayal, multiple universes and dinosaurs - amazing! One of the twistiest time-tales I've ever read." --Diana Gabaldon on Lost in Time "Crichtonesque thrillers don't come much better than this intricate outing from Riddle (The Extinction Trials), which combines a fantastic premise--a time-travel device known as Absolom is used to imprison dangerous criminals in the prehistoric past--with a closed-circle whodunit. . . . Riddle keeps the twists coming, including a mind-bending jaw-dropper that sets up the book's second half. By creating sympathetic and complex characters, the author makes suspending disbelief easy. Readers won't be able to turn the pages fast enough." --Publishers Weekly on Lost in Time

A.G. Riddle spent ten years starting and running internet companies before retiring to focus on his true passion: writing fiction. He is now an Amazon and Wall Street Journal bestselling author with nearly five million copies sold worldwide in twenty languages. He lives in North Carolina. Visit www.agriddle.com
If the item details above aren’t accurate or complete, we want to know about it.

Lost in Time - by A G Riddle (Hardcover)

The Ark - by Christopher Coates

Lost in Time - by A G Riddle

The Kissing of Kissing - (Multiverse) by Hannah Emerson (Paperback)

Glenlock - (The Riddle of the Storm) by R L Snyder (Paperback)