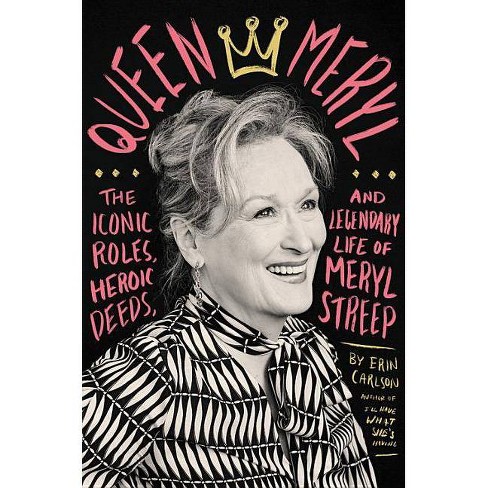 A captivating and inspiring portrait of legendary actress Meryl Streep and her work, Queen Meryl explores the fearless icon's trailblazing roles in film, her feminist activism, and the indelible mark she's left on pop culture.

A captivating and inspiring portrait of legendary actress Meryl Streep and her work, Queen Meryl explores the fearless icon's trailblazing roles in film, her feminist activism, and the indelible mark she's left on pop culture.
Meryl Streep is the most celebrated actress of our time. She's a chameleon who disappears fully into each character she plays. She never tackles the same role twice. Instead, she leverages her rarified platform to channel a range of dynamic, complicated women--Joanna Kramer, Karen Silkwood, Julia Child, Margaret Thatcher, Katharine Graham--rather than limit herself to marginal roles for which other actresses must settle: Supportive Wife. Supportive Mother. Supportive Yet Utterly Disposable Love Interest. Streep will have none of that.
The once-awkward, frizzy-haired suburban teen blossomed into a rising ingénue on the stage at Vassar College and the Yale School of Drama. She came of age during the women's movement of the '60s and '70s, and has worn her activism on her sleeve even when it was unfashionable. When she reached 40, the age when many leading ladies fade away, Streep plunged forward, taking her pick of parts that interested her and winning a pile of awards along the way. Meanwhile, she remained an unlikely box-office draw, her clout even managing to grow with age: The Devil Wears Prada, starring Streep as the Anna Wintour avatar Miranda Priestly, scored $326 million worldwide.
Journalist and author Erin Carlson documents all of Streep's Oscars, accents, causes, memes, friendships, and feuds; also exploring the off-brand forays into action-adventure (The River Wild) and musicals (Mamma Mia!), and how Streep managed to sneak her feminism into each character. In the spirit of nontraditional bestsellers like Notorious RBG and The Tao of Bill Murray, Queen Meryl is illustrated by artist Justin Teodoro and filled with fascinating lists and sidebars, delivering joy in homage to its unique and brilliant subject.

A vibrant celebration of one of Hollywood's most iconic figures.--Bustle.com

All hail!--People, Best New Books of the Week

An enthusiastic homage to a legend.--Kirkus Review

An utterly compelling ride through the rise of one of our most beloved and impactful artists. Carlson deftly dissects the evolution of a self-made icon, and the fascinating stories behind her many, many unforgettable roles. This is a book for film aficionados, Hollywood history fans, and anyone who's ever wondered how Meryl Streep came to be Meryl F*cking Streep.--Kelsey Miller, author of I'll Be There for You: TheOne About Friends

Erin Carlson sheds a new light on one of the most beloved actresses of our times. As she charts Meryl's career and personal life, Carlson manages to make her seem not just regal, but deeply human. Readers will come away with a new appreciation for Queen Meryl and a desire to revisit so many of her greatest roles.--Jennifer Wright, author of It Ended Badly

Fans should be delighted by the juicy details of life on various sets andtales of Streep's good-humored devotion to her craft.--Booklist

Generously supplemented with gossipy sidebars and lists and with fashion magazine-like brush-and-ink drawings, Carlson's latest will be embraced by Streep-struck fans.--Publishers Weekly

With great research and enthusiasm, Carlson writes of Streep's trailblazing roles, activism and impact on pop culture. If you're a fan, you'll want to add this to your pile.--Huffington Post, Books to Read This Fall

You absolutely must read [this] homage to another female force to be reckoned with.--Women.com, Books of the Month

Erin Carlson is the author of I'll Have What She's Having: How Nora Ephron's Three Iconic Films Saved the Romantic Comedy and has covered the entertainment industry for The Hollywood Reporter and the Associated Press. Her work has appeared in Glamour, Fortune, and the Los Angeles Times, and she holds a masters in journalism from Northwestern.
If the item details above aren’t accurate or complete, we want to know about it.

The Joy of Basketball - by Ben Detrick & Andrew Kuo (Hardcover)

The Modern Singhs: The True Story of a Marriage of Two Cultures - by Abbey Singh (Paperback)

When Marilyn Met the Queen - by Michelle Morgan (Hardcover)

The Veil Between Two Worlds - by Christina Vo (Paperback)

I'll Have What She's Having - by Erin Carlson (Paperback)

Hour to Live, an Hour to Love - by Richard Carlson & Kristine Carlson (Hardcover)

What about the Big Stuff? - (Don't Sweat the Small Stuff Series) by Richard Carlson (Hardcover)

5 out of 5 stars
Would recommend
Mary - 2 years ago
AMAZING BOOK!! Love Meryl Streep
Did you find this review helpful?