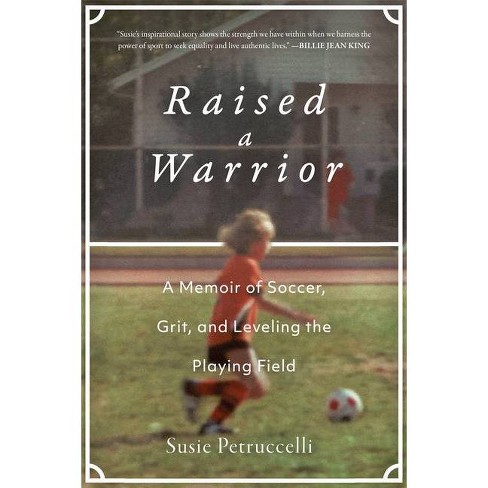 A star athlete shares her trailblazing account of triumph in the face of sexism, self-doubt, and injury, gives a remarkable global tour of the women's soccer world, and presents a stirring call-to-action to secure equal pay and conditions.

When Susie Petruccelli won a place on Harvard University's soccer team, she felt on top of the world--talented, strong, and worthy. Unfortunately, after sustaining injuries and developing health problems, she felt her worth slip away. In this remarkable memoir, Petruccelli reveals how she battled her way back onto the field and continued to fight even after she hung up her cleats. She distills the significance of not giving up on oneself and inspires players of all sports who've faced injuries to persevere. She also brings to light the inequities and discrimination female athletes face that she's traveled the world to see and document firsthand, and introduces the international athletes and activists fighting for equal pay and conditions. In so doing, she reveals the progress made, as well as the battles ahead and the force of the movement.

Raised a Warrior is the winner of the Vikki Orvice Prize and has been praised by a wide range of sports icons from Pelé to Billie Jean King.

"Petruccelli's passion for using her knowledge as a tool to educate others is both heartening and galvanizing. Fans of the sport and the women changing it will be delighted."
--Publishers Weekly

A timely, impactful sports memoir that vividly captures the student-athlete experience and the author's awakening as a women's-sports advocate.
--Booklist

"Susie's inspirational story, full of hard truths, shows the strength we have within when we harness the power of sport to seek equality and live authentic lives."
--Billie Jean King, winner of thirty-nine Grand Slam tennis tournaments, founder of the Women's Tennis Association and the Women's Sports Foundation, member of the International Tennis Hall of Fame and the National Women's Hall of Fame, and recipient of the Presidential Medal of Freedom from President Barack Obama

"A powerful account of women in soccer told by the remarkable Susie Petruccelli. Any player who reads Raised A Warrior will be inspired and there can be no higher accolade than that."
--HRH Prince Ali Bin Al Hussein of Jordan, founder of the Association Football Development Programme (AFDP) Global and the Asian Football Development Project and advocate for women's soccer and social development in Asia

"A passionate and thoughtful account of a young woman struggling to discover who she is in a world that is constantly telling her who she should be."
--Kely Nascimento-Deluca, cofounder of Warrior Women of Football, director of Warriors of a Beautiful Game and The Real Pelé, a film about her father, Brazilian soccer legend Pelé, and ambassador for the Global Goals World Cup

"How we look at gender in sports is changing. Raised A Warrior is going to help shape the narrative of the current movement."
--Donna de Varona, Olympic Gold medalist, first president of the Women's Sports Foundation, chair of the 1999 FIFA Women's World Cup, and consultant to the US Senate on issues related to the Olympics and Title IX of the Equal Education Amendments Act

"Susie courageously tells her story of being part of a team, the sisterhood of sports, the pull to do more, the passion to help others, and all the growth that happens in between life's most wonderful adventures of marriage and kids. By sharing her story, other people will be encouraged to live out their dream as well."
--Julie Foudy, player for the United States Women's National Soccer Team, two-time FIFA Women's World Cup champion, Olympic Gold and Silver medalist, National Soccer Hall of Fame inductee, and former president of the Women's Sports Foundation

"A fun page-turner of a book that I think everyone can relate to."
--Kristine Lilly, player for the United States Women's National Soccer Team, two-time World Cup champion, and Olympic Gold and Silver medalist

"It is an honor to hear that I was a little girl's first soccer hero. It is so important to see and support all players and fans of our beautiful game."
--Pelé

"You would be unwise to challenge Susie on a 50-50 ball, but you would be wise to read her book--an honest and insightful tale of perseverance, both on and off the soccer field."
--Bill Keenan, former professional ice hockey player, screenwriter, and author of Odd Man Rush: A Harvard Kid's Hockey Odyssey from Central Park to Somewhere in Sweden--with Stops Along the Way