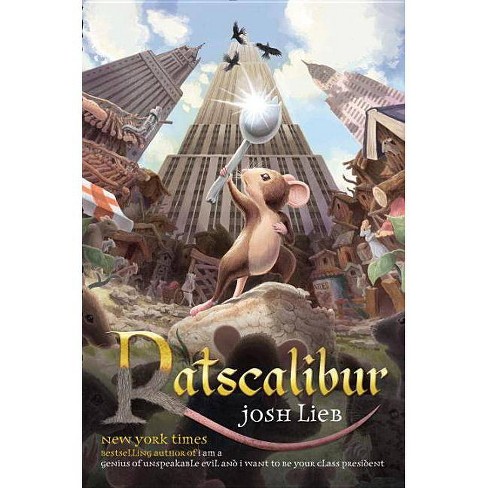 $8.99
0 out of 5 stars with 0 reviews
be the first!be the first! ratings
Shipping
Not available
Help us improve this page

"A witty mash-up of favorite fantasy motifs...Lieb's obvious delight in laying out the vermin-world analogues of sword-and-sorcery staples is infectious. Readers will smile to see Popsicle-stick lances, peanut-shell helmets and, of course, the title sword, which is actually a spork--a spork that must be pulled from a scone. (Pun lovers will find no shortage of reasons to enjoy this book.)"--New York Times Book Review "Lieb gleefully spoofs Arthurian legend [and] Lintern's elegantly drafted pen-and-ink drawings bring additional humor and suspense to the furry underbelly of the cityscape...a charming take on an old favorite."--Publishers Weekly

"Readers will root for Joey and his friends to prevail in this fast-paced and entertaining story about a magical world humans can't see. Short chapters and plenty of action keep the story moving, while Joey's worry and self-doubt make him a well-rounded character...A great choice for those who prefer their unlikely heroes in animal form."--School Library Journal "Full of clever dialogue and hilarious puns, this is a delightful homage to Brian Jacques' Redwall series, Lord of the Rings, and Arthurian legend...Expect more to come from Joey and Ravalon. Perfect for readers who enjoy animal fantasy brushed with humor and charm. Having worked with many of television's comedy greats, Lieb has a strong handle on humor and parody. Don't be surprised if this novel achieves best-seller status like his first."--Booklist "[Josh Lieb] is back with another deliciously clever book...It's a tale full of adventurous knights, suspenseful swordfights and powerful magic (well, the rats have 'ragic)."--EW.com

"Those of you that are re-reading Redwall start to finish for the six thousandth time...this ratty reimagining of the King Arthur tale...promises to be a hoot."--Nerdist.com

"I'm glad Josh Lieb ignored my advice and wrote another book. I may have misjudged him. A man who understands rats can't be all bad." --Daniel Pinkwater

"With swordplay and word play, Josh Lieb's rats-around-the-Roundtable saga is fun on every page. This is fabulous fantasy with an actual bite and hardly any kissing."--Richard Peck, New York Times bestselling author of Secrets at Sea and The Mouse with the Question Mark Tail Praise for Josh Lieb's I Am A Genius of Unspeakable Evil and I Want to Be Your Class President

"If War and Peace had a baby with the The Breakfast Club and then left that baby to be raised by wolves, this book would be the result. I loved it." --Jon Stewart "Josh Lieb is one of the great brave journeys in American literature. Or maybe he just signed my name to a blurb he wrote. Either way, you have to admit he's brave. And the book is hilarious." --Judd Apatow "Beware, kids: Once your parents pick it up, they won't be able to put it down. (Guilty as charged.)" --New York Post "Pitch perfect . . . Every kid who's ever felt put upon, misunderstood, and, let's admit it, infinitely superior to his or her peers will laugh out loud as they enter Oliver's hilarious secret world." --BCCB, starred review "Lieb's creative and twisted first novel gets a positive vote." --Kirkus Reviews "Walter Mitty for teenagers, especially those who do not fit in. They will become huge fans of this book." --VOYA "This is a book that kids will be talking about." --School Library Journal
If the item details above aren’t accurate or complete, we want to know about it. Report incorrect product info.