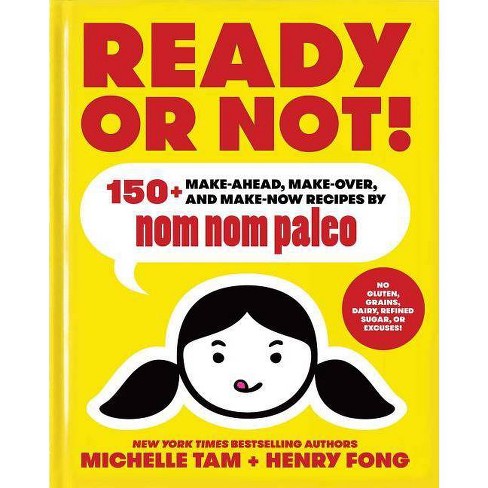 This book focuses on healthy paleo home cooking, no matter if there's time to prepare or just minutes to spare. Whether you're a fastidious planner or a last-minute improviser, you'll find plenty of options, from make-ahead feasts to lightning-fast leftover makeovers. Presented in Nom Nom Paleo's comic book style, the book is organized into color-coded sections to match your readiness level.

Ready or Not, it's a new cookbook from the James Beard award-nominees and New York Times best-selling creators of Nom Nom Paleo, the wildly popular blog, app, and best-selling cookbook! You know how it is: some days, you're fired up and ready to cook; other days, you dread the thought of making dinner. More often than not, you find yourself floating somewhere between inspiration and desperation. What's a crazy busy (but kind of lazy) home cook to do? The answer: pick up this book. Ready or Not makes healthy Paleo home cooking a breeze, no matter if there's time to prepare or just minutes to spare. Whether you're a fastidious planner or a last-minute improviser, you'll find plenty of deliciously nourishing options, from make-ahead feasts to lightning-fast leftover makeovers. Presented in Nom Nom Paleo's deliriously fun comic book style, Ready or Not makes Paleo cooking easy, no matter how much time you have. In fact, this cookbook is organized into color-coded sections to match your readiness level:
Along with colorfully written and gorgeously photographed step-by-step recipes presented in a cheeky cartoon format, Ready or Not features kitchen hacks, Paleo ingredient guides, meal plans, shopping lists and more!

Michelle Tam and Henry Fong are the James Beard Award nominated creators of Nom Nom Paleo, the critically acclaimed website and award-winning cooking app. Their first two cookbooks, Nom Nom Paleo: Food for Humans and Ready or Not! were both New York Times bestsellers.
Dubbed "the Martha Stewart of Paleo" by the New York Times and CBS News, Michelle is the food nerd behind Nom Nom Paleo's recipes and personality. She has a degree in nutrition and food science from the University of California, Berkeley, and earned her doctorate in pharmacy from the University of California, San Francisco. For over a dozen years, she worked the graveyard shift at Stanford Hospital and Clinics as a night pharmacist.
Henry is a lawyer by day but moonlights as the photographer, illustrator, and designer of the Nom Nom Paleo cookbooks, blog, and app. Henry is a graduate of the University of California, Berkeley, and Yale Law School.
Michelle, Henry, and their sons Owen and Oliver split their time between Palo Alto, California, and Portland, Oregon.
If the item details above aren’t accurate or complete, we want to know about it. Report incorrect product info.