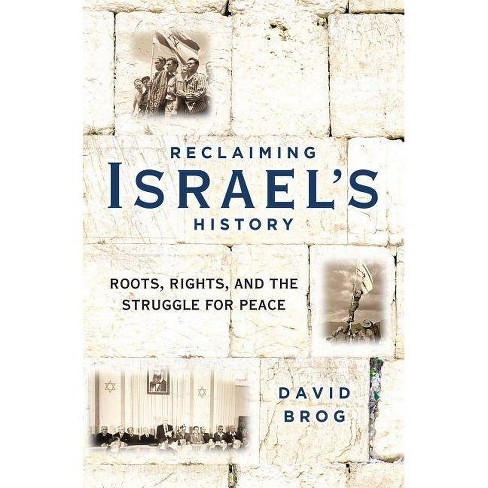 No history is so disputed as the history of Israel. Some see Israel's creation as a dramatic act of justice for the Jewish people. Others insist that it was a crime against Palestine's Arabs. Author David Brog untangles the facts from the myths to reveal the truth about the Arab-Israeli conflict. In Reclaiming Israel's History you'll learn how the Jewish people have maintained a continual presence in the Land of Israel for over 3,000 years--despite centuries of Roman, Byzantine, and Muslim persecution; how the Romans invented the word Palestine as a way to sever the connection between the Jewish people and their land (and how subsequent conquerors doubled down on this strategy); how modern Jewish immigration to Palestine did not displace Arabs but instead sparked an Arab population boom; and the largely untold story of how the leader of Palestine's Arabs collaborated with the Nazis to murder Jews in Europe before they could reach their ancestral homeland. You'll also learn why most of Palestine's Arabs never identified themselves as Palestinians until after the 1967 War; the extraordinary lengths to which Israel's military goes to protect Palestinian civilians (and the high price Israel's soldiers pay for this morality), and how the Palestinians have on separate occasions rejected Israel's offers of a Palestinian state in virtually all of the West Bank and Gaza. Brog frankly admits to Israel's sins both large and small, but notes that in any fair-minded analysis these have been far out- weighed by Israel's commitment to Western values, including freedom, democracy, and human rights. Honest, provocative, and timely, especially given rising anti-Semitism and the aggressive delegitimization of Israel, David Brog's Reclaiming Israel's History is the book for every reader who wants to understand what is really happening in the Middle East.

"This is not the first excellent book on the Middle East conflict. But when listeners to my radio show ask me for one book to read in order to understand the Middle East conflict and Israel's history, this is the book I will recommend. Very few people combine the knowledge, the insight, and the ability to write clearly--for both novice and academic--as does David Brog. I believe that if just a small percentage of Western university students and of the world's Muslims read this book, Israel-hatred will begin to abate, and peace in the Middle East will nally be possible. That is how good it is."
--DENNIS PRAGER, nationally syndicated radio talk show host, New York Times bestselling author, and founder of the Prager University website

"One of the greatest threats to Israel today is the spread of a false narrative claiming that Israel is an oppressor, an occupier, and the obstacle to peace. These lies are dangerous--they inspire terrorists to murder and doom the prospects of peace. David Brog's important new book, Reclaiming Israel's History, tells Israel;s story in a way that dissects and destroys these lies. Anyone interested in defending Israel must read this book."
--PASTOR JOHN HAGEE, founder and chairman, Christians United for Israel

"David Brog is a friend of mine and of Israel, because he is a friend of the truth. He does his homework and lets the chips fall where they may. He's written a history of the State of Israel that tells Israel's inspirational story while thoroughly debunking the most widespread anti-Israel myths. If you are a friend of the truth as well, Reclaiming Israel's History is required reading to effectively defend and stand with Israel. The truth shall set you free."
--GLENN BECK, founder of TheBlaze television network, #1 New York Times bestselling author, and nationally syndicated radio host

The list of Regnery authors reads like a "who's who" of conservative thought, action, and history.
If the item details above aren’t accurate or complete, we want to know about it. Report incorrect product info.