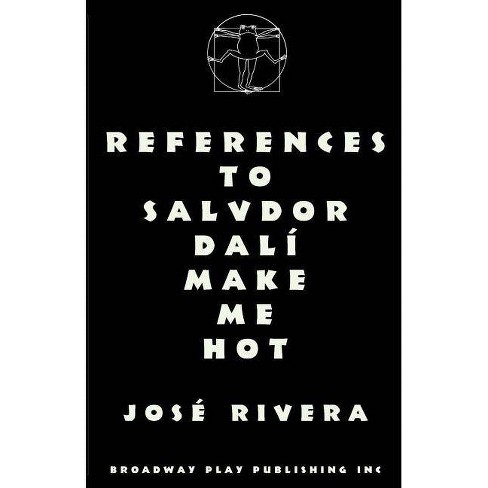 Set in the desert of Barstow, California, where Gabriela, the wife of career soldier Benito, dives into a surreal fantasy world during her husband's prolonged absences and imagines the mating rituals between a coyote and a cat. "On a moonlit July night in Barstow, California, strange, seductive things can happen, especially if you talk to the moon, which is portrayed as an aging, violin-playing dandy in a Panama hat and white suit. Don't expect any literal answers from REFERENCES TO SALVADOR DALI MAKE ME HOT, Josï¿½ Rivera's surreal romance in which love, lust and longing mix it up, bewitching a twenty-seven year-old housewife awaiting the return of her soldier-husband from overseas. Rivera's intriguing fantasy ... celebrates the confusion that grows out of trying to understand not only the one you love but yourself as well. It is a meditation on the impossible, but told in a provocative manner by Rivera, a writer whose language manages to be poetic and earthy at the same time." -Michael Kuchwara, Associated Press ..". marvelous and satisfying ... In DALI, Rivera ... imagines Gabriela's dream world as rigorously as he does her real world, striking a balance between the two with the affecting power of his language. ... a double-sided dream of intelligence and wit." -Gordon Cox, Newsday "The writing fluctuates between faintly surreal poetry and wryly pointed prose, cocky fantasy and bittersweet earthiness. Rivera manages the latter adroitly, but even the former is not without its moments ... a genuine comedy-drama that rises above the specific into the ecumenical. Particularly praiseworthy is the evenhandedness with which Rivera articulates the husband's and the wife's dilemmas, and his ability to anchor Benito and Gabriela in both their Hispanic roots and their ultimate universality. Their language is credibly down-to-earth, but with flights of a more literary wit and lyricism that, after the initial stages, avoid striking false notes." -John Simon, New York
If the item details above aren’t accurate or complete, we want to know about it. Report incorrect product info.